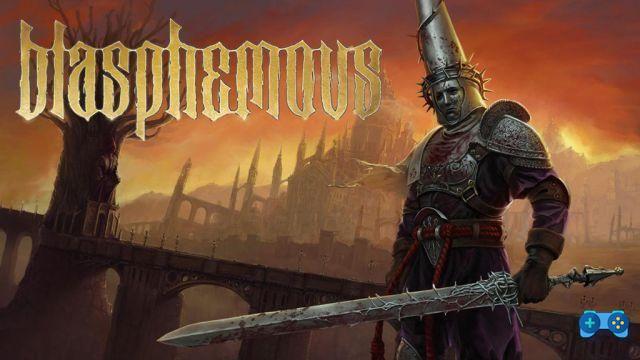 Many styles for a particular game

Today we will talk about Blasphemous, an indie title created by the guys of The Game Kitchen, a small independent studio based in Seville.

I'm pretty sure many will link the title to something "unclean" about religion, but this is the biggest mistake you can make.

In fact, the development team, during the appointment in Cologne, was able to specify how they studied in depth the dictates of religion, indeed they wanted to make known to the world what is the Iberian tradition of Catholicism, quite close to our own. .

This game draws heavily on illustrious and popular titles. It starts from the style, admittedly metroidvania, up to some game mechanics taken from the Dark Souls series and from the great little masterpiece Hollow Knight (do not forget to follow the guides of our Andrea Scibetta).

All seasoned to perfection with the unmissable retro flavor of the visual sector that masterfully combines pixel art with a true old-gen gameplay experience.

A faceless penitent and his journey towards the salvation of humanity

The story of Blasphemous puts us in the shoes of the last member of the Brotherhood of the Silent Penitents, who must complete his path of redemption amidst trials full of pitfalls.


Our "hero" brings with him two particularly distinctive elements: a conical helmet, typical of the brotherhood and the Mea Culpa, a sword that you can upgrade by continuing in the game.

Now let's move on to Cvstodia, a land that doesn't really exist, but full of references to the Iberian tradition, especially if we analyze the constructions on the seabed. The period that is proposed to us seems to be the medieval one, however, leading us to one of those gothic and fantastic worlds. 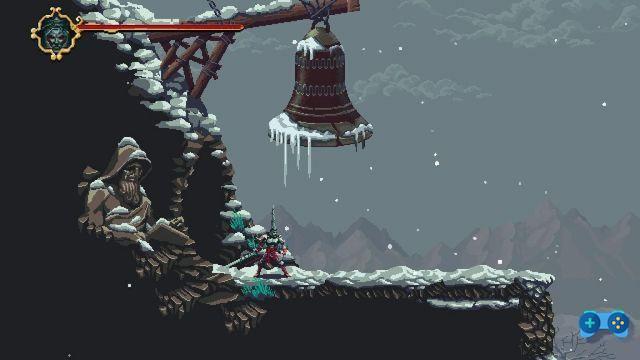 A land full of secrets

The town of Cvstodia will also offer you the opportunity to analyze some of the religious practices typical of the Iberian land of the time, such as self-flagellation, but everything is left to the player, without the boys of The Game Kitchen intervening to provide a reading .

This particular land is not limited only to making you discover religious traditions, in fact by searching in the most hidden corners you will discover other stories, secrets and imaginative places, where magic is not diabolical manifestation, but closeness to faith.

During this particular adventure, you will meet bizarre characters, gods, oracles and figures belonging to the afterlife, listen to them, many of them will offer you a series of side quests, some more fun than the same campaign.

The world of Blasphemous, like many souls-like, will not explain everything to you, indeed there will be many spaces that you will have to fill with your knowledge, acquired by browsing the menus and understanding the lore of each object.


The writing of the game, well translated into our language, will make this experience mystical, also thanks to the use of a language of the past by the different characters.

Let's move on to the actual game: Blasphemous at first glance does not offer an experience to remember, but don't be fooled by a slightly subdued start, the game gains depth as you advance in the adventure.

The title combines the platform mechanics typical of the games of the past with some decidedly more modern ones. Part of the difficulty is offered by some of these dynamics, starting from the rescues: our protagonist will be able to regenerate his energy, the potions (similar to estus flasks), the miracle bar and save only and exclusively near some altars.

The jumps themselves are not as simple as in many other titles: a trivial obstacle or distraction could lead you to start over from the last checkpoint, a frustrating experience after a while.

As for the combat system, we can safely say that it is something simple and effective at the same time. The Blasphemous team did not want to confuse your head with millions of frets: one is dedicated to attack and combos, one to dodge sliding and one to parry. Of particular pleasure was the inclusion of a mechanic similar to the Japanese harakiri, in fact by pressing Circle or B, the protagonist will give up a part of his health to recover the possibility of using the Miracles.

The opposite is true for the Boss fights, in fact the former will be too simple for the more experienced, often devoid of epicity, a factor to which titles of the genre make use, focusing on archetypes already known to the general public, from hyper fast enemies to slow and disturbing faces. .


The weapon that you will have at your disposal is only one, the Mea Culpa, a sword that will be delivered to you at the beginning of the game and which will demonstrate its usefulness by unlocking the skills present on the small skill-tree in the game menu.

To complete the RPG aspect of Blasphemous there are the rosary beads and the relics, the first useful to provide attack bonuses to the player. It starts with two slots available, subsequently increased to eight, collecting them all will make you the most powerful fighter in Cvstodia. Relics, on the other hand, are more rare and play a marginal role in the game. 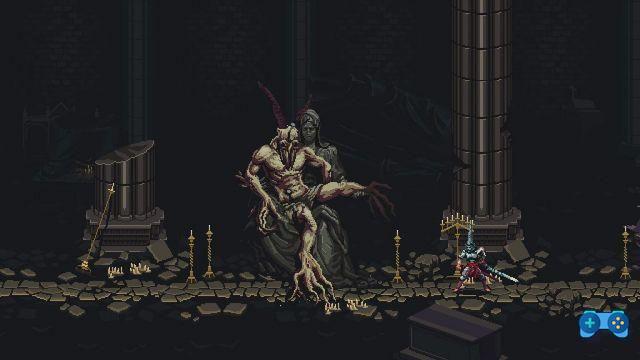 Technical-artistic sector, how beautiful is the world in pixel art!

It is true, we are in 2019, technological progress allows titles with the graph and a series of not insignificant innovations. However, it must be admitted that the work done in this sense by the guys at The Game Kitchen is really good, the retro and lo-fi aspect gives Blasphemous a unique flavor, which only old people like myself are able to appreciate.

Unfortunately, however, in the good work done by the development team, a small flaw must be noted: many game areas are particularly bare, without forgetting the recycling of some assets, from enemies to the environments themselves.

Unfortunately the same discourse also affects the sound sector, which embellished with Spanish melancholy melodies and touching guitar solos, must surrender to a certain repetitiveness.

- So many secrets to discover, for lovers of the genre

-... but every now and then it offers its side to bare and not very deepened worlds

Summary Blasphemous is the Metroidvania / Souls like that fans of the genre will love. The game world created by the guys of The Game Kitchen will be able to teach and amaze you, thanks to the game lore, linked to Christian iconography and the Iberian Catholic tradition. All seasoned to perfection with Pixel Art graphics, able to kidnap old school players and bring them back to the "good old days". Despite some shortcomings in both the gameplay and technical-artistic fields, the game offers at least 15 hours of gameplay, giving you the opportunity to explore every hidden corner of Cvstodia, discovering all the dark secrets it hides. the final
Microsoft reduces the price of the Xbox 360 Elite, now to 249,99 euros ❯