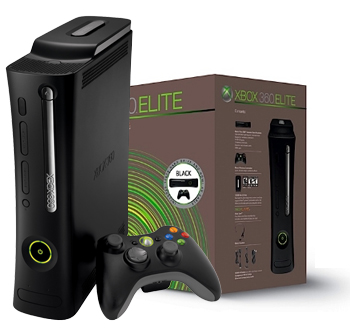 The counter-move has served

Microsoft has announced with an official communication that the Xbox 360 console in the Elite version will be sold at a price of 249,99 euros instead of the 299,99 euros imposed in the rest of the world. The Elite model is detailed since its inception by an HDMI video output, the unmistakable glossy black chassis, a 120GB harddisk. This marketing choice by Microsoft denotes the particular attention to a European public which is showing strong interest in the Redmond console.

Here is the official press release

With an unparalleled choice of titles and content at a great price, it's the perfect time to buy an Xbox 360 console

August 27th, 2009 - Xbox 360 today offers even more fun, more entertainment and more possibilities to connect with friends and family at an increasingly affordable price. From August 28, 2009, the price of the Xbox 360 Elite console with 120GB hard drive will be reduced by € 50 across Europe, moving to an estimated retail price of just € 249,99.


Xbox 360 provides gamers with all sorts of entertainment, allowing gamers to play games, watch movies and, starting next fall, keep in touch with their friends on Twitter and Facebook.1 Also, as announced in recent months, Xbox 360 will interact in the future with the new device codenamed “Project Natal”, ensuring a revolutionary controller-free gaming experience.

"With the Christmas season coming up, it's time to start thinking about gifts that everyone really likes," he said. Chris Lewis, Microsoft Europe Vice President of Interactive Entertainment Business. “Our goal for the next 18 months is to reinvent entertainment in people's homes and we want to make sure we have the right elements to help people make simple and informed choices about entertainment platforms. We know that price is a deciding factor in purchasing decisions, but we are also aware that consumers across Europe want value, benefits and complete entertainment experiences. We must meet all these needs to continue to grow and maintain success in Europe ”.

“With the € 249,99 Elite, we expect the Xbox 360 to enter even more European homes as the center of home entertainment for the whole family. Hundreds of games, 20 million users connected on Xbox LIVE, instant movie streaming, integration with the main social networks, and soon the exclusive interaction with Project Natal, make Xbox 360 the only console able to offer an experience of rich and complete entertainment at the most advantageous price ”he added Silvano Colombo, Microsoft E&D Country Manager. "Consumers have shown their appreciation for the Xbox 360 offering, so much so that in the first half of 2009, Xbox was the only console to grow year-over-year in Europe, recording a 22% sales increase in a market that in the same period decreased by 19% "


Having an Xbox 360 console in your living room means accessing all forms of entertainment at all times. All types of gamers, from those who love to play alone to those who prefer to have fun with friends, have hundreds of titles available in line with their style. Watch movies, interact with friends, and view photos from the comfort of your sofa. Not only that: Xbox LIVE allows you to have fun with other users from all over the world.

With all these new features coming for the holiday season and the future availability of “Project Natal”, which will be usable with any Xbox 360 console already on sale today, Xbox 360 ensures even more fun at an unmatched price.


The Xbox 360 Elite price reduction coincides with a realignment of the strategy for Xbox consoles in Europe to ensure that for all price ranges Xbox 360 is the most affordable option in each market. With the Xbox 360 Elite available for $ 249,99 versus the Xbox 199,99 Arcade $ 360, the estimated price structure to the public ensures freedom of choice, differentiation and value from the basic to the most advanced. Xbox 360 Pro with 60GB hard drive will be phased out from markets across Europe.

1 Xbox LIVE Gold membership will be required for Twitter and Facebook when available and required for Netflix. Games, media, and Netflix subscriptions are sold separately; a hard drive is required for storage.

2 Xbox LIVE Gold membership will be required for Last.fm and LIVE Party.

Xbox 360 is an advanced entertainment and video game system and has been hailed as "the most popular online console gaming service" - a Guinness World Record. In addition to offering the best games, Xbox 360 gives you access to more entertainment content than any other device connected to your TV, such as standard definition or HD on-demand movies, TV shows and music. Xbox 360 is the hub of whole-home digital entertainment and combines a variety of content, including music and personal photos, with the largest online social networking community with 20 million Xbox LIVE users, to deliver an experience of unlimited entertainment to share at home or with users around the world. With the addition of the system codenamed “Project Natal”, Xbox 360 will forever transform social gaming and entertainment with a whole new way to play - without a controller or pad. More information on “Project Natal” and Xbox 360 is available online at http://www.xbox.com/projectnatal http://www.xbox.com/it-it/.

Xbox LIVE connects more than 20 million users in 26 countries with each other and with their favorite forms of entertainment. In addition to making more content accessible than any other device connected to your TV, including movies, TV, music and games, Xbox LIVE is also a unified online social networking system that allows friends to stay in touch, wherever they are: in the living room of home or in different countries of the world. Xbox LIVE is also the only entertainment service to provide 1080p HD instant video streaming from Zune video. More information on Xbox LIVE is available online at http://www.xbox.com/en-us/live.

Microsoft, Xbox 360 and Xbox are either registered trademarks or trademarks of Microsoft Corporation in the United States and / or other countries. Other product and company names mentioned in this document may be trademarks of their respective owners.

add a comment of Microsoft reduces the price of the Xbox 360 Elite, now to 249,99 euros