Assassin's Creed Valhalla - Guide: where to find all the cursed symbols 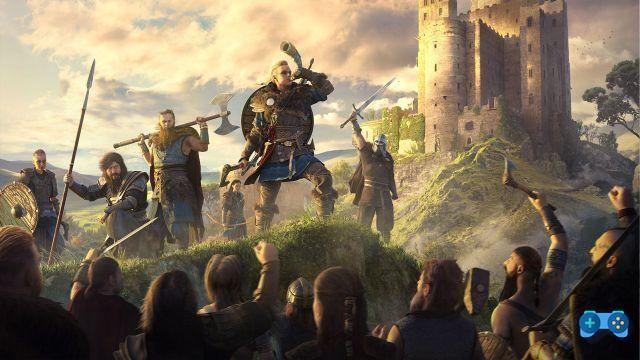 Assassin's Creed Valhalla boasts a very vast world full of things to do, offering hundreds of hours of gameplay especially for completists. If you are one of them, the “From Top to Bottom” trophy / achievement requires you to complete all territories 100%, a rather long-lived undertaking. One of the activities necessary for this goal is the destruction of cursed symbols scattered throughout the game map.

I 40 cursed symbols are recognizable by the icon

and contaminate the surrounding area. As mentioned above, once they have been found, they must also be destroyed and we recommend doing so using the arrows. In this guide we will show you where to find them all by dividing them by regions; note that the following have no symbols:

Furthermore, once you have destroyed 10 cursed symbols, you will also unlock the trophy / achievement "Dream Catcher".

Before we begin, here are many other Assassin's Creed Valhalla guides that may be useful to you:


It is located in the west of the region, just east of Tonnastadir. Go into the fog and take a good look to see the symbol hanging between two trees towards the central part of the area.

Look for a burnt house in the center of the region. To enter, climb to the roof and look through the rafters to find the symbol.

It is located in a small muddy area contaminated with poisonous gas. Climb on the shaft in the center and hit it until you break the cover. Once you have fallen inside, destroy the symbol.

It is located north of Farnningstone near a large lake. The cursed symbol hangs from the large tree in the center of the memorial. Climb up, locate the hanged corpse on your right and destroy the symbol.

Look for a cave northwest of Walden at the foot of a hill. Destroy the door, go through the opening and destroy the symbol immediately to your left.

East of Middelrun is a hut, right in the middle of a poisonous swamp. Once you reach the area, follow the wooden walkway to a board that will allow you to climb the hut. Destroy the door and then the symbol.

Strike the tsantsa (shrunken head) at the tip of the tree.

The entrance to the area where this symbol is located is quite far from the icon indicated on the map. You have to go to Grime's tomb and enter. Once you reach the room of the cursed symbol, go down to the flooded area to find it.

Hit the cursed head straight in front of you.

Look for a well filled with flammable poisonous gas, next to two fiery effigies. Light a torch and throw it at the gas to temporarily eliminate it, but be quick as it comes back after a few seconds.

At the end of the short path, destroy the "floor" with an arrow, go down, turn around and destroy the cursed symbol.

To reach this cursed symbol, you'll need to tear down a wall at the top of the path. To get a brazier, take the path to the left of the wall. At the top there is a cableway that will take you to the other islet in the lake and where you can retrieve what you need.

Once obtained, your goal will be to reach the island with the wall to be destroyed without falling into the water and without breaking the brazier. Turn north to find a tightrope between two poles: cross it and turn left.

Jump to the square raft, then turn left and jump back to the pole sticking out of the water, then immediately onto the next one. Look down for a rope.

Continue on this rope until you cross another one and keep following it to the pole at the bottom. Look left and jump onto a log which will allow you to return to the first island.

Throw the brazier at the wall to destroy it and finally destroy the cursed symbol.

Cross the narrow opening to enter the cave of your interest. Once inside, turn right to find several braziers, collect one and follow the path.

You will come across a cloud of flammable gas almost immediately. Place the brazier (do not throw it) on the ground, light a torch and throw it towards the gas. After eliminating it, take the brazier back and continue.

You will have to repeat what you did before two more times, after which you will arrive at the destructible wall behind which you will find the cursed symbol.

To reach it, climb the poles just outside the hut and jump to the tightrope on the area. Follow it up to the tree with the trunk splitting in half, then jump on the two poles.

Turn right and jump back to another pole. Climb to the top to reach the platform where the cursed symbol is located.

It is hidden inside a house with the door closed. The key is to the north inside a cave with a creepy depiction on the ground. Once recovered, go back to the house and destroy the symbol.

Destroy the entrance to the well at the point marked on the map and go down inside to find the symbol.

This symbol can only be destroyed by balancing on top of a nearby pole.

The symbol is located on a wooden platform at the top of a tree, but getting to a suitable spot to hit it isn't quite that simple. There are several ropes running through the area, but all have sharp spikes on the sides that prevent you from riding them. The solution is the shorter poles present at the edges of the marker marked on the map, which are small enough to allow climbing.

Go up the north rope, then move to the east rope. When you are about halfway down this rope, drop down on the one below you that leads south. Follow it and then move to the other that you meet and that ends on a pole. Climb to the top, turn around and from here you will be able to (barely) hit the coveted cursed symbol.

Pick up a nearby brazier and climb the broken tree. Throw the brazier in the center of the altar to destroy the symbol. If you fail on the first try, repeat the process.

Climb to the top of one of the large stones to be able to destroy this symbol placed on a tree. If you have trouble hitting it, use a fire arrow.

It is hidden behind a wooden barricade, under one of the rocks in the pond. You have to be quick because the poison in the air will damage you to the point of killing you.

Use the elevator to go up and reach the symbol to be destroyed.

Go to the back of the house and destroy the wooden part of the well to collect the key from the upper floor. At this point, unlock the door, take a jar of oil and head to the adjacent house. Blow up the wall and destroy the cursed symbol.

Hit the barricade and move the platform to find this cursed symbol.

This symbol is found inside the cage hanging from one of the branches. Hit her from the point shown in the second image.

Hit the cursed symbol from the location shown in the second image.

The symbol is found inside a poison pit. Equip a torch and throw it at the poisonous cloud. Go down, move first the corpse and then the obstacle to locate the cursed symbol.

Near the marker on the map is an access point that leads underground. Go down and move the obstacles to discover the cursed symbol.

Climb up one of the branches nearby to destroy this symbol which is in a prominent nest.

The symbol is hidden inside the pit with the poisonous cloud.

Climb to the top of the tower to find this symbol.

Once you reach the place, hit one of the ice sheets and dive underwater. Now use the Eye of Odin and swim to the key you see in the area (you will probably see two, but only one is accessible for now). Resurface and go down the stairs to open the door and find the symbol.

Climb the uprooted tree shown in the image to locate the cursed symbol to destroy.

Head up the hill near the house to collect the two keys (although you will only need one). At this point, enter the house and destroy the symbol.

Locate the cave in the hill, enter and destroy the symbol above the entrance to purify the area.

Look up and look into the branches of the central tree to find the cursed symbol.

Enter the cave and move the rock that prevents the other stones from moving. After doing this, continue on and you will find the symbol to destroy on a ledge.

This area sees the presence of a large circular structure. Climb it and go inside, then climb on the upper platform of the outer ring and walk it clockwise.

Jump to the platform instead of going down the stairs, then head to the door at the bottom - the cursed symbol is right next to it.

At the point indicated on the map you will find two caves. Enter the one on the left, continue and collect the key to open the door ahead. Jump to the platforms to your right to locate the cursed symbol and hit it.

Swim to the small island in the center of the lake and climb the wooden poles that support the fabric.

Jump on the rope attached to the central platform on the tree and destroy the cursed symbol.

On the hill there are a group of stones and a large pool of blood. Next to the latter you can see a corpse and a rock: move them to access the last cursed symbol.

Do you want to complete all the achievements and trophies and know all the tricks, guides and secrets for your video games? SoulTricks.com is a group of video game fans who want to share the best tricks, secrets, guides and tips. We offer the best content to be a source of useful information, so here you can find guides, tricks, secrets and tips so you can enjoy your games to the fullest. Are you ready to get all the achievements of that game that you resist so much? Enter and enjoy your favorite video game to the fullest!
Cooler Master presents the new Case Cosmos S ❯

Persona 5 Royal - Guide: How to get the best ending

PC vs Console: Which is Better to Play?

Add a comment from Assassin's Creed Valhalla - Guide: where to find all the cursed symbols