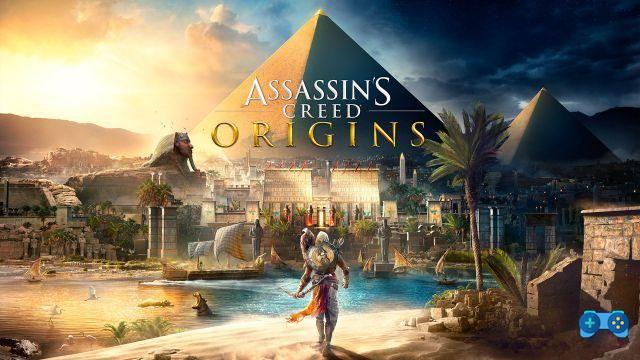 In detail everything you need to know to face the new Ubisoft title to the fullest.

Assassin's Creed Origins has been available for purchase for just over a month, and many fans couldn't resist returning to play the iconic Made in Ubisoft character.

I tend to immediately point out that this is not and does not want to be a review of the title, but simply a guide on how to deal with the same.

After two years of waiting, we are finally ready to return to the Animus, unaware of what we will find waiting for us. Assassin's Creed Origins is set in a vast, colorful and colorful Egypt; however, although some areas and structures are reproduced on a 1: 1 scale, the same cannot be said of most of the map.

The combat and exploration system has instead changed profoundly, giving a lot of wink to productions of the caliber of Dark Souls and The Witcher. Although I do not feel a lot of sympathy towards those who compare the FromSoftware title to everything that requires a minimum of study of the situation faced, I cannot fail to compare the combat system of the new Assassin's Creed to that of the production of Myazaki. On the other hand, exploration is practically a 2.0 version of the CDProjektRED kids' masterpiece.


Having said that, let's dive headlong into the guide.

It must be said that - like any noteworthy game - Assassin's Creed Origins has a prologue, and quite a long one too. This serves, in addition to introducing some characters and characterizing our Bayek, to make the user familiar with the game controls. Personally, the first thing I did, from fixed as I am, was to explore the region far and wide, trying to leave nothing to chance. And here is the first tip: at this stage, we could archive two trophies: the first is that relating to exploring a tomb, which is located in the western part of the map, easily accessible if you decide, as the undersigned did, to complete all side missions; the second is related to destroying 100 objects, as there will be at least three times as many in the map.

For the rest you can begin to notice the "insane details", as many people like to call them: for example, entering a dense vegetation or a crop, Bayek will widen the palm of his right hand in the style of Massimo Decimo Meridio in The Gladiator. In addition, the medjay's clothing will oscillate according to the direction of the wind. Again, if our protagonist were to crouch in the vicinity of cats, he will start petting them. Last but not least, the protagonist's voice will be muffled if you wear equipment that includes collars or in any case covers for the mouth. 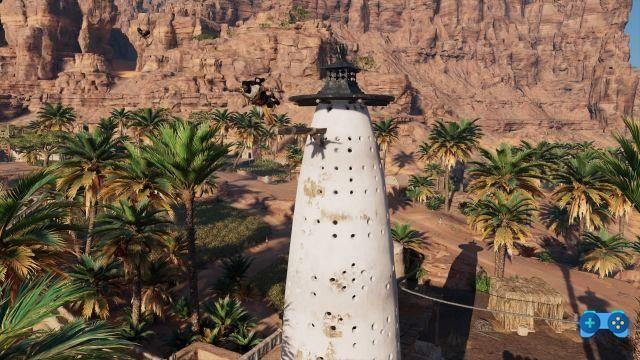 After the prologue, of which I will not give you previews, the real game will begin. Starting from just outside the Qattara Depression, our Assassin will be able to explore the world far and wide at will, level permitting. Emblematic was, at least for me, a post by a user on a group that, pompous to post his save with 66 hours of game recording, claimed to be able to start the main quest. All to understand the variety of approach that the title offers. First technical detail: from here, if you decide to use Senu, it will be possible to explore the entire map using the eagle as a vector, unlocking the relative trophy; among other things, it will also unlock the trophy of flying for 30 minutes with the eagle, as it takes much longer to explore everything. 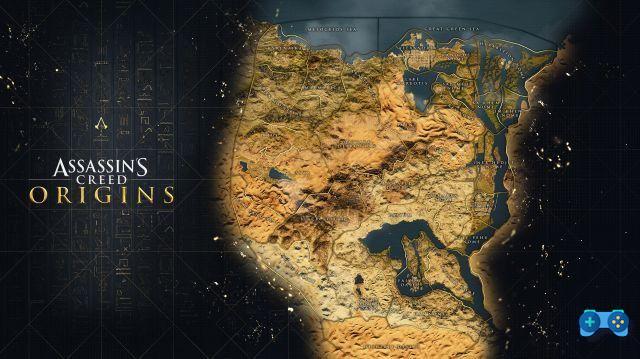 At the level of the plot I don't have much to say, or even to recommend; enjoy the game as you see fit, because surely your judgment is the best choice.

It is not a new fact that Assassin's Creed has always been harshly criticized for the combat system; although it was something innovative in 2007, acting as an inspiration for other productions, in the last episodes it felt the weight of the years. For this Ubisoft proposes a combat system that, together with the scalable difficulty and the three branches of skills, is completely different from its predecessors.

You can play stealth, with huge skills based on archery and applied to various bows or applied to unconventional bombs and supports, or direct, making Bayek a perfect death machine. Speaking here of "insane details", the medjay will hold each type of bow in a different way based on the weight and shooting technique of the same. Furthermore, the same discourse is applicable to weapons both of different categories and of the same category.


Furthermore, the enemies will no longer attack one at a time, but in a group, and the risk of death, especially at high difficulty, is no longer a hidden option: it will be necessary to precisely evaluate each move before attacking. The advice I would like to give you, as a veteran of the Souls, is the following: first eliminate any archer or ranged fighter, then focus on the ordinary enemies, paying attention to the elites armed with heavy weapons; the latter will be eliminated by perfecting every possible dash technique, continuing to slide under their slashes and beating a maximum of two blows. Furthermore, when dodging a blow, never aim far but always towards the enemy. For example: if an elite slash from right to left, an order to dodge to the right is given; by doing so, you will slip under the enemy's weapon.

Crucial point of the combat system: the war elephants. The undersigned has dealt with them around level 37, and I confirm that they are simple in their movements. If you have unlocked the ability that gives you an ultra attack early in the fight, use it immediately against the back legs of the pachyderm.

After completing this optional phase, focus on weakening the beast as much as possible.

If you prefer a hand-to-hand combat, keep hitting the rear legs dodging the ram that the giant trims from time to time towards the other leg. On the rare occasions when the enemy turns around, try as hard as possible to get behind him. When he loads instead, discard to the side and slide him, then trying to get closer to him again.

If you prefer a ranged approach, stand in front of him, preferably with a hunting bow and precision bow. Note that they are not mandatory, only those with the highest dpa in the genre, at the expense of faster execution. Returning to us, position yourself in front of the beast and hit only the legs, at most the chin when it raises the trunk; the latter, unfortunately, is covered by the armor and therefore invulnerable. When he charges at you, also here, discard to the side and then hit with as many means as you can at the elephant's rear end. On the rare occasions that you have the ultra skill, feel free to approach the beast and hit it with your primary weapon.

In the second phase structurally you will have to do the same, but paying attention to the arrows and bombs shot by those who govern the animal, however easily distinguishable given the indicator that will appear on the ground.

As for the elephants of the name of Uab, which take advantage of the 2 × 1 formula, always follow this guide, only being careful not to turn your back to one of the two, in order to always have the situation under control. 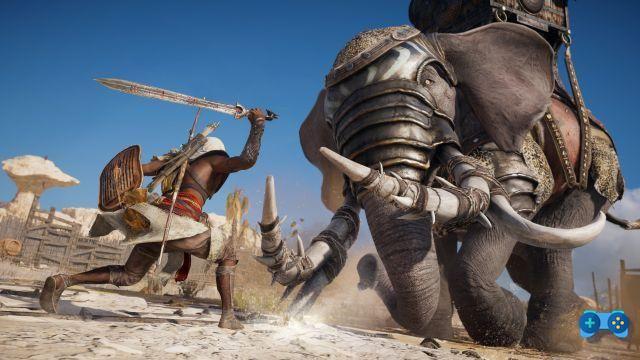 As for the exploration, I just point out some easter egg of the title. Wandering around Egypt, in fact, we will be able to find a hieroglyph depicting Noctis, directly from Final Fantasy XV, or a whale skeleton exploring the bottom of a pool of water. 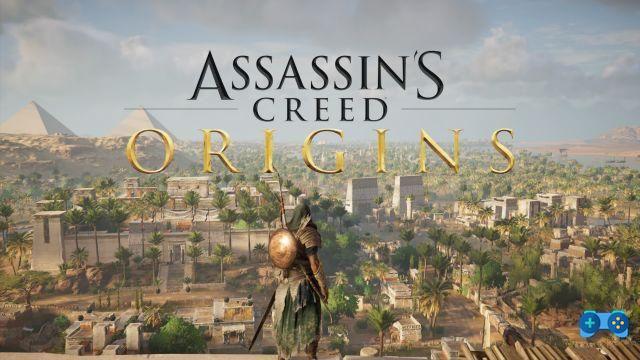 Assassin's Creed Origins is a title that deserves to be played, if only to be able to roam the map and admire the artistic beauty of the environment. Combat system, RPG system and open world leave a lot of breath to a player who can be overwhelmed by so much magnificence. My advice is to play it and enjoy it for what it is, and then focus on everything else it offers.

Assassin's Creed Origins is available for Playstation 4, Xbox One and PC from October 27, 2017.

Do you want to complete all the achievements and trophies and know all the tricks, guides and secrets for your video games? SoulTricks.com is a group of video game fans who want to share the best tricks, secrets, guides and tips. We offer the best content to be a source of useful information, so here you can find guides, tricks, secrets and tips so you can enjoy your games to the fullest. Are you ready to get all the achievements of that game that you resist so much? Enter and enjoy your favorite video game to the fullest!
Prey review ❯

Middle-earth: Shadow of Mordor, guide to Trophies and Achievements

Add a comment from Assassin's Creed Origins, alternative guide to the game