One of the most popular RPG sagas ever enclosed in an unmissable box.

The Elder Scrolls, translated: “The Ancient Scrolls”, is a series of role-playing video games developed over the course of 20 years. The protagonists of these incredible projects that have positively shaken the videogame market at each release are the guys from Bethesda Softworks, of the ZeniMax Media group. Their long journey begins in 1994: while Doom echoes triumphant and more and more PCs acquire power and attention, the first episode of the saga called “Arena” hits the market attracting a lot of attention. Compatible with MS-DOS, it has managed to give a breath of fresh air to a genre, that of RPGs, still seen in the West with a bit of hesitation.

It will then be with the years to come, with the complication of the events of the fantastic universe and then, in 2003, with the arrival of Morrowind, that finally all the work done will bear fruit. That of The Elder Scrolls is a saga that aims to be appreciated in the long run; these are not short video games and above all digestible by too large an audience: they are titles that can be enjoyed after hours and hours of commitment, but also a lot of fun. They've kicked off mod season and provided the community with tools to indulge creativity in a way few other titles have. There are those who identify the saga as the most complex and also as a reference point of the genre, and there are those who instead criticize the too vastness of the game environments and the enormous amount of hours required to complete the plots of the episodes.
But we are not here today for a review or analysis of the saga that would require an entire book of study. Not at all. We are here to tell you about a product, a must for collectors and for those who have some feelings to share with the lands of Tamriel.
The practice of enclosing entire sagas in anthologies, and perhaps attaching in-depth manuals or other gadgets, is increasingly in vogue. In Bethesda, a request that has been fueled for years has finally been granted. If you have never played a single episode of the TES saga, or if you have missed some, today at a really low price you can fill a serious gap, if you are passionate about video games.
The box as you will see in the photos is minimal, an aspect that for some is an excellent justification for the price, but for the purists of collectible products this is more an Achilles heel.

First of all, the product turns out to be very compact. As soon as we take the box out of the plastic container we have to extract what is basically a sort of booklet, the pages of which are filled with drawings belonging to every single episode of the saga. On the same pages then there is the CD / DVD of the reference episode to use for the installation. Beware because The Elder Scrolls: Anthology is exclusively for PC. 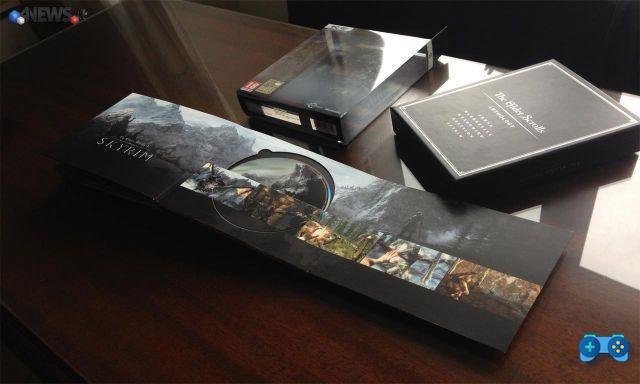 Here is the full list of episodes:
- Sand
- Daggerfall
- Morrowind (and the expansions: Bloodmoon and Tribunal)
- Oblivion (and expansions: Knights of the Nine and Shivering Isles)

- Skyrim (and the expansions: Dawnguard, Hearthfire, and Dragonborn)

At the end of the book there is a page which contains all the game maps and we have attached two sheets to them: one containing the beta code to access the test session for TES: Online; the other in which a Steam code with which to download the digital versions of Morrowind, Oblivion and Skyrim.
The whole thing is tremendously practical. For € 50,00 you will take home the whole TES saga, but without the Spin-Off titles: Redguard and Battlespire. You can find the package in any dedicated video game store or in the numerous online stores.

The Achilles heel mentioned earlier is that to be an anthology it is complete, but also far too delicate. Each CD / DVD is enclosed in the cardboard and extraction inevitably involves the generation of micro-scratches that accumulate in the long run. You will notice in the photo that portrays the Oblivion page that the DVD is inserted in an "atypical" case, well, the writer preferred to use it because the DVD, after the first and difficult extraction from the box, gave some beautiful scratches.

If it were not for the rejected decision to insert cloth to protect the CD / DVD we would be in front of one of the most original, economical and practical boxes. Unfortunately no, not all that glitters is gold. But the price and the digital version of the games justify it all.

add a comment of Special The Elder Scrolls Anthology