NVIDIA Tegra X1, the superchip as powerful as Xbox One

Lots of power, but for what?

From CES in Las Vegas literally comes a bombshell for the mobile market. NVIDIA has indeed launched its own SoC TEGRA X1 capable of 1 Teraflop processing power. The new 64-bit octa-core Superchip upsets the plans announced last year by the American manufacturer, introducing ERISTA technology a year in advance.

The new SoC will match the power of Maxwell GPU, (already used in the very recent Nvidia 970 and 980) with a processor ARM Cortex A57 or A53, all produced with a 20nm process. 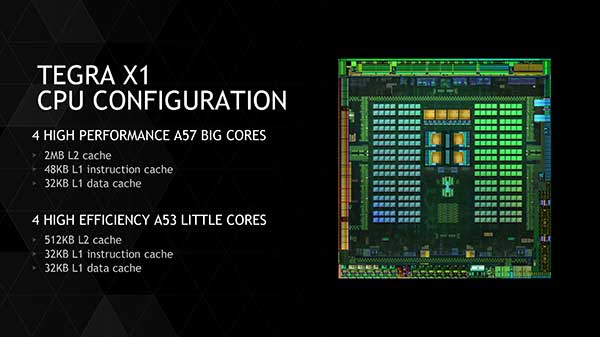 NVIDIA will use proprietary connection technology and cluster migration rather than the more common technology of Global task scheduling which exposes all 8 cores to user applications. The NVIDIA solution is though cache coherent, this means that the SoC does not suffer from the power / performance problems common to other systems of this type.


The new TEGRA X1 is able to surpass even the Samsung LSI's Exynos 5433 as regards the performance per watt with a 1.4x increase in power with the same amount of energy consumed, while the gap widens, reaching 2x of performance per watt compared to the solution Apple A8X. All this is also due to the choice of customizing the consumption management system, no longer the standard ARM one, but built in house by NVIDIA. 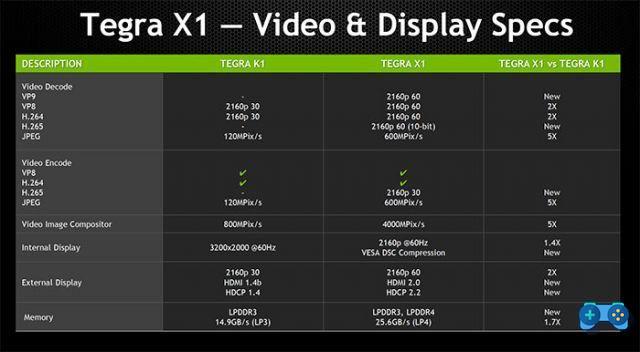 Specifically the new NVIDIA X1 SoC will guarantee a power of just over 1 teraflop which makes its performance in the graphics field, according to the manufacturer's statements, equal to those of an Xbox One and with 10 times lower consumption.

The figure appears slightly exaggerated if we consider that the processing power of the Xbox One GPU is equal to 1.33 teraflops (against 1.84 of the Sony solution with Playstation 4) but that nevertheless the power of the new SoC is a peak power, hardly in the field mobile, in fact, the approx Clock 1Ghz of this new processor, without dramatically affecting consumption and heating. More realistically (also seen how it went with the Tegra K1 which had to outclass the computing power of PS3 and X360 by twice), wanting to compare the new SoC to a console, the computing power under normal conditions of use of the new TEGRA X1 is comparable to that of PS3. The situation is different in the automotive field, where the desktop class performance of the new SoC can be released more easily. 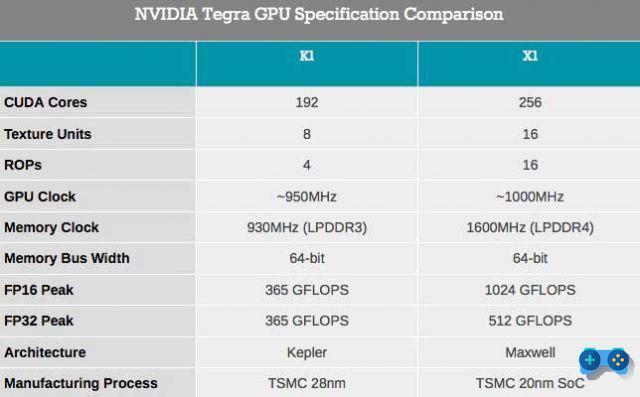 In fact, NVIDIA has already announced that all this power will be destined for new automotive infotainement systems and the new generation tablets (probably the new Shields), however we ask ourselves and the question seems more legitimate than ever, if it is really necessary to access this enormous potential on the move. The answer could be the new Nvidia Drive PX an autoguiding system which, thanks to the processing power of two Tegra X1 units, combined with 12 cameras should allow a fully autonomous and low-cost autoguiding system. The first X1 solutions should arrive during the first half of the year. We just have to wait to evaluate the new products based on this technology.

Do you want to complete all the achievements and trophies and know all the tricks, guides and secrets for your video games? SoulTricks.com is a group of video game fans who want to share the best tricks, secrets, guides and tips. We offer the best content to be a source of useful information, so here you can find guides, tricks, secrets and tips so you can enjoy your games to the fullest. Are you ready to get all the achievements of that game that you resist so much? Enter and enjoy your favorite video game to the fullest!
All Fire Emblem Echoes: Shadows of Valentia DLC announced ❯

Nokia 3.2, the rollout of Android 11 is underway

Add a comment from NVIDIA Tegra X1, the superchip as powerful as Xbox One