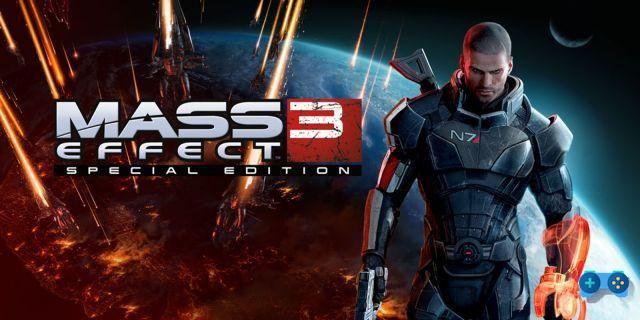 Everything you need to know to complete Shepard's third adventure.

The Mass Effect 3 universe is full of mysteries and secrets.

This article will shed light on a "Trainer" of nine tricks for all owners of Mass Effect 3 on PC, will reveal the location of all game weapons, will shed light on N7 and secondary missions that will allow you to receive fantastic rewards, will shed some light on the differences and benefits of importing save files from previous chapters.

The guide on how to solve each mission will be updated later.

In order to activate the cheats, you will have to start the game first, then press ALT + TAB to exit to the desktop and start the trainer.

Return to the game and during the game press the keys indicated in the table below on the keyboard to enable the relative cheat.

Note: The Trainer software is unofficial, so any use is your sole discretion and responsibility.

one shot one kill

Since the beginning of its development, the guys at Bioware had predicted that saving Mass Effect 2 in Mass Effect 3 had a big "weight".

The title came out last March 9, but the same Bioware it has never been clear what are the advantages and differences for those who opt for a “savedata” transfer of Mass Effect 2 in the third and final chapter.

Of course for all those who import saving the previous chapter in this new chapter of the series, they will have many advantages in addition to going to change different aspects of the game as a plot to name a few.

Let's see together all the differences and advantages that can be had by importing the save.

Premise: Below I'm going to “Spoil” some aspects of ME and ME2, so for anyone who has never played the second chapter or is completing it, be warned.

-All characters transferred to Mass Effect 3 from the previous chapter Mass Effect 2 they will keep their level and skills. The maximum level has been increased to 60 in the new Mass Effect 3. You will have a chance to get points to upgrade your team's abilities based on the imported level. If you import a level 30 Shepard you will have the opportunity to have an added point in each power plus another 59 to be able to spend at your leisure.
Note how credits and resources are reset and not transferred to the new ME3.

Upgrades to the ship:

- Primary upgrades to the ship are carried over. All other upgrades and research provided by Mordin will NOT carry over as well.

Based on how you finished Mass Effect 2, the following characters will appear in Mass Effect 3 optionally or as story-important (non-playable) “Characters”. Their presence and their behavior varies as previously announced according to the saving that will be transferred within ME3.


To end these substantial differences, we think the love relationships and the "weight" of the characters that are transferred from ME to ME2 and from ME2 to ME3.
Let's see together in detail.

- One of Ashely williams and Kaidan Alenko will die during the assault on Virmire. The one who survives between the two will be available as a teammate in Mass Effect 3.

- Shepard will be able to kill or spare Wrex during the Virmire mission. If killed, an even more gruff Krogan will take charge of the Wrex clan (during ME3). If rescued, Wrex will become the leader of his clan and help Shepard whenever he gets the chance.

- Queen Rachni can be killed or released during the Noveria mission. If released, an Asari will contact Shepard on Ilium in Mass Effect 2 and the story will continue in Mass Effect 3.

SPOILER ON MASS EFFECT 1 AND 2

As you may have noticed, the data saving of Mass Effect 2 and 1 will not only have a superficial weight in ME3 but will substantially affect the game plot!

Below we will publish a complete list of all the weapons in Mass Effect 3 and their position in the game in the hope that it will be useful to you.

The weapons I have divided by category so as not to create confusion in the reading.

INTRODUCTION: While reading the weapon locations of Mass Effect 3 there may be "spoilers" that could reveal various details of the "advanced" game plot.

M-23 Katana: In the “Priority: Mars” mission, it will be your starting weapon.

M-27 Scimitar: In the mission "Priority: Palaven", you will find it in the main Turian camp on the ground, once you have exited to complete your first objective.

M-22 Eviscerator: In the mission "Grissom Academy: Investigation", you will find it on a red sofa after you save the first student.

M-300 Claymore: In the mission "Attican Traverse: Team Krogan", you will find it in the abandoned field in the building on your left, once you enter.

Grail Thrower Spike: In the “Priority: Tuchanka” mission, he is found next to a guard waiting near the railing as the mission begins.

Disceple: In the mission "Lesuss: Ardat-Yakshi Monastery", it is found after discovering the lonely Asari, and after entering a combat room full of Cannibals and a shield generator.

Geth Plasma Shotgun: In the mission "Priority: Rannoch", you have to enter the large combat area with the Geth on a balcony. Kill all the enemies, and then search right from the entrance to the area to find this weapon.

M-11 Wraith: It will be available to purchase from the Specter terminal at the Specter Office located in the Citadel for 250.000 credits.

M3 Predator: First weapon, acquired during the ME3 Prologue.

M-5 Phalanx: In the "Priority: Tuchanka" mission, he is on the ground, up the steps leading to the stretch where the Reaper will start laser shooting your team.

M-358 Talon: In the “Priority: Citadel” mission, while in the C-Sec Headquarters, you will enter a dark corridor with four offices. The first office has the door locked. Proceed up the path forward to find a console that will open the office door. Go back and open the door, you will find the gun next to other weapons.

M-6 Carnifex: In the side mission “Arrae: Ex-Cerberus Scientists”, it is found on a pipe in the maintenance corridor before taking the ladder.

Arc Pistol: In the mission "Priority: Dreadnought Geth", it will be given to you by Tali.

M-77 Paladin: Can be purchased from the Specter terminal at the Specter Office located in the Citadel for 200.000 credits.

M-4 Shuriken: In the "Priority: Mars" mission, he is found inside a security room where Liara works on a computer. Get this weapon before activating the security console.

M-9 Tempest: In the mission "Tuchanka: Platoon Turian", you will find it on the ground after you defeat a group of Husks and after you climb up a ladder, entering the caves.

M-25 Hornet: In the “Priority: Citadel” mission, this weapon will only be found after entering the area and taking the elevator.

M-12 Locust: In the “Priority: Horizon” mission, it is located on the right side of the laboratory.

M-92 Mantis: In the mission "Priority: Mars", go down the ladder, look to your right to find the weapon on the ground.

M-97 Viper: In the “Priority: Palaven” mission, you'll find it on top of several boxes in the center of the main Turian camp.

M-13 Raptor: In the “Priority: Sur'Kesh” mission, this weapon will be found upstairs outside, when Mordin asks you to reset the elevator's power source.

M-29 Scoring: In the “Tuchanka: Bomb” mission, it is on a ramp once you exit the first combat zone.

Javelin: will be acquired during the “Rannoch: Admiral Koris” mission.

M-98 Widow: Will be acquired during the “Priority: Thessia” mission.

Black Widow: Purchase from the Specter terminal at the Specter Office located in the Citadel for 250.000 credits.

M-15 Vindicator: In the “Priority: Mars” mission, just before entering the Archives, you will notice a small security room just off the main corridor. The weapon will be in there.

Zappa M-96: In the mission "Grissom Academy: Investigation", it is found after leaving the classroom, look for the corridor with the red desks.

Phaeston: In the mission “Tuchanka: Platoon Turian”, it is found after you have hunted down a Harvester and come across some dead Turians.

M-76 Revenant: In the mission "Priority: Citadel", you will find it before the enemy engineer.

Geth Pulse Rifle: In the mission "Priority: Veil Perseus", you will find it near the control room.

M-99 Saber: will be acquired during the “Priority: Horizon” mission.

M-37 Falcon: will be acquired during the “Priority: Cerberus HQ” mission.

The Mass Effect 3 universe is really large and during the main story you will come across some N7 missions. They will seem secondary missions as they are not articulated in the main game plot, but they will be "special" missions that if completed will allow you to unlock greater rewards.

Let's see together what are the N7 missions, where to find them and what rewards they release.

Where to find it: It will be in the Normandy. Check your email to receive the mission from Admiral Hacket.

Where to find it: During the Tuchanka mission: Turian Platoon.

Where to find it: During the Attican Traverse: Krogan Team mission.

Where to find it: After finishing the Priority: Tuchanka missions, check your email.

Where to find it: After completing the Priority missions: Perseus Veil.

Where to find it: After completing Priority: Horizon.

The title is available from March 9 on the PC, PlayStation 3, Xbox 360 platform

The Dark Pictures - Man of Medan, the review ❯