FIFA 21 - FUT Ultimate Team, the strongest team in the Bundesliga 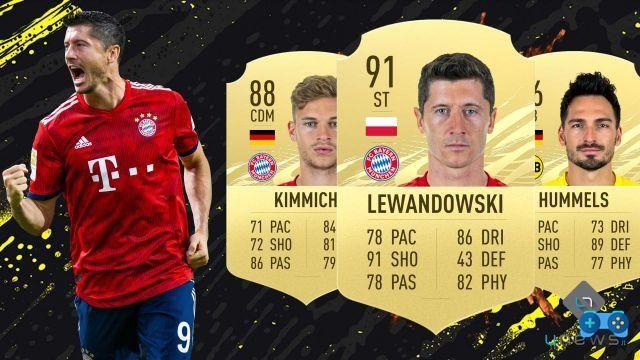 The adventure of FIFA 21 - FUT Ultimate Team started just over two weeks ago and we are now sure that you have managed to build an excellent team, including buggy players and more. But playing online you will find that the competition is very tight (and not always fair), so you will have to have very strong players.

Today we have dedicated our attention to the strongest team in the Bundesliga, a league that has become more and more interesting over the years, even with the absences of Timo Werner e Kai Havertz, both landed at Chelsea.

Manuel Neuer (OVR 89) - 46500/43500: The Champions League winning goalkeeper is definitely the best choice in goal. Its stats are almost all excellent, and the price isn't particularly prohibitive. So if you want the best of the best, the XNUMX year old Teutonic roller shutter is the perfect choice.

Yann Sommer (OVR 86) - 9700/10750: If you want to save your credits without giving up security in front of goal, the Swiss goalkeeper in force at Borussia M'gladbach is an excellent alternative.

Péter Gulàcsi (OVR 85) - 7300/8000: There is no shortage of quality goalkeepers in the Bundesliga. In fact, even the XNUMX-year-old Hungarian (with more hair than usual) could be the man for you.

Alphonso Davies (OVR 81) - 46750/40000: The 19-year-old Canadian is one of the most promising full-backs in the league, in fact, his sprint speed combined with 4 * Skill Skills, make him the forbidden dream of all FIFA Ultimate Team players.

Jérôme Roussillon (OVR 80) - 8200-6900: The French defender in force at Wolfsburg was the undisputed star of the hybrid and non-hybrid teams last year. Also in this edition it could be the player who makes the difference, especially if the cost of the Canadian alternative is still so high.


Nico Schulz (OVR 80) - 2200/2400: Always in case you want to invest your credits in other departments, the Borussia Dortmund defender is an excellent low-cost choice, which will in no way preclude your desire to build the strongest team of the Bundesliga.

Mats Hummels (OVR 86) - 11750/12000: The German international is always the perfect choice for a strong and rocky defense in set pieces, but his low speed could discourage you, which is why we advise you to accompany him with a defender with greater speed;

David Alaba (OVR 84) - 29000/26750: He is one of the most balanced defenders of this championship, in fact, he manages to combine offensive skills (speed and shooting) with typical characteristics of the role. In short, if you are looking for flexibility and safety, the Austrian is the man for you.

Niklas Süle (OVR 84) - 4200/4800: Despite the very competitive price, the 25-year-old Germanic is the right compromise between Hummels and Alaba, in fact, unlike the first, he has greater speed and counteracts the second with first-class defensive values.

Lukas Klostermann (OVR 80) 10500/9700: As it is possible to understand from the bizarre price, the good Lukas falls into the category of "buggies". This player manages to combine in a rather unique way, an excellent top speed and a more than discreet defensive attitude. To be taken into consideration.

Kevin Mbabu (OVR 79) - 4400/4000: While left backs and defenders abound, there is only one player to choose from on the right. The Swiss in force at Wolfsburg is cheap and has impressive statistics for his role, what more could you want?

Joshua Kimmich (OVR 88): 36000/36750: Over the years, the young Joshua has proved to be a flexible player and, like the legendary Philip Lahm, he is able to perform in an excellent way, both the role of right-back and midfielder of median (CDC to be clear ). Furthermore, by purchasing the 25-year-old Teutonic you will guarantee the performance of a balanced player, specialized in both sorting balls and defending the goal.

Denis Zakaria (OVR 83): 7400/6900: Every midfield full of inspiration and imagination requires an athlete with a unique "cazzimma", this is the case of the Swiss, a player capable of impressing with a cuirassier's size and a sprint as a centometrista . If you are looking for a low-cost Gattuso, he is the perfect player for you.

Marco Reus (OVR 85) -44500/41500: Even if he is no longer the player of a few years ago, the good Marco is still perfect to join the strongest team in the FIFA 21 Ultimate Team Bundesliga. Shooting, dribbling and passing make him a true beacon in midfield, in fact, he is able to carry out intoxicating actions and millimeter passes, without forgetting his deadly right.

Axel Witsel (OVR 84) - 3900/4400: The Belgian with thick hair, the dream of the great clubs in half of Europe, is a very interesting player, especially if you are looking for a physical midfielder who does not mind scoring. If you want a midfielder with the right characteristics to block most of the opposing actions, he is the right man for you.

Julian Brandt (OVR 84) - 6000/7000: This young midfielder will become a first-class player in the next few years, but already he can earn his presence among the strongest players in the Bundesliga. Thanks to its speed and 4 * Skill Skills, it will be able to take you in front of the opposing goalkeeper in no time.

Leroy Sanè (OVR 85) - 79000/72500: The German winger has left Manchester City to join Bayern Munich, so after years of being an ideal Premier League player it is time to make his mark in the Bundesliga. It is useless to talk about the potential of the player, the statistics speak for themselves, as fast as Bolt and good at headers, all seasoned with dribbling values ​​of excellent caliber. In short, a must-have.

Douglas Costa (OVR 84) - 31500/23000: Do you love the Joga Bonito style and can't help but have a player as fast as a train? The Brazilian winger is therefore the man who can satisfy your every need on the left flank, thanks to the values ​​regarding speed and dribbling.

Kingsley Coman (OVR 84) - 13500/11000: Here is another ex-Juve, this guy is the best "low-cost" choice for this role, and despite the cheap price he is able to compete at high levels with other players recommended. On the other hand we are talking about the athlete who significantly helped Bayern Munich in the Champions race.

Jadon Sancho (OVR 87) - 21000/24750: The 20 year old from England and in force at Borussia Dortmund is a spectacular player, he combines speed and dribbling, so much so that he is a real nightmare for the opposing defense, even before taking the field .

Serge Gnabry (OVR 85) - 9800/11500: Anyone who has played FIFA 20 knows this young German winger, he was one of the most used players online. This year EA has decided to weaken him slightly, but he is still a very high level striker, his dribbling skills combined with shooting accuracy make this 25 year old an alternative to consider.

Robert Lewandowski (OVR 91) - 116000/114000: The Polish giant in force at Bayern Munich is certainly one of the strongest strikers in the world, so it is almost an obligatory choice if you want to build the strongest team in the Bundesliga. Also, if you have extra credits, you can try to buy its IF version (for the modest sum of 269000-255000 credits). But be careful, he could soon be replaced by a Norwegian young man with high hopes.

Erling Haaland (OVR 84) - 45000/43000: The very blond Norwegian is in fact a real enfant prodige of the most beautiful sport in the world, he combines speed, shooting and body in a sublime way, and trust me, for what it's worth he is not so expensive. If instead you want to make an investment, its IF version is monstrous and requires a little economic effort as it costs 175000/175000 credits. 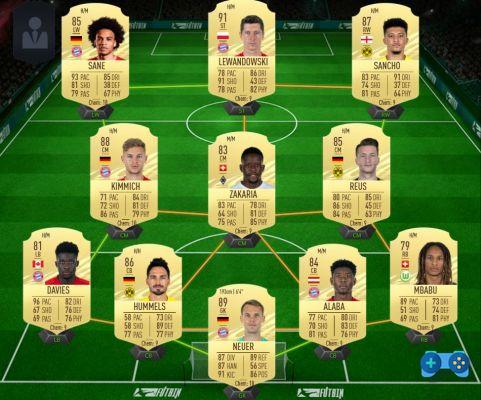 We hope this helpful guide to building the strongest team in the Bundesliga has been of help to you. In the coming days, we will bring you new guides dedicated to Ligue 1 and La Liga.

add a comment of FIFA 21 - FUT Ultimate Team, the strongest team in the Bundesliga