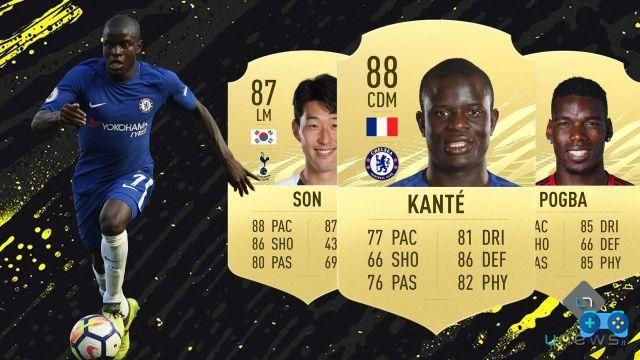 After our Riccardo has listed the most rocky defenders of the Premier League in FIFA 21 it is time to tell you about the strongest midfielders in the game, and trust us if we tell you that you will be spoiled for choice.

Paul Pogba (OVR 86): The French former Juventus player and currently serving at Manchester United is the perfect midfielder for your dream team, as well as one of the strongest midfielders in the Premier League. In fact, thanks to his physicality and his dribbling he will be able to lead your team to victory.

Georgino Wijnaldum (OVR 85): The Dutch Liverpool midfielder does not have characteristics that can make you scream miraculously, but each of them is particularly balanced, offering you a great element in the midfield.

Allan (OVR 83): The former Brazilian jewel of Napoli is an all-round athlete, in fact, he is equipped with all the characteristics to occupy every sector of the midfield, especially the defensive area. Physical and defense values ​​are excellent for a player with this overall.

Thiago Alcantara (OVR 85): The Iberian player is one of the strongest midfielders in the Premier League. As for Wijnaldum, he is an athlete who has made dribbling his reason for living, the latter, combined with the splendid vision of the game in his possession, will be able to dictate the times in midfield like a metronome. If you want to make an investment for only 68.000 / 77.500 credits you can buy its Ones to Watch version.

Wilfried Ndidi (OVR 84): The player in force at Leicester, unlike the Everton starter, is not flexible, but he is a force of nature when it comes to defending his team. From his 183 cm he sees the action of the opponent's game and with his 84 of physique he is ready to block any action. Trust me, he's one of those players your opponents will curse.

Thomas Partey (OVR 84): The former Atletico Madrid midfielder has decided to face the Premier League. The mighty Ghanaian boy is the midfielder that we all would like, in fact, he skilfully combines physique and vision of the game, which makes him one of the strongest midfielders of FIFA 21. If you have any credits, we recommend the Ones To Watch version (196.000 /212.000).

Fabinho (OVR 87): Liverpool's rock-hard midfielder could not be missing from this list. Always one of the most used players by gamers with a Dream Team based on the English League, the Brazilian will be an insurmountable obstacle for many, even if his low speed could betray him. For that, however, there is the Ombra style.

N'Golo Kantè (OVR 88): It's him or it's not him, but of course it's him. We are talking about the strongest midfielder in the game, in fact, the small French midfielder is a real tough nut to crack, his characteristics (despite the speed downgrade) are perfect for an athlete who has to take care of the defensive phase and relaunch the team's action. There is a small problem, it costs a lot.

Jordan Henderson (OVR 86): Too often we focus on impossible players, like Pogba and Kanté and we leave out interesting athletes like the good Jordan, who through the statistics at his disposal is able to better manage the midfield.

Kai Havertz (OVR 85): The young German talent, recently arrived in Britain, is a very interesting midfielder. His characteristics make him an extremely dynamic and resourceful player. From drunken dribbling to high top speed, all accompanied by a pretty good shot. Again, if you have a fair amount of credits, we advise you to aim for the Ones To Watch version (340.000 / 364.000).

Hakim Ziyech (OVR 85): The new Chelsea midfielder is a very interesting athlete, especially thanks to an innate vision of the game and a visceral love for geometry on the pitch. Of course, like any dribbler, he has a weak physique, but it can be easily remedied with an understanding style. Five stars of Skill Skill cannot be thrown in the bin, on the other hand. Also, if you have some credits to spare, the Ones to Watch version could be a very smart investment, as it has already climbed overall (140.000 / 175.000).

Bruno Fernandes (OVR 87): This midfielder didn't have much luck, but apparently the Manchester air did him good. In fact, we are talking about one of the strongest midfielders in the Premier League. Shooting, dribbling and passing are his strengths, and trust us if we tell you that he is a player capable of "shifting the balance".

Kevin De Bruyne (OVR 91): Born on FUT as a buggy player, the Belgian athlete has proven his worth with the Citizens and Red Devils jersey. If you are looking for the best midfielder in this league, he is your man, but to have the best, you will have to spend a few more credits than expected.

Lucas Moura (OVR 83): This year FIFA has changed its position on the pitch, but the Brazilian from Tottenham thanks to extraordinary speed and exceptional dribbling is always a great investment to make, especially if you play online.

Nicolas Pépé (OVR 82): The Ivorian under the Gunners is a player who in the coming years will enter the desires of all FUT players, if you do not have many credits and are looking for the most interesting right outside of the championship, without therefore changing the role to Right Wings of the caliber of Bale and Salah, he is a dignified choice.

Heung Min Son (OVR 87): If you play FUT online frequently you will hate this player, he is in fact one of the strongest winger in the Premier League, impressively combining speed, shooting (he is ambidextrous), dribbling and passing. Not for nothing, Mou calls him Sonaldo.

Marcus Rashford (OVR 85): After Lucas here is another player who has undergone a role change. The young Brit in force at United is a decidedly interesting choice. We are talking about a fast athlete with excellent dribbling, all without forgetting the characteristics related to shooting, inherited from his long militancy as a striker.

Wilfried Zaha (OVR 83): The Ivorian big boy of the Crystal Palace is a low-cost alternative to the aforementioned champions, he will be less accurate in his shot, but in the penalty area he is annoying as a mosquito. Thanks to him you will get quite a few penalties (especially if you love to dribble).

Steven Bergwijn (OVR 83): The statistics of the Dutch player of Tottenham are very similar to those of Zaha, so there is little to say.

Here ends the list of the best Premier League midfielders on FIFA 21 Ultimate Team. Let us know if this guide has been of help to you and which of these phenomena you field in the field.

Do you want to complete all the achievements and trophies and know all the tricks, guides and secrets for your video games? SoulTricks.com is a group of video game fans who want to share the best tricks, secrets, guides and tips. We offer the best content to be a source of useful information, so here you can find guides, tricks, secrets and tips so you can enjoy your games to the fullest. Are you ready to get all the achievements of that game that you resist so much? Enter and enjoy your favorite video game to the fullest!
MXGP 2 Review - The Official Motocross Videogame ❯

Square Enix, would you like to receive two Tomb Raider titles for free? Here's how to do it!

Battlefield 3, all multiplayer modes in detail

Little Nightmares 2 - Guide: how to defeat enemies and bosses

Add a comment from FIFA 21 - FUT Ultimate Team, the strongest midfielders in the Premier League (BPL)