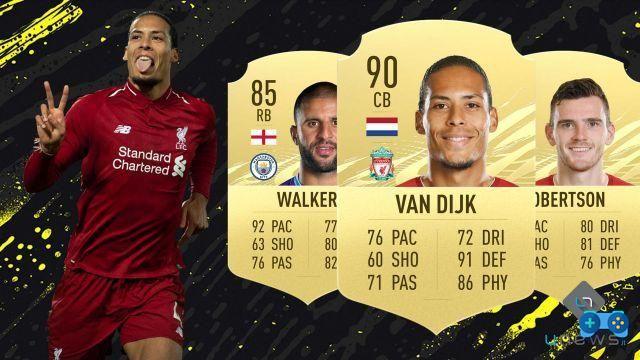 Virgil van Dijk (OVR 90) - The rocky Liverpool defender - unfortunately seriously injured a few weeks ago - is undoubtedly the strongest player in his role, until last year he was considered to be the best defender in the world (perhaps exaggerating with the praise). Either way, he absolutely must be present in every FUT defense

Aymeric Laporte (OVR 87) - He will not be very fast but he has a defense and a top player physique. Alongside Virgil it could really make a difference. He also received an impressive Rulebreaker card.

Toby Alderweireld (OVR 85) - Not as brilliant as he used to be, but the good Toby is still an excellent defender. Maybe as a substitute, if you play with 4-4-2 it can be fine. If, on the other hand, you prefer the 3-man defense, he could compete for the place with Joe Gomez.

Joe Gomez (OVR 83) - The other Liverpool defender - inherited the post (with burdens and honors) - of van Dijk. He is young, strong, both physically and defensively. In addition, it can count on great speed. A defense: van Dijk / Gomez, it would be a masterclass.

Antonio Rüdiger (OVR 81) - A player who had done so much well at Roma and from whom everyone expected great things. His growth has stopped but he is still a very good central defender. Discreet speed and good defense, all accompanied also by an imposing physique and height.

Nathan Aké (OVR 79) - Unlike the good Antoni, Akè continues its exponential growth. A good all-round defender, who could be used both as a starter and as a reserve.

Davinson Sanchez (OVR 81) - The Spurs defender has been a certainty for some time now. Owner or reserve? To you the choice!

Rúben Santos Gato Alves Dias (OVR 81) - The Manchester City defender does not have great speed, but he has an excellent defense and a great physique. Recommended reserve

Kurt Zouma (OVR 80) - The Chelsea defender represents a good reserve. Its price is low so why not take it to lengthen the bench?

Trent alexander-arnold (OVR 87) - The Liverpool full-back has practically everything - perhaps a little more gym wouldn't hurt - since his only weakness is his physique (71). But he absolutely must be among the Premier League's strongest defenders

Ricardo Pereira (OVR 85) - The good Ricardo is now a certainty for Leicester. He prefers both the defensive and offensive bands. A real talisman. And then it's cheap!

Kyle Walker (OVR 85) - Perhaps the most complete defender of the BPL. It definitely needs no introduction. Speed, defense, dribbling. Luckily he has only 63 shooting, otherwise he might as well have put him in attack.

João Cancelo (OVR 83) - The former Inter and Juventus full-back prefers attacking. In our opinion it can be bought but as long as you have two very strong central defenders and making sure that either the CC or the AS come back to the defense to give him a hand. In fact, Cancelo is not particularly effective in the defensive phase.

Aaron Wan-Bissaka (OVR 83) - 22 years old, Manchester United full-back, 183 cm. He can play with other recommended players and we are sure that in the years to come he will impose himself as the best TD not only in reality but also in the game.

Nélson Semedo (OVR 83) - Offers a lot in terms of speed and to support the attack phase, less recommended for the defensive one.

Andrew Robertson (OVR 87) - Impossible not to recommend him, he has everything you need to fill the role.

Lucas Digne (OVR 84) - A balanced left-back who excels above all in dribbling, defending and passing. It's not very fast but if you are looking for a player who can help the defense, Lucas is for you.

Alex Telles (OVR 84) - A beast, with the right style understood, can excel both in the proactive phase and in the defensive one.

Patrick van Aanholt (OVR 77) - Full-back speed suit. If you don't care about defending but only offending, that's fine. He also received a devastating Rulebreaker card (shame about the price)

Luke Shaw (OVR 81) - Luke Shaw concludes this guide on the strongest defenders in the Premier League. He has suffered a lot of injuries and is no longer as good as he used to be. However, he has excellent statistics and perhaps he could also be included in the list of buggy players as he is often the author of actions like a true champion.

We conclude here regarding the strongest defenders of the GLP. Appointment with the midfielders and then with the forwards!

Do you want to complete all the achievements and trophies and know all the tricks, guides and secrets for your video games? SoulTricks.com is a group of video game fans who want to share the best tricks, secrets, guides and tips. We offer the best content to be a source of useful information, so here you can find guides, tricks, secrets and tips so you can enjoy your games to the fullest. Are you ready to get all the achievements of that game that you resist so much? Enter and enjoy your favorite video game to the fullest!
Chronicle of Innsmouth: Mountains of Madness review ❯

Add a comment from FIFA 21 - FUT Ultimate Team, the strongest defenders in the Premier League (BPL)