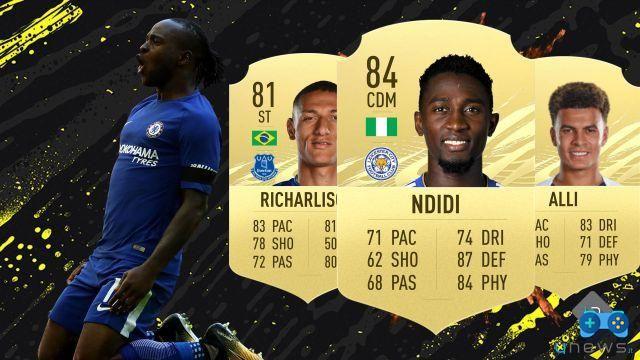 Among the leagues most used in the FUT- Ultimate Team mode di FIFA, there is definitely the Premier League. A league full of talents and established players that is really tempting to fans of the football iteration EA Sports.

If you are looking to build the best formation in the English league, with a budget of just over 100K, you are in the right place. In fact, we have selected the best squad achievable with this budget, to be precise 87.650 credits if you play on PS4 and 80.650 if you play on Xbox One. We remind you that the price of the players will change as the days and weeks go by.

Alternative like ATT: Gabriel Jesus. Price 62.500 / 52.000 credits. He has better dribbling than Richarlison, 87, as well as speed (85) and a devastating shot, 82. We know that at the moment such a figure is not for everyone, but if you can get there, you would have one of the best in your hands. forwards purchasable for PL. If you decide to take Jesus instead of Richarlison you will need a total budget of 120.150 credits on PS4 and 110.900 on Xbox One.

The team in question (excluding possible alternatives) requires a good budget but can boast a fast attack, a solid and well balanced midfield, reactive defense, fast and physically strong.

add a comment of FIFA 21 - FUT Ultimate Team, the best team in the Premier League for 100.000 credits