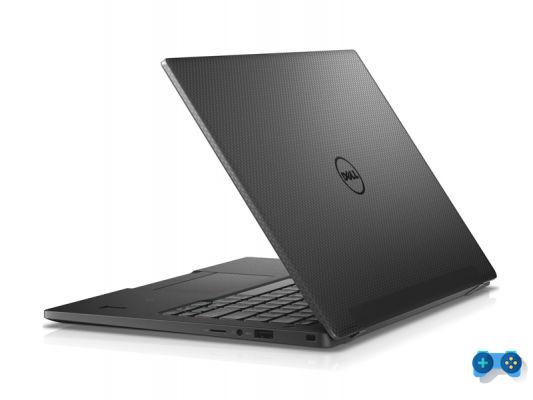 If you travel a lot in your work and are often at events, meetings and so on, one of the greatest comforts you can have is definitely a laptop that is always ready to use that allows you to access the Internet and write almost anywhere. times to be optimized. In some cases, however, the laptop is also synonymous with bulk and slowness, with devices that weigh a few kilos and take an eternity to turn on so much that they almost prefer pen and paper.

But if the notebook is a fundamental element in your daily life and you are willing to spend a not exactly indifferent sum (over € 1.000), Dell has the perfect solution for you: directly from the new 7000 series, the Latitude 7370 that we have had the opportunity to review is able to fully satisfy your needs, offering elegance, lightness and excellent performance in a business class notebook of only 13 ".

La package of the Latitude 7370 is very sober, as it is simply made of cardboard and shows the Dell logo on the front without images and product features. Inside, there is space for the ultrabook, the instruction booklet, the charger and 2 CDs containing the drivers and the operating system installed (although it would have been better to insert them on a USB stick given the absence of an optical reader).


In terms of design, Dell's ultrabook sports a simple and elegant line accompanied by a matte gray / black color and the back of the display made of aluminum with visible finishing of the same material along the entire side contour, which helps to further increase the resistance of the device making it definitely solid and devoid of weaknesses despite being of very limited size and thickness. In this regard, the Latitude 7370 measures 14,32mm x 304,8mm x 210,5mm (H x W x D) for a weight of just 1,12 kg. These characteristics, undoubtedly, make it easily transportable even in small suitcases or backpacks.

The same is true for the modular battery charger (as it is separated between power supply and socket), which is also not bulky thanks to a convenient winding of the cable around the body of the power supply which avoids the presence of wild wires or waste of time to rewind them every time. . The white light of the status LED of the charger is purely aesthetic and does not indicate the charge level of the ultrabook, a task left instead to another LED on the front of the laptop.

The Latitude 7370 boasts a backlit keyboard which, for an energy saving speech, turns off with a fading effect after several seconds of inactivity. The keys are very comfortable thanks to the slightly hollow shape and return an excellent tactile feeling; furthermore, since it is a small laptop, there is no numeric keypad, but it is integrated by pressing the Fn button, which also allows you to type other symbols and activate various functions using the keyboard shortcuts. The pad used to move the cursor is precise in capturing the movements of the finger and has two buttons that obviously correspond to the right and left clicks of the mouse.


When small sizes are proposed, however, we must always take into account some renunciation: the new creation from Dell, as mentioned, does not have a CD / DVD player, but manages to integrate a microphone and a small webcam under the screen. The unusual position and the low image quality, unfortunately, make it barely enough for video chats. On the front of inputs and versatility, we find a single USB 3.0 Type-A port, 2 Thunderbolt multipurpose ports, the 3.5 mm jack, 3 micro HDMI ports, microSD 4.0 card reader, touch fingerprint reader, micro SIM slot and lock slot. There is, of course, the wireless network card and bluetooth to connect it to other useful devices such as soundbars.

One of the strong points of this ultrabook is definitely the screen: the InfinityEdge anti-glare LED display deserves a special mention, as it is able to offer a Full HD 1080p resolution with incredible brightness and sharpness, returning an excellent viewing angle and almost a sense of being in front of an image with a higher resolution. It is also equipped with an automatic lighting function: in the presence of scenes with low light, the brightness decreases to give more emphasis to dark colors, and vice versa for more vivid and bright images.

Immediately after pressing the power button and loading the Dell logo, it took a few seconds to get to the Windows 10 desktop screen: all this thanks to a 2GB PCIe M2280 256 SSD mounted base (available on the ultrabook model in question and on the higher ones), which in addition to guaranteeing a high data reading and writing speed also allows you to save several files without having to worry about the lack of storage space after a short time.


Another strong point of the Latitude 7370 are its own technical specifications: in addition to the SSD, they also boast their presence a performing sixth generation Intel Core m5-6Y57 dual-core processor from 1.5 GHz and 8 GB of LPDDR3 RAM at 1600 MHz, in addition to an integrated video card which, rightly, is a suitable choice as it is not a gaming laptop or aimed at performing operations that involve heavy use. Using PCMark 8, we ran a benchmark that reproduced a situation of home / work use of the device and of which you can view the results in the gallery at the end of the article.

What we particularly liked is the total silence of the device since it does not have any heat dissipation fan, this is also thanks to the 14nm production process with which the CPU is made. It is therefore possible to use it practically anywhere without having to take into account special precautions to prevent the air from circulating properly inside the ultrabook. If you think this could result in excessive overheating, we can assure you that it does not suffer from critical heat zones, although in certain cases (for example, watching videos for a long time) you may notice a slight temperature increase at the bottom of the device; nothing alarming anyway.

Short mention to the audio compartment, which turns out very good for the size of the device and
sees the presence of two speakers positioned on the lower front side of the laptop, so as to exploit the surface on which it is placed to amplify the sound. At maximum volume, in some cases the two speakers seem to tend to distort almost imperceptibly, but in general they show no obvious signs of distortion. The sound, however, is clear and clean within the limits of an ultrabook. It is however possible to combine, for example, a possible soundbar to the ultrabook via bluetooth if you need more power.

To conclude, let's analyze a fundamental element in any mobile device, namely the battery. The Latitude 7370 has a decent autonomy and, under normal working conditions (writing and using common applications), is able to reach about 8 hours in duration with lighting set at 50%, just enough to make it to the end of the day. Watching videos or surfing the Internet a lot, however, the duration is drastically reduced, bringing the autonomy to only 3-4 hours; Fortunately, charging only takes a couple of hours thanks to the Thunderbolt charger.

Do you want to complete all the achievements and trophies and know all the tricks, guides and secrets for your video games? SoulTricks.com is a group of video game fans who want to share the best tricks, secrets, guides and tips. We offer the best content to be a source of useful information, so here you can find guides, tricks, secrets and tips so you can enjoy your games to the fullest. Are you ready to get all the achievements of that game that you resist so much? Enter and enjoy your favorite video game to the fullest!
The Legend Of Zelda Breath of The Wild, guide to the location of all Shrines ❯

USB ports not working: how to fix