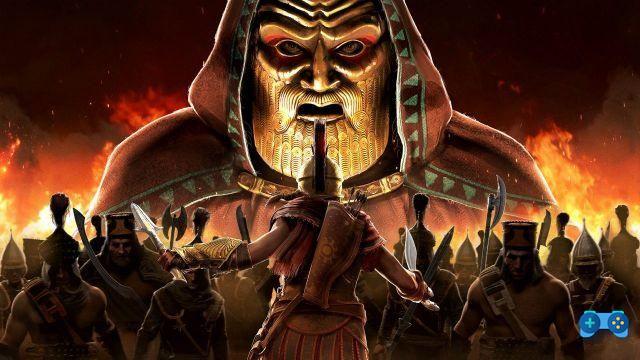 In Legacy of the First Blade, Assassin's Creed Odyssey's first expansion pack, Eagle Eye will face another powerful organization from the Far East: the Order of the Ancients.

With now all the episodes of The Legacy of the First Lama out, I feel ready to take stock for this new Alexios / Kassandra adventure from Ubisoft. Pad in hand, I set out for Macedonia, Achaia and Messenia, ready to discover all the new secrets and revelations on a world that - more and more - is updated and evolves.

In following the narrative, soon our protagonist will clash with the Order of the Ancients, a powerful organization born in Persia. The reasons for which it is found in Greece will be explained later in the game, and - in order not to spoil the pleasure of discovery - I will not mention it.

However, I can safely list the three branches of the Order divided by content. Not by my own will, I am unfortunately forced to have to give some slight anticipation on the obligatory members; therefore, read at your own risk. One thing, however, I will tell you immediately: as for the Sect of Cosmos, as soon as the identity of a member is detected, you will find an indication on the map of the location of the member.


Episode One - Order of the Hunters

In first episode, set in Macedonia, Alexios / Kassandra will hunt down the Order of Hunters. This branch takes its name from its wizard, the Hunter, who is also the last opponent of the narrative. In order, the members are seven and listed below:

Episode Two - Order of the Storm

In second episode, set in Achaea, Alexios / Kassandra will hunt down theOrder of the Storm. As in the first branch, this too takes its name from the pseudonym of its magus: the Tempest, precisely. In order, the five members of this branch are listed below:


Episode Three - Order of the Dominion

In third episode, set in Messenia, Alexios / Kassandra will hunt down theDomain Order. Unlike the first two eisodes, in this the branch does not take its name from the magus at its head. In order, the seven members of this branch are listed below:

You have already seen the guide to Sect of Cosmos? You can find it here! Also, if you are also interested in the Odyssey trophy guide, you can find the same here. In that guide, many other micro-guides are listed, such as the location of Atlantis, the guide to the endings, and much more!

Nokia 3.2, the rollout of Android 11 is underway ❯

add a comment of Assassin's Creed Odyssey, the Order of the Ancients