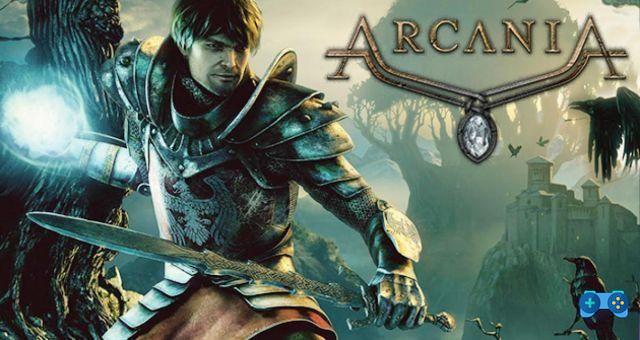 Gothic or not Gothic? That is the question…

Originally arrived on PC, PlayStation 3 ed Xbox 360 5 years after the release of the third chapter of Gothic and its expansion: Forsaken Gods, ArcanaA: Gothic 4 is a narrative sequel to the events that took place in the expansion after the reunification of the kingdom of Myrtana happened through the nameless hero, now called Robhar III and possessed by a relentless demon who craves blood and destruction through the aid of war.

ArcaniA: The Complete Tale is the version for PlayStation 4 of the title, and in addition to presenting a graphic update, it will contain all the expansions previously launched within the package.

Inhabitant of a village on a small island, our hero - originally a shepherd - will unwittingly start his adventure when he decides to ask his fiancée's father for permission to marry her; the man, who does not consider the pastor worthy, therefore decides to allow him to marry her but only if he is able to pass three tests.


These three tests will act as tutorial and they will explain the mechanics behind the title; once completed we will start a series of unpleasant events that will take us away from the island and in search of revenge against the Cursed King: Robhar III.

Clearly there will be twists and turns, despite the narrative being of a very low level and the often predictable adventures. It is also worth noting the ineptitude with which the “cut-scenes” of the dialogues were created; we will often find ourselves talking to other people whose faces will be covered by a text box or with very unconventional shots, and we don't even want to talk to you about the nonsense speeches that we will find ourselves listening to.

ArcaniA: The Complete Tale it is proposed to us exactly as it was proposed on PC and on last generation consoles: incomplete, defective, unnatural, slow e full di many others defects. The control system is indeed inaccurate and unreliable; it is no coincidence that we will often find ourselves having to face an enemy and rather than hit him throw a sword blow into the void, for an as yet unclear reason.

Even the battles, once started, do not feature a great level of challenge; we will often find ourselves repeatedly pressing the attack button, not caring to defend or dodge, as even the healing objects are found with simplicity and in large numbers during the adventure.


La freedom of exploration that we believe we have, in reality, it is very basic; the areas will in fact be unlocked as we progress through the story, and albeit large they do not hideoften great treasures or secrets, but mostly recipes or objects that we can use in the creation menu. Even for what concerns the secondary missions it cannot be said that they are worth carrying out, the only valid reward are in fact the experience points, as it is unlikely that we will be given some piece of useful equipment or indispensable objects.

We now want to devote an entire paragraph to bug and of defects that plague the game; in fact we advise you to stay away from the cliffs, to avoid being thrown close to the sea, and die (our shepherd, alas, cannot swim); of save very often, as the game is plagued by numerous bugs that completely block the execution of the title (it will be necessary to force the console to shut down); not to care for people inside houses or guards, we will be free to steal without any consequence.


ArcanaA it may have been much, much more than it is now, but a poor accomplishment of the title from the point of view of gameplay can not help but heavily penalize the final result.

Also from a technical point of view ArcaniA: The Complete Tale fails to surprise; from the graphic point of view the title is obviously dated and although the porting allowed the use of a better resolution and some filters able to improve the visual quality, it is evident that the texture and of polygonal models remained the same, giving a sense of "Old-gen" to the entire production.

La colonna sonora and dubbing they are easily forgettable, having regard to theirs poor quality e depth.

Do you want to complete all the achievements and trophies and know all the tricks, guides and secrets for your video games? SoulTricks.com is a group of video game fans who want to share the best tricks, secrets, guides and tips. We offer the best content to be a source of useful information, so here you can find guides, tricks, secrets and tips so you can enjoy your games to the fullest. Are you ready to get all the achievements of that game that you resist so much? Enter and enjoy your favorite video game to the fullest!
Complete guide to Destiny lore ❯

Add a comment from ArcaniA Review: The Complete Tale