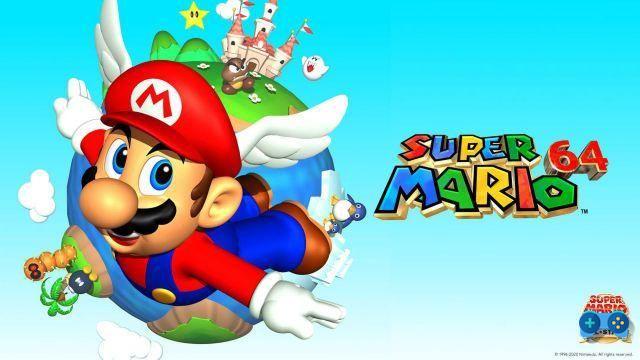 It has recently landed on switch the Super Mario 3D All-Stars collection, which, as you well know, hosts the most important titles in three dimensions dedicated to the heroic plumber.

The games contained are: Super Mario 64, Super Mario Sunshine e Super Mario Galaxy. In this short guide, however, we will deal with the first title, released in Europe in March 1997. The title provides that to release the Princess Peach from the clutches of Bowser, our hero must collect at least 70 Stars.

However, if you want to fully relive the atmosphere of this masterpiece, we advise you to make an extra effort and collect all 120 Stars. Doing the math, the Stars that you can collect by completing each picture are 105, where then are the other 15 hidden? Find out with us.

PS At the end of each explanation you will find the dedicated video, do not worry if the cover image is the same, the movie will start right from the "capture" of the Secret Star described.


1. Go down the Princess Toadstool slide

This is the first Secret Star to obtain, to do so you just need to enter the door that requires 1 Star at the top right and “cross” the fake glass window that you will always find on your right. Once you enter the level, become familiar with the slide and finish it. At the end you will find a golden cube complete with an exclamation point, destroy it and the star will be yours.

No, you don't have the trivia, you can get two Secret Stars right in the same place, to get this you just need to go back down the same slide and get to the finish in less than 21 seconds. So belly down and slide!

You know the magnificent room that takes you to the painting depicting a wreck of a ship? Well, look around, you will find two indentations in the wall, one on your right and one on your left. The second will give you a life, while the first will lead you to search for 8 red coins inside an aquarium, it will not be a titanic undertaking, you just have to remember that taking the coins will also make you recover health.

Some achievements require a precise amount of Stars, once you have accumulated 10, you will find that the entrance hall of the Castle is irradiated by a beam of light. Head towards the drawing of the Sun that you see on the ground and look up, you will be magically catapulted to another place. Even in this level you will have to collect the 8 red coins scattered in the air and we advise you to do so before activating the Red Button, some are unreachable otherwise.

To get this Secret Star you will have to reach the basement of the Castle and go to the door that has a star, but without numbers. Once inside, reach the cute dinosaur named Bibi or Dorrie (which you should have already seen after taking the first Star of the level), this time, however, be accompanied to the platform with the metal door. Enter and dive into the magical mud, once done, you will have to collect all the red coins (in water and not) and activate the Green Button, the latter necessary to transform you into Metal Mario.

If you want to reach the 120 Star milestone in Super Mario 64 and complete the first chapter in Super Mario 3D All-Stars, you will have to suffer a little, but surely you will have fun. In this case we are talking about one of the routes I loved when as a child I lost afternoons and diopters in front of the television.


Returning to the present, to unlock the Hat that makes you invisible you must access the basement of the castle, go to a wooden door with two blue flames at the top (there are two identical, so be careful). Once inside, swim until you reach a room with two pillars submerged in water, make a nice crash on the ground on both of them and you will see that the water level of the castle will drop magically. Head towards the small iron door no longer submerged and you will find yourself in the courtyard of the Castle, always go right until you find a hole in the ground, be brave and jump into it.

Once done, you will have to collect the 8 red coins inside the level, take the Secret Star and launch yourself into the void (rest assured, you will not lose a single life).

7. Toad (near the Labyrinth Cave World)

It's all quite simple, enter the door described in the paragraph of the fifth Secret Star and talk to the Toad under the stairs, after listening to his "wise" advice the funny mushroom will give you the coveted Star.

8. Catch the Cellar Rabbit (after getting 15 Stars)

Once you have collected 15 Stars, head to the dungeons. Once there you will see a cute yellow bunny in front of you, catch him (if you can) and he will give you one of the hardest Secret Stars in the game.

9. Catch the Cellar Rabbit (after getting 50 Stars)

In this case, the same dynamics apply as above.

You can reach this Secret Star once you reach the First Floor of the Castle, after gaining access talk to the Toad near the small picture with the mushrooms. Listen to it until the end and you will be rewarded with a beautiful star.

11. Toad (near the Knocked Pendulum)

To access the Second Floor of the Castle you need to have earned 50 Stars, once you enter you will see a large pendulum in front of you and a Toad to your left, talk to him and he will give you another precious Secret Star.

12. Collect 8 red coins in the clouds

Once you reach the 7 Stars you will be able to face Bowser for the first time, once you reach the door with the maxi Star, enter and be fooled by the trap that the good King of Koopas has reserved for you. Once there, before reaching the Boss remember to collect all the red coins and get a new Secret Star.

The same criterion applies to every challenge to Bowser, before reaching the Boss try to collect the 8 red coins.

Also in this case you will have to reach Bowser, but before ending the battle collect all 8 red coins (for the last time) and conquer the fifteenth Secret Star.

And you, are you taking advantage of the chance offered by Super Mario 3D All-Stars to replay this iconic masterpiece? Let us know in the comments if this short guide to Super Mario 64 Secret Stars was useful to you and if you want to see other guides.

Do you want to complete all the achievements and trophies and know all the tricks, guides and secrets for your video games? SoulTricks.com is a group of video game fans who want to share the best tricks, secrets, guides and tips. We offer the best content to be a source of useful information, so here you can find guides, tricks, secrets and tips so you can enjoy your games to the fullest. Are you ready to get all the achievements of that game that you resist so much? Enter and enjoy your favorite video game to the fullest!
RE Review: TURN One way trip ❯

Luigi's Mansion 3 - Guide: how to find all the gems of floors B2 and B1