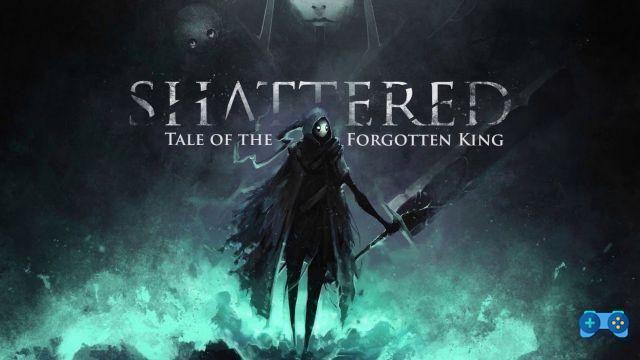 The day February 17 2021 the independent French firm Redlock Studio published Shattered - Tale of the Forgotten King. It is an action RPG with a dark atmosphere in which the player will be called to explore a three-dimensional world with rather dark colors, in an attempt to retrace the events that led to the fall of civilization e to the disappearance of the King.

Shattered - Tale of the Forgotten King unfolds in front of the player a continent in ruins, ready to tell stories never heard before and haunted by powerful enemies. There are many secrets to be revealed for the brave who will dare to challenge the roads of the world of Hypnos: some of them will help the lonely protagonist of this adventure, known simply as “The Vagabond” to illuminate the road that led to his existence.

Combat based on skill and accuracy it's a intense 2.5D platforming are the cornerstones of the gameplay that is the background to a complex and branched narrative in the intricate universe of Shattered - Tale of the Forgotten King.


“I had walked through forgotten streets for days, weeks, months, before reaching the Palace of a Thousand Doors. A place where only Silence reigned. Where the wind had stopped and the tides had receded with the Great Rift. The Great Abandonment.

And now I was there, immersed in the mists of past and future memories, standing in that mythological place that stood there, still, motionless. The only place anyone on Hypnos could have found without needing a compass or maps, back in the days when the King was still on the Throne.

And I remember the Silence in My Soul. The bitter taste of the Rain in the middle of the Wind. "

A whole world to discover: the game has as its setting a semi-open world, dotted with paths with multiple branches and mysterious secrets to discover. The game zones each tell a different story, with one spectacular artistic direction it's a refined level design.

Monstrous enemies to defeat: to prevail in combat it will be necessary studying opponents, anticipating their moves and turning against their own attacks. It is possible to quickly switch between close combat attacks with the sword al casting deadly spells from a distance to dominate the battlefield. The transition from 3D to 2.5D battles happens seamlessly.


A long and reasoned development: Shattered is the product of over ten years of work based on creativity and imagination. The minds of Redlock Studio they worked hard to conceive an entire, epic reality and translate it into play from their imaginations. Tale of the Forgotten King promises to be the first - but certainly not the last - step into the world of Hypnos. Other games are already in the pipeline.

A personalized story: Not all survivors of Hypnos are trusted. Some will help the protagonist in his path, others will just try to use it for their own purposes. But everyone will remember the choices made and the decisions made during the adventure. And only the most attentive and focused players will be able to discover the Truth hidden behind the veil.

Constant progress: The Wanderer evolves. It does this through combat, but also with exploration. And it's up to the player to decide the "how". How will you decide to use the limited resources available? To increase one's strength or to discover another of the truths of Hypnos? To buy a new weapon or upgrade spells? The choice is free, but beware: some roads may preclude others.

Shattered - Tale of the Forgotten King It is available for PC su Steam from February 17 2021.

add a comment of Shattered - Tale of the Forgotten King: available on Steam