Risen 3: Titan Lords is the latest effort of Piranha Bytes. This is an Action / RPG released on PC, PlayStation 3 ed Xbox 360, distributed by Deep Silver and available from 15 August 2014; Risen 3: Titan Lords is the third installment of the series which, recovering play styles and mechanics from previous appearances, takes up and amplifies what we have been able to play and experience in Risen 2: Dark Waters. Having particularly appreciated Risen, Risen 2: Dark Waters at the time made us turn up our noses a bit, proving to be a good pastime, but failing to surprise and innovate in the same way as the first chapter did back in 2009. Among major changes to the engine, numerous changes in the game mechanics and combat style (such as the introduction of firearms), the second chapter was, in a sense, a marked deterioration considering what Risen managed to obtain, making the whole world rediscover the pleasure of a role-playing game inspired by those masterpieces that are part of the Gothic. Now, forgetting the past for a while and dedicating ourselves entirely to the new chapter of this precious franchise, we are here, for you, to analyze strengths and weaknesses and to list the various features and mechanics of the game. We wish you a good reading!

Our adventure in Risen 3: Titan Lords is divided into two main phases: the first begins aboard our ship where, in the role of the captain, we will be prey to a devastating dream in which our vessel is boarded by the forces of a ghost ship whose captain is an old acquaintance of ours , the Captain Crow. It will take a short time to wake up in bed and begin to take the first steps in the game and thus arrive at the Costa to the Crabs, where we will feel the experience of being able to move freely within the scenario. Continuing with the story we will reach in a few minutes the second part of the plot, where we will discover the presence of a portal on the island from which a Demon that will eat our soul, killing us. Finally, we will attend our burial and our resurrection thanks to a shaman, before we can start our adventure.

Risen 3: Titan Lords, as previously mentioned, it essentially recovers the game mechanics experienced in Risen 2: Dark Waters. The combat system is probably the only one to have been little modified in the foundations: as always within the franchise we will have the possibility to attack, defend, counterattack, dodge and use melee or ranged weapons as we prefer, interspersing the various actions of game with spells and much more. Although it seems easy to talk about it, the combat system will prove to be anything but simple: it will in fact be essential to study the attack pattern of enemies, understand when to dodge, parry and attack and, above all, learn to use this system well and be aware of your limits, understanding when it is time to escape from an impossible battle. Risen 3: Titan Lords it is punitive as we like it, however played in normal difficulty it could be quite simple for those who are quite versed in the genre.
Le game mechanics become deeper than ever: it will be possible to obtain the Gloria completing quests or killing enemies and using it to enhance some basic parameters, which can be increased differently through herbs and potions, which will also allow us to increase our various skills, whether they are related to combat, magic, the creation of weapons, spells or potions or to theft or burglary; these same skills will then be upgradeable through the learning of numerous skills, obtainable exclusively by learning them from a teacher by paying a sum in money or by reading the various books scattered around the game world. It is important to remember that the crafting will be available only and exclusively having learned, first, the skill that allows you to do so. You will also need to have a higher skill level to be able to craft higher quality items.
Within the game world of Risen 3: Titan Lords we will move mostly on foot, while we will take advantage of the ships available to move from one island to another and thus be able to continue our adventure. Exploration is really a key part of Risen since the first chapter, in fact it will be possible to obtain legendary items which will permanently increase our skills and discover hidden side quests otherwise unavailable.
Regarding the quests we have to raise a rather fussy question: do not feel embarrassed to admit that, at times, it is really tiring to carry out the secondary missions, and if your endurance is very low perhaps it would be better if you avoided them in Risen 3: Titan Lords, as they are present in a very massive and, we would dare to say, even exaggerated way!
The title, like the previous chapters, does not have any features that will allow multiplayer play, thus remaining a single-player experience.

Not quite cutting edge

Risen 3: Titan Lords takes everything, absolutely everything from Risen 2: Dark Waters, even the engine: after many years the heaviness of an obsolete graphic engine makes itself felt and the scarce internal quality of the title shows up, albeit with a marked improvement compared to Risen 2: Dark Waters. Risen 3: Titan Lords, however, it has a poor graphic level, thus failing to do justice to the worlds created by the guys from Piranha Bytes, which are meager from a quantitative point of view and not very lively as regards the color palette and the use of graphic effects also and not only as regards the vast amount of water present in the title. The polygonal size also leaves something to be desired, but it is really insignificant in the face of problems such as poor code optimization which, even on machines that are not really obsolete, could cause quite a few problems framerate near waterfalls or scenarios with a lot of smoke.
As in the previous chapters, Risen 3: Titan Lords however, it is capable of giving us a very precious gift colonna sonora full of musical masterpieces that will be able to adapt effectively to the themes covered by the scenarios that we are going to explore, allowing players to immerse themselves within the various islands where the graphic element will not be able to do so. The dubbing that will accompany many of the tedious dialogues in the game leaves something to be desired: we really like to find out more about the characters that are part of an RPG, but in Risen 3: Titan Lords all this does not happen and the dialogues, for the most part, seem to be put at random and simply to fill in the gaps before the reception of a much hoped for quest. 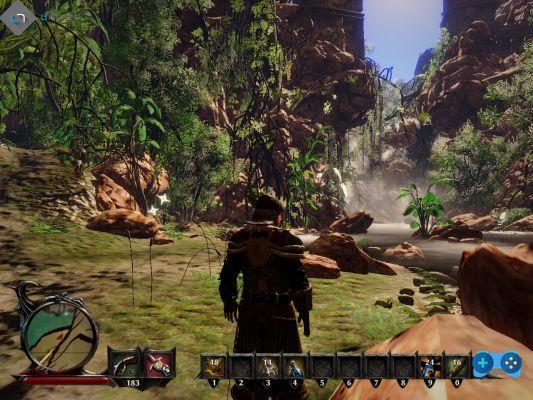 Risen 3: Titan Lords is a marked improvement over Risen 2: Dark Waters, but he still fails to reach the excellence of the first, unforgettable chapter. While remaining an excellent Action / RPG with a solid combat system and excellent game mechanics, it is impossible to ignore the presence of an obsolete and ineffective engine, unable to do justice to a mammoth job such as the use of an open-world world. It is also to take into account the lack of real innovations within the title: if you ever intend to play Risen 3: Titan Lords, in fact, you will believe more to play a "second episode" of Risen 2: Dark Watersrather than to a new chapter.

Do you want to complete all the achievements and trophies and know all the tricks, guides and secrets for your video games? SoulTricks.com is a group of video game fans who want to share the best tricks, secrets, guides and tips. We offer the best content to be a source of useful information, so here you can find guides, tricks, secrets and tips so you can enjoy your games to the fullest. Are you ready to get all the achievements of that game that you resist so much? Enter and enjoy your favorite video game to the fullest!
PlayStation Plus, April 2021 games revealed ❯

Ni No Kuni II: The Destiny of a Kingdom, our review