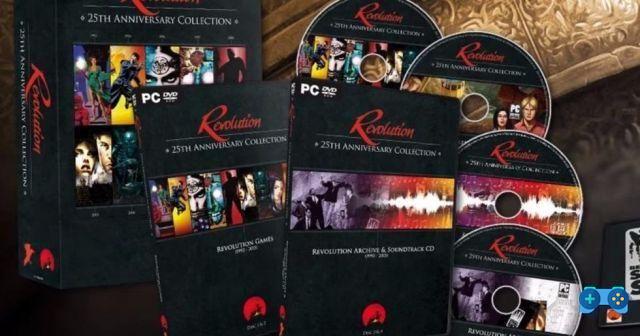 25 years of career in a single box.

The developer Revolution has reached a full 25 years of honorable career, creating some of the best graphic adventures of all time including, perhaps the best known and longest running, the saga of Broken sword. To celebrate this anniversary, from tomorrow it is possible to buy the Revolution: 39,99th Anniversary Collection at a price of € 25, a collection that undoubtedly long-time fans (like myself) should not miss.

Below we attach the official press release.

Milan, March 17th - Revolution, Europe's longest-running and successful adventure game development studio, is proud to announce that the Revolution: 25th Anniversary Collection, is available tomorrow, exclusively for PC, and distributed in Europe by Koch Media at a price of € 39,99.

“As a team, it is a privilege for us to be able to write adventure games for 25 years, thanks to the support of our loyal community. This edition brings together, for the first time, all the games we have written and numerous extras such as comics, posters, audio CDs, a USB stick with two hours of video on the history of Revolution with key team members and creative partners such as Dave Gibbons, Rolf Saxon and Barrington Pheloung. " Said Charles Cecil, Founder & CEO at Revolution.

Broken Sword 1 - Shadow of the Templars

Broken Sword 4 - the Angel of Death

Beneath a Steel Sky

Lure of the Temptress