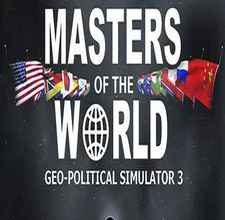 Masters of the World: Geopolitical Simulator 3 updates. The add-on "Modding Tool“, For the geopolitical simulation video game for PC that takes place in today's world, with millions of updated data.

With the "Modding Tool”Players will be able to create game scenarios, share them with other users and use other players' contexts.

Below I leave you to the official press release and at the bottom you can find some images.

“A few months ago, Eversim launched Masters of the World, Geopolitical Simulator 3, a geopolitical simulation video game for PC, which takes place in today's world, with thousands of up-to-date data.

Today Eversim is pleased to announce theadd-on modding tool, and allows players to create and use game (mod) contexts and scenarios, as well as share them with other users. Since its release, more than 90 mods have already been shared and downloaded.

The modding add-on is a large-scale creation tool and will allow you to:

An example of a scenario

In 2026, after a world war that devastated and contaminated the entire northern hemisphere, the player takes on the role of American president Jack Ohama, whose goal is to bring his country out of chaos and restore lost territories.

In this scenario, the modder destroyed cities and railway networks and created various epidemics in the war-affected territories.

The concept behind Geopolitical Simulator

In this geopolitical simulation of today's world, players can play as the head of state or government (president, king, prime minister, etc.) of a country they choose from the start. They can intervene in various areas: economic, social, political (internal and foreign), environmental, cultural, transport, etc. All the countries of the world are represented with their own variables and peculiar characteristics. The game includes phases of economic management, trade, warfare, construction, espionage, simulation and political manipulation “.

You can see the trailer at this link: