Only for this time, no objection!

Professor Layton vs Phoenix Wright: Ace Attorney will arrive on Nintendo 3DS and 2DS on March 28 2014. To announce it is the same Nintendo which has also released a new teaser trailer visible at the bottom of the article.

All information in the attached press release.

TWO PILLARS OF JUSTICE JOIN THEIR FORCES IN PROFESSOR LAYTON vs PHOENIX WRIGHT: ACE ATTORNEY ON NINTENDO 3DS and 2DS

In action from 28 March, the two gentlemen par excellence await you for an epic adventure that leads from London to the mysterious city of Labyrinthia

February 6, 2014 - Ladies and gentlemen of the jury, the universe of a legendary scholar and brilliant investigator is about to collide with that of a resolute lawyer on the side of justice: Professor Layton vs Phoenix Wright: Ace Attorney will arrive exclusively for the Nintendo 3DS family of systems il 28 March. In the heat of a trial, on the streets of London or in the mystical medieval city of Labyrinth, get ready to witness two genius minds grappling with all sorts of spells, sorceries and debates to settle!
For those unfamiliar with the Professor Layton or Ace Attorney series, this crossover adventure from the new pair combines the investigative and puzzle components of Layton with the hectic courtroom atmosphere of Phoenix Wright. Both characters are famous for their wit and skill in unearthing the truth, and in this joint adventure they will have to work together so as not to leave puzzles unsolved or processes unsolved.
In Professor Layton vs Phoenix Wright: Ace Attorney it all begins when, by sideways, both Professor Layton and Phoenix Wright - accompanied by their respective partners Luke Triton and Maya Fey - encounter a mysterious woman, Luna Minstrel, in London and come drawn into Labyrinth, a world ruled by the dark figure of the Narrator. The refined ruler of Labyrinth has the gift of foreseeing the future, and each of his prophecies becomes a story destined to come true. Having overcome the distrust of the inhabitants of Labyrinth towards the newcomers, Layton and Wright will get to know and, aware of their role, they must begin to examine the strange events of the city and prevent Luna from being condemned as a witch.
The two quintessential gentlemen will work in pairs: during the trials Phoenix Wright will be able to use Aid Coins - a key element in Professor Layton's titles - to narrow down options when presenting evidence, or provide helpful hints in cross-examination of witnesses. After all, during the Witch Trials of Labyrinth several witnesses to a crime can stand on the bench to testify! This means that Wright will have to be on the lookout to put pressure on witnesses who behave suspiciously during the testimony of others. And don't be surprised if you see Layton come forward to raise an objection, not only from the defense side, but also from the prosecution ...
For those who complete the main story, the Professor Layton vs Phoenix Wright: Ace Attorney Extras will offer exclusive visuals and the game's soundtrack. Throughout the adventure in London and the Labyrinth, be careful to collect as many Picarats as possible - the higher Picarats score at the end of the game, the more content will be unlocked. Once again, for fans completing the main story, free add-on content * can be gradually unlocked, fan treats such as twelve new mini episodes of the game, galleries with over sixty illustrations, and comments from the development team on how it was possible to merge. the two legendary gentlemen in this exceptional adventure.
Two pillars of justice come together on March 28 when Professor Layton vs Phoenix Wright: Ace Attorney lands across Europe in six different languages ​​for the Nintendo 3DS family of systems. Work your brains out to solve new puzzles as Professor Layton and Phoenix Wright, and watch the pair of justice defenders fight side by side in the courtroom to secure justice and unravel the riddle of the mysterious medieval city of Labyrinthia .
To check out what awaits you in Professor Layton vs Phoenix Wright: Ace Attorney, you can watch a new trailer for the game below. 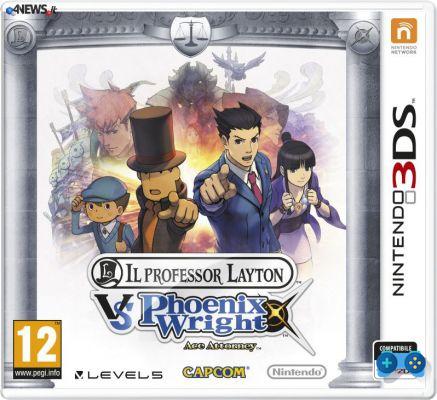 Do you want to complete all the achievements and trophies and know all the tricks, guides and secrets for your video games? SoulTricks.com is a group of video game fans who want to share the best tricks, secrets, guides and tips. We offer the best content to be a source of useful information, so here you can find guides, tricks, secrets and tips so you can enjoy your games to the fullest. Are you ready to get all the achievements of that game that you resist so much? Enter and enjoy your favorite video game to the fullest!
Resident Evil 3 Remake - Cheats and Bonuses Guide ❯