The Ancient Gods burst forcefully into the meta.

It's been more than a week since the Of the Ancient and standard format have made their compasa on the stage and on the boards of all fans of Hearthstone, and we can say with certainty that the change made by the developers was, in the opinion of many, extremely positive. This is both because it gave a breath of fresh air to a title that was now very boring the fans and to try to facilitate many newbies in the genre by eliminating several old cards. For any other information on the standard format and the new Hearthstone expansion, we refer you to our special at this link.

But let's move on to the analysis of the best decks by class that have come out with the introduction of the new expansion: 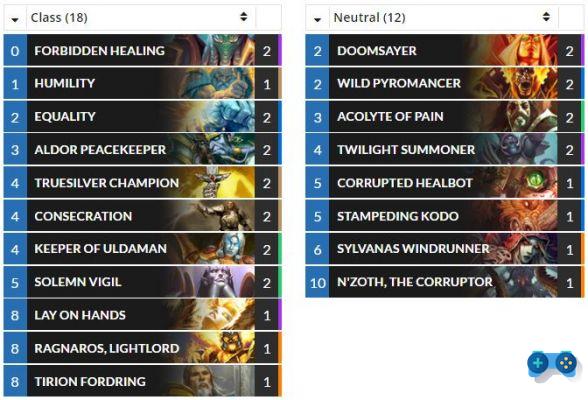 One of the first original decks to come out of the Whispers of the Old Gods expansion is N'Zoth Deathrattle control Paladin. It uses defensive minions with death rattle like Corrupted Healbot (Corrupted Healbot), Sylvanas Windrunner (Sylvanas Windrunner) e Tirion Fordring to maintain control of the board, and is able to completely turn the tide with N'Zoth, which when summoned brings forth a myriad of powerful death-rattle servants. The deck also includes powerful healing spells like the Healing Forbidden (Forbidden Healing) which can lead to full health towards the late game if we find ourselves in particular difficulty: acts as a pseudo Reno Jackson, but unlike the aforementioned legendary, you can have as many as two in a deck, so in some ways a control deck like this is more suitable. 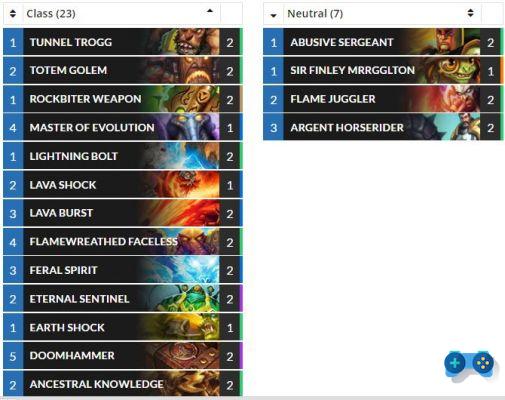 The Aggro Face Shaman is a deck that the meta has known well since the release of the League of Explorers, when the deck gained one of its most important and powerful cards which is precisely the fearsome Trogg tunnel (Trogg of the tunnels). Back then the deck was already strong enough, but now with the release of the new expansion it has gained even more powerful cards. Eternal Sentinel (Eternal Sentinel), Flamewreathed Faceless (Without Burning Face) e Master of Evolution (Evolution Master) have found a place on an already strong list. The Shaman has gone from being a weak laughter class to a versatile and strong class that can play both early game aggressive and midrange. 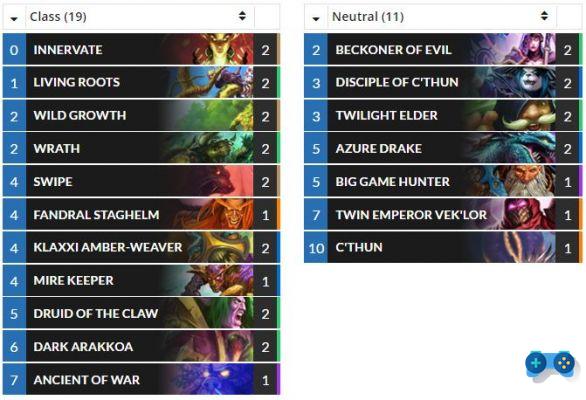 It was immediately evident that the Druid would be the strongest class in combination with C'Thun. He got some impressive cards that synergize with C'Thun like Klaxxi Amber Weaver (Amber weaver Klaxxi), Dark Arakkoa (Dark Arakkoa) e Mire Keeper (Keeper of the swamp) which in combination with the existing cards can lead us to a fast late game. The deck plays hard on the mana curve of the minions and quickly fills the board until it finally pulls out of the C'Thun deck, which will almost certainly have already been upgraded properly, to finally crush the opponent. The deck still needs some refinement, but it's pretty clear it's going to be a staple of the Druid class for the foreseeable future. 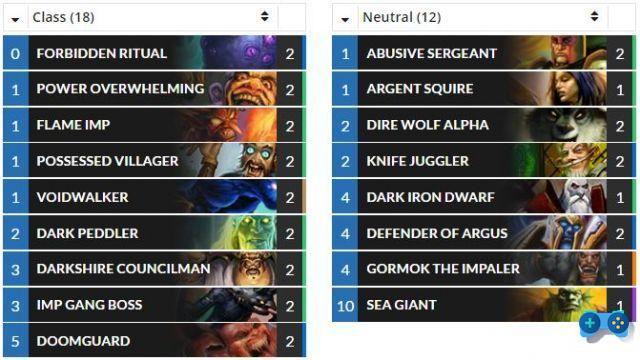 The Warlock Zoo deck has stood the test of time. Season after season there is always at least one zoo list in full destination. The deck has been Tier 1 multiple times, and is likely to continue this tradition in the early days of the standard format. This is not an extremely aggressive deck: it controls the board while literally eating away the opponent's health little by little. However, you can pull off extremely powerful and deadly combos with cards like Power Overwhelming (Overwhelming Power) e Doomguard (Guardian Demon). 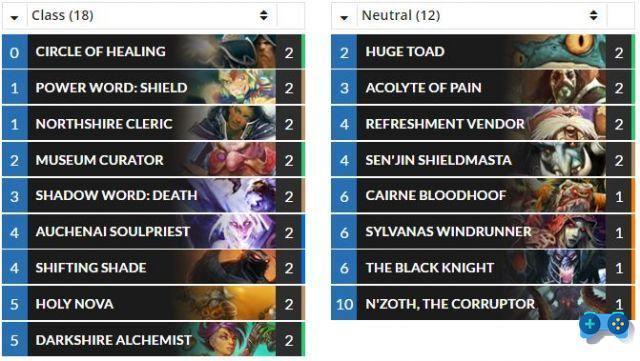 Of all, my favorite deck and class. This is a kind of midrange / control deck that wins through constant presence on board and then ends up with a full board thanks to death-rattle servants and N'Zoth. Don't be afraid to throw too many cards into play in the early game, it only benefits you and your presence on the board; you simply don't have to risk burning cards unnecessarily, otherwise you will be defeated very easily. Vendor Refreshment (Vendor of refreshments) e Sen'jin Shieldmasta (Warrior Sen'jin) are anti-aggro minions with good stats that can force warrior-aggro and druid decks to waste their heavy removal on them. The deck does its job well, keeping the player alive and paving the way for a strong late game. 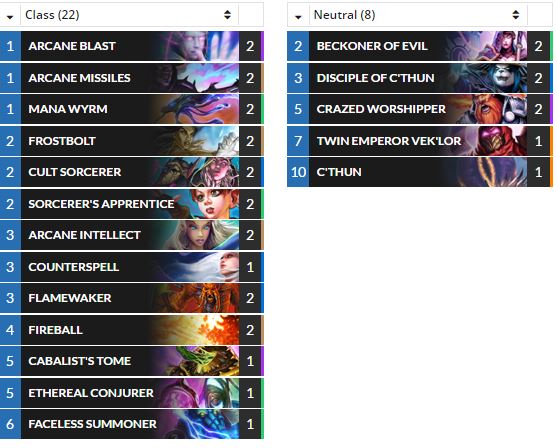 This is a very good deck against all aggro decks right now. Flamewalker and Arcane Blast (Arcane Burst) often guarantee easy cleaning of the board in early. C'Thun can easily be pushed to transform it into a 10/10 and to make this happen the main objective is to evoke the Cult Sorcerer (Witch of the cult), which in combination with the greatest number of spells will make your ancient god even stronger. C'Thun will get extremely strong if you get late game with this deck. 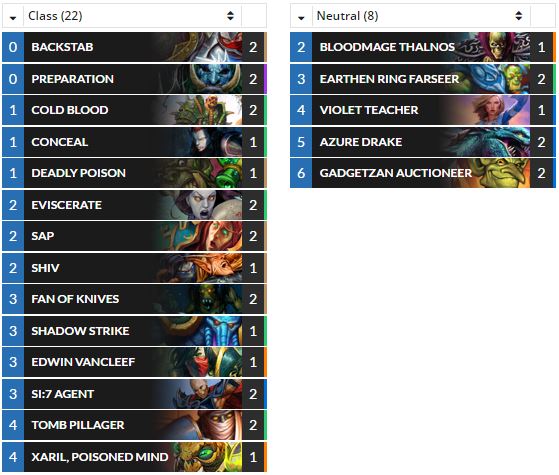 With the return of the Gadgetzan Auctioneer, the Miracle Rogue has a new life! Ryze, one of HS's most famous pros, has even completed his climb to the Legend rank with this version of the deck. Xaril, Poisoned Mind (Xaril Poisoned Mind) has proven to be a strong deck graft, generating cheap and usable spells to fill the board and deal damage. And the introduction of the Violet Teacher (Violet Teacher) is a nice addition that can be extremely dangerous in combo. 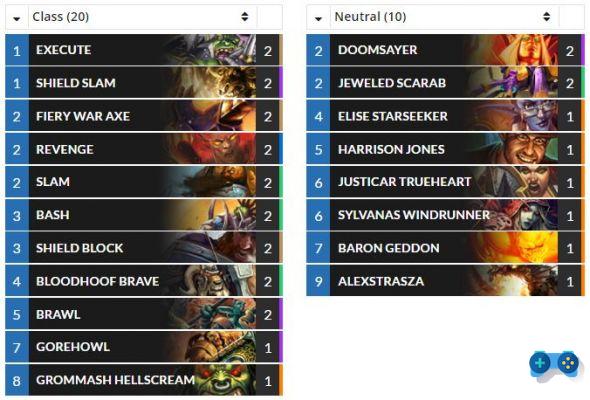 The most classic control warrior, always in meta and we always think it will be. His ability to beat the opponent with 'boredom' is unmatched thanks to the myriad of shields and the mighty minions capable of crushing any opponent's counteroffensive. The only downside to this deck is that it takes some time to start spinning, and as a result, it suffers a lot against extremely fast, mid-range decks.

Do you want to complete all the achievements and trophies and know all the tricks, guides and secrets for your video games? SoulTricks.com is a group of video game fans who want to share the best tricks, secrets, guides and tips. We offer the best content to be a source of useful information, so here you can find guides, tricks, secrets and tips so you can enjoy your games to the fullest. Are you ready to get all the achievements of that game that you resist so much? Enter and enjoy your favorite video game to the fullest!
Uncharted 4 Trophy Guide: A Thief's End ❯

Skyrim, the mods to turn it into Dark Souls

Add a comment from Hearthstone: Analysis of the top class decks