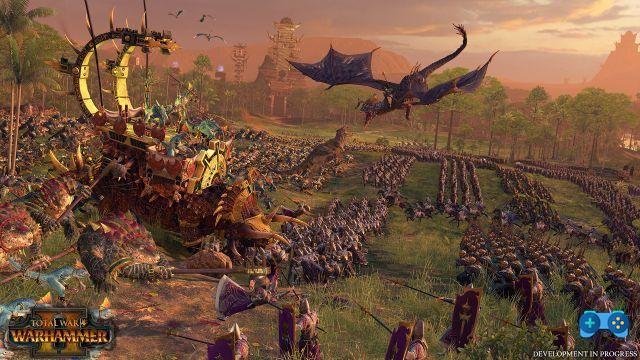 If you're as excited as hedgehogs about commanding a horde of ghostly knights, or shooting a goblin from a giant catapult, but sadly you're totally in the dark about what a Total War is, well, we've got the solution for you: in this short "initiation guide", we will give you six useful tips if you are new to the field. Enjoy it!

1 - Deployment of troops and positioning in battle

The troop deployment phase of each skirmish can be thought of as the "calm before the storm". Use this time to take a look at the layout of the terrain and deploy your troops in a starting formation, being careful to place units in tactical positions in order to maximize their potential.

Fast cavalry can take flanking positions and troops with the vanguard capability can also start from behind enemy lines for a surprise attack. Group your units to make them stronger against large armies and above all use the terrain to your advantage, but remember: even though hills and trees make for excellent cover, ranged units need a clear line of sight. After all, they can't hit what they can't see.


The Winds of Magic blow across the Old World of Total War: WARHAMMER, fueling the powerful mystical abilities of fearsome sorcerers and legendary heroes. Use powerful spells to thwart your enemy's most terrifying beasts or cause panic in the infantry ranks, or to completely devastate lower level fortifications. Always be aware of the placement of the Winds of Magic and their rapid changes, so that you can harness their power at the right moment. When used properly, the winds allow you to turn the tide of battle with a buff at the right time for your troops or with a well-placed vortex to devastate the enemy army.

In order to recruit, build and maintain a formidable army on the battlefield, your empire needs to be efficient in all respects. Take the time to study the campaign map and construct buildings in the colonies and provinces that will aid your war efforts.
Keep in mind that peace can also be profitable, so use your neighbors for business opportunities or to fill gaps in available resources. Of course, in Total War: WARHAMMER, peace is only ever fleeting and you must be continually ready to defend your borders or, if diplomacy fails, to take what is needed by force (personally, I often prefer the latter option).

4 - Take a break from battle every now and then

Often, no matter how well prepared you are, all battles can escalate faster than expected. In cases like these, strategic use of the pause button can give you a chance to breathe and reevaluate your options. Playing on Normal difficulty, orders can be given to troops both during battle and on pause, thus relying on a temporary halt to the fight that is able to give you time to regroup before planning your next moves. While in this mode, you are given the opportunity to closely observe the opposing troops to study some of the strongest units to discover their weaknesses and, of course, use them to your advantage.


5 - Maximize the potential of Lords and Heroes


The Lords and Heroes of Total War: WARHAMMER are certainly not precious generals who have forgotten what it means to fight on the battlefield, quite the opposite. These legendary units are some of the most powerful in the game and must be used at the right time.
Spend skill points to improve their skills and allow them to shoulder to shoulder with their troops, so the whole battalion will benefit: morale will rise and, depending on the skills, surrounding units can receive essential buffs. Similarly, pulling out of combat or killing the enemy Lord will make it much easier to dent the morale of opposing units, making it more likely that they will flee the battlefield soon in the presence of so much power.

6 - Learn to be excellent strategists

At times, cunning and strategy will be essential to overcome seemingly insurmountable difficulties. With a well-made trade agreement, you can even turn the tide of your empire. So maximum attention to what happens around your kingdom and to the agreements that are proposed to you, since nothing must be left to chance. Every now and then, however, the only solution is to take up the sword or ax, get on your steed and start cutting off some heads where someone has dared to oppose you!

Skyrim, the mods to turn it into Dark Souls