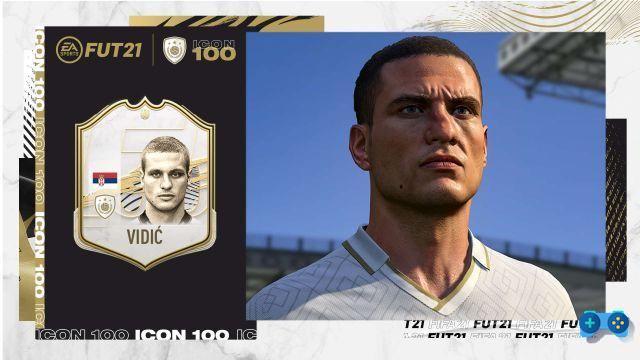 The universe of FIFA 21 it is very complicated to explain especially the competitive one. To triumph at certain levels it becomes necessary to know, as we have already understood in recent years, not only the game but also and above all the players.

In FIFA the weight of each individual player is considerable as well as the game system that becomes, year after year, more and more complex and more difficult to master and understand. It is no mystery that the situation has changed a lot in recent years, not exactly for the better. This happened in particular from the desire of EA Sports to always bring new cards to the market, which also indirectly send the previous ones "retired".

Keeping up with the times therefore requires not only a strong economic effort but also great dedication in staying informed. Above all it is necessary the will to always put one's ideas into play in favor of what is the so-called "goal". Today, more than ever, the word "meta" when it comes to FIFA 21 is frightening, as it often means giving up one's ideas. The writer has had to bend several times, especially this year, to the laws of the market, relying on those players with a sure performance at the expense of those of their liking, a practically mandatory step to be able to compete at certain levels and in certain competitions. .


The best offense is defense

As we said earlier, staying up to date on what the meta is and consequently on the most suitable players to use, is never easy. This also happens because, in this period, the much loved ones are active Icon Swap. The latter allow you to unlock in a "free" way some of the football legends, which could give a strong shake to your team.

Do you, like myself, have doubts about how to improve and how to prop up your team? Well, you are in the right place! We from Soultricks.com we have decided to start a new path, dedicated to the most important or most used players of FIFA 21 Ultimate Team. The intent is to try to support you in what is one of the most complicated steps of all: improving your team. What will follow, therefore, will be real mini reviews with a lot of final grade and partial votes. They will have the task of fostering both your understanding and our role in what we hope will become a constant and appreciated format. 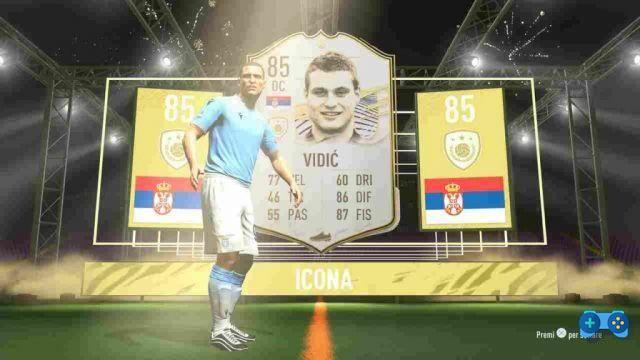 For this first episode we decided to start from one of the legends still unlockable through the aforementioned Icon Swap, a player we have tried for over 100 games and whose skills we are ready to confirm and above all to help you decide whether or not it is worth unlocking it, or whether to point in other directions.


We are talking about Nemanja Vidic, a former Manchester United star who is currently one of the best choices for the role of central defender. Of course, he also has his flaws, and we really want to help you understand in the best possible way what his pros and cons are, before deciding whether or not to give him a place on your team.

Knowing the gameplay of FIFA 21, and in general of the series, it is right to start from this very important parameter, which has always been one of the most incisive in the evaluation of a player, especially for a central defender. Being fast, especially with the super high pace of the game and with the large presence of super fast players in attack, consequently becomes one of the most important characteristics to take into consideration, and it is precisely in this aspect that the good Vidic, net of what it might seem, represents a good certainty. 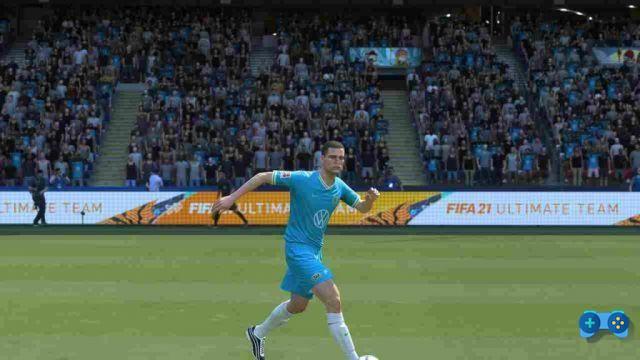 On paper, in fact, being over one meter and ninety meters tall and with a fixed speed value at altitude 77, however discreet for a DC, the Serbian giant would seem to be somewhat slow, but in reality it is not so, quite the contrary. On the shot, in fact, Vidic almost always manages to keep up even with the fastest attackers, making the most of a body type detail that gives it a speed and agility far superior to those shown on the card.


Of course, of course, we are not talking about a splinter. Especially in the final minutes, also thanks to the usual "super sub", this is felt in an increasingly evident way, precluding the player from the possibility of snatching an extra half point in our evaluation.

The best thing about the basic version of Vidic proven by us, it is definitely the defensive one. Of course, it may not seem like a complex thing to imagine, but in reality not all players are successful in the "tasks" for which they are intended. At least not in the same way. And, fortunately, Vidic does not betray in this respect in any way expectations, indeed. It turns out to be, without too many problems, one of the strongest players we have tried so far within FIFA 21.

Vidic is an incredibly attentive player in the marking phase, a defender who manages with great ease (and in a fairly automatic way) to keep the man, even in lateral slips or by holding down the button. L2 (to defend in a more manual way), almost never going out of time or committing a foul. 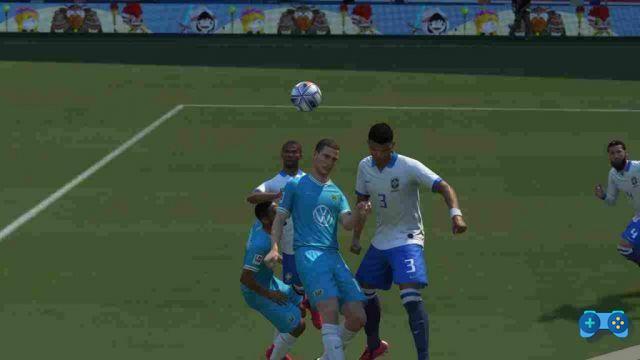 Precisely the timing in intervening, which clearly also passes through the hands of the player is one of the aspects that struck us most about this Vidic and, indirectly, gives great security to the entire defensive maneuver, making sure that the player can count on a team member who hardly becomes the protagonist of various blunders or "holes".

His defensive reading and ability to intercept opponent's actions are also excellent. In fact, Vidic knows how to place himself very well between the lines of the opponent's attack, very often managing to break the maneuver of the opponents with great skill and cleanliness, rarely missing his target.

Here, perhaps unexpectedly, the first most obvious shortcomings of the player arrive. In fact, the body, which should be one of the player's strengths in question is actually one of his most obvious weaknesses. For heaven's sake, Vidic is and remains a beautiful giant, rocky and difficult to jump, but too often it loses contrasts with even highly unsuspected players, nullifying most of those pros we have listed so far.

Of course, it is fair to point out that the problem of DC that tend to lose contrasts in a rather absurd way often happens and not only to the good Vidic. The undersigned, however, has taken too many goals because of this "small" detail, which has become, with the passing of the games, more and more continuous and evident. Fortunately though Vidic has a great resistance, a not insignificant detail for a control unit and which, in our opinion, is often mistakenly considered an accessory detail. Always remaining cool and moderately "active", Vidic manages to hold up well overall for the entire ninety minutes. Therefore, on the whole, he is a reliable player in this respect, but strangely "weak", in fact, in some circumstances. 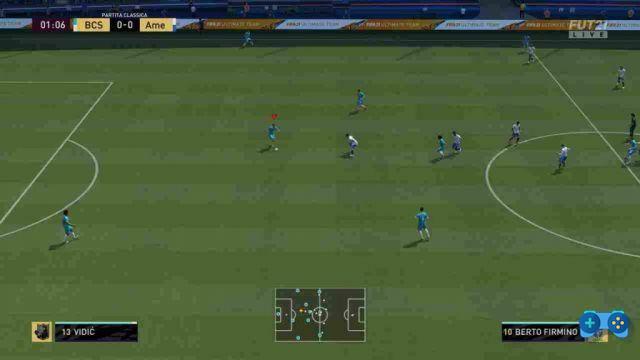 Our advice for trying to remedy this problem is to let it act automatically most of the time. In this way, in fact, some of the aforementioned problems can be avoided, although miracles should not be expected in this regard.

Final comment on elevation: Vidic sometimes seems to literally fly, both in attack and defense. It has very relative head accuracy though, so don't expect big things. You might be disappointed.

And here we come to the juicy note. Is it worth the purchase? The answer is probably yes, for two different reasons. The first is related to Swaps: Vidic is available in Icon Exchange challenges (until February). It is also obtainable by exchanging “only” seven tokens, and at that amount it is really given or almost. The same can be said if you decide to buy it with credits: okay, it is not given away and costs money 400 thousand credits, but in that price range, being an Icon, it really has no rivals.

Of course, in the future you could start having problems with a player who does not reach altitude 80 under "Speed", therefore you should think carefully about the purchase. With Swaps, however, he is undoubtedly one of those players to unlock in any case, because he can give you a big hand, especially at this stage of the game. 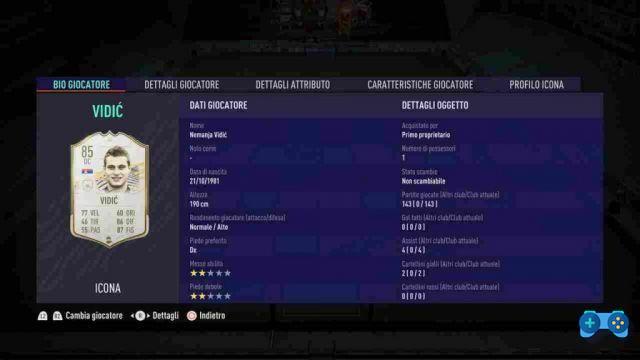 Nemanja Vidic is undoubtedly an excellent player in FIFA 21 Ultimate Team, very solid in defense and, considering his build, fairly agile and fast. Unfortunately, inexplicably, his mighty physical size exposes him to some blunders on contrasts. Of course, for the current phase of the game it is certainly a highly recommended and reliable card, especially if taken with Swaps. But beware: it could pay duty in the coming months, when faster and faster cards arrive on the market. Ah, remember to never (or not) go through the setup phase with him: you could quickly regret it.

add a comment of FIFA 21 - Players review: Nemanja Vidic (base)