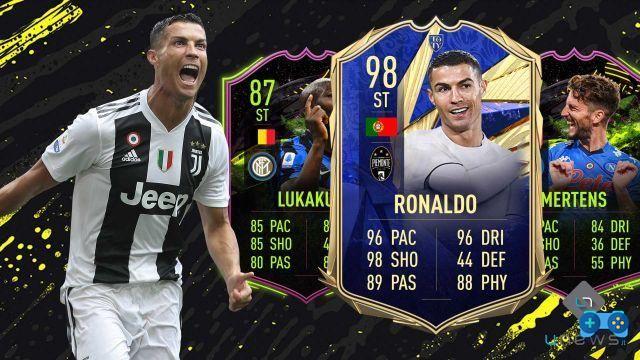 Here we are at the latest guide dedicated to the strongest Serie A players present on FIFA 21. Today, we dedicate our attention to the attackers, those players who with a simple twist are able to change the outcome of the matches and enhance the crowds of fans.

There are very few players who can claim the title of the strongest strikers in Serie A. Obviously, even in this case, the amount of credits available could make the difference. Rest assured, however, in this guide we will also take into account the price, offering you alternative solutions to the "usual suspects".

The young Argentine athlete under Juve (or Piemonte Calcio) is a real jewel in the offensive department, hence the nickname "La Joya". We are talking about a player who puts an impressive class on the field with extreme skill and a discreet nose for goals (despite the difficulties encountered in recent periods). The proposed version is very interesting, in fact, thanks to the statistics relating to speed (85) and dribbling (91) the 27-year-old Argentine could turn out to be a sort of Deus Ex Machina, able to solve every race thanks to his powerful left. 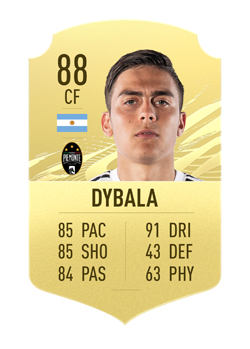 The Belgian playmaker is one of those players that everyone would like to have in the team, in fact, we are talking about a flexible and decidedly lethal athlete. The proposed version presents us with a card capable of excelling thanks to the statistics of speed (88) and shooting (84), all obviously without forgetting dribbling (84). In fact, thanks to the 4 stars dedicated to skill skills, the good "Ciro" Mertens is able to unhinge the most difficult defenses. Like the Argentine under Juve, the 33-year-old in Gattuso's service lacks physicality. To solve this problem, using a hawk understanding style could be the solution. 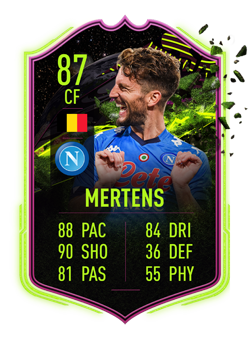 
The 32-year-old Armenian serving Fonseca is certainly a player of numerous qualities, on the other hand his work with the Red Devils shirt speaks for him. It is an athlete who accompanies his skill with the ball at his feet to an out of the ordinary tactical intelligence. The version that we propose, in addition to having a decidedly affordable cost, is equipped with excellent statistics, especially passing (87) and dribbling (87). On the other hand, we must not forget that we are talking about an ambidextrous player with a good passion for spinning shots. This last feature could be your trump card. In any case, if you want to improve his stats, especially related to physique (72), a hawk chemistry style could help you. 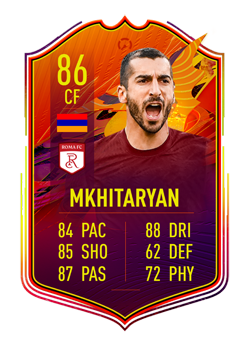 Enzo Iacchetti and Ezio Greggio would say “Is it him or isn't it him? Of course it's him ”. On the other hand, if you think of the strongest strikers in Serie A, the first name that will come to your mind is his. Let's talk about the five-time Ballon d'Or Cristiano Ronaldo. To talk about the phenomenal athlete born in Funchal, words would not be enough, in fact, he is a player who embodies all the characteristics of the ideal attacker, from finalization to speed, obviously without forgetting the ability to drunk the defenses with his dribbling. . The proposed version is the best ever, in fact, by purchasing it you will fix your offensive department for the duration of the title. The only problem with this phenomenal card is the price, in fact, if the wallet is one of your problems, even the Rare Gold card can be a great alternative. 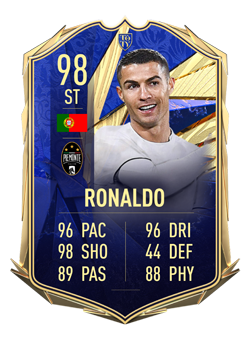 The national Ciro is certainly one of the strongest strikers in Serie A, and thanks to his statistics he can be part of any FUT Dream Team. In fact, we are talking about an athlete with an excellent shot (88) and a good speed (84), but unfortunately due to the goal present in FIFA 21 he is replaced by other athletes, who through the various special cards are able to outclass from any point of view the talented striker from Lazio. That said, if you're looking for a battering ram that can put the opponent's defense in trouble at any time and your credit wallet languishes, this might be the player for you. 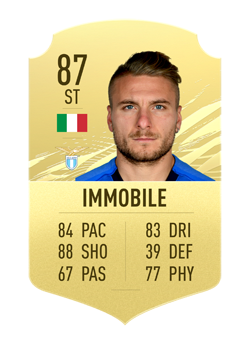 The Giant (not always) Good in Antonio Conte's service is certainly one of the strongest strikers in Serie A. In fact, he manages to mix (inexplicably) speed and physical power, obviously without forgetting an innate flair for goalscorer. The goal of FIFA 21, however, has penalized the player considerably, at least since he arrived in the Italian top flight, in fact, at excellent speed values ​​"on paper" there are no matches on the pitch. The version we propose definitely improves the player's situation, from a good speed (85) to an excellent reactivity in dribbling (95). In order to improve its performance in the field, we advise you to use the hunter understanding style, you will not regret it. 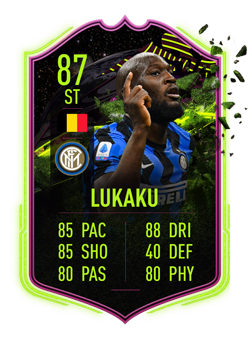 Although we would like to recommend the FUT Freeze version, even if in the role of left winger, this card is not to be thrown away, indeed, it could be an interesting investment for all those players who are not particularly rich in credits. The offensive statistics are decidedly balanced, so much so as to allow “El Toro” Martinez to enter this category by right. In addition, we advise you to upgrade it with the hunter understanding style, it will give you many satisfactions. 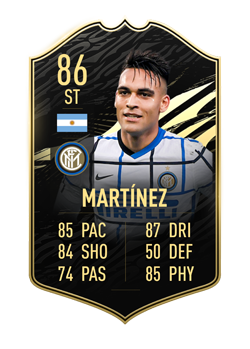 The 28-year-old from Madrid in the service of Andrea Pirlo is undoubtedly one of the most interesting players on the football scene. In fact, this guy is a real warrior on the pitch, it is difficult for him not to leave his mark in the match in some way. The proposed version is definitely the most interesting, as, as for Lautaro Martinez, we are talking about an extremely balanced card. In fact, thanks to his speed and shooting stats, this player is an excellent offensive battering ram. Among other things, thanks to the minimal cost, Morata could turn out to be an unexpected surprise. 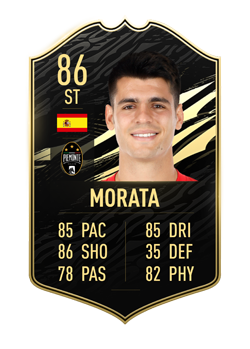 The Colombian of the Goddess has proved to be a phenomenal player over the years, so much so that he has climbed the hierarchies to become one of the strongest strikers in Serie A. The version proposed today could be defined by many as illegal, but as you well know, in FIFA 21 as in any other competition, the important thing is to win. The athlete's high speed (92) and intoxicating dribbling (88) are undoubtedly his secret weapons, obviously without forgetting the incredible shot (85). Trust us when we tell you that this card is able to compete with a few others and quickly become one of the players that you will not be able to do in mind. Unfortunately, it will be difficult to see a further upgrade, on the other hand facing the Bayern Munich battleship is not easy, but we remind you that the ball is round and anything can happen on the pitch. 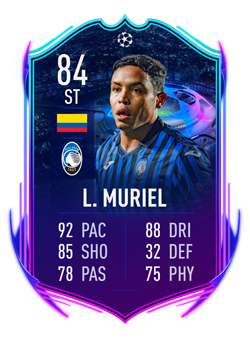 The Croatian striker serving Pioli has proved to be a surprise in recent seasons, and despite a series of ups and downs he continues to amaze with the Rossoneri Devils jersey. The version we propose is equipped with monstrous characteristics, from the speed worthy of a centometrist (92) to the physical (85), obviously without ever forgetting dribbling (85) and shooting (85). Maybe we will shoot it high, but this card has nothing to envy to others with a decidedly higher overall and connected to more famous athletes. In any case, if you want to build a low-cost attack, the 27-year-old AC Milan player is the perfect man for you. Furthermore, we remind you that in the event that AC Milan wins against the Red Star of Belgrade, the good Ante will receive an important update. 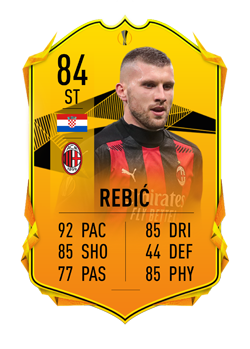 Here ends our guide dedicated to the strongest strikers of Serie A in FIFA 21, we hope that together with the others it has been of help to you and that the team born from our suggestions will give you the right satisfactions. Let us know in the comments if you share the proposed names and which players make up your Dream Team.

Do you want to complete all the achievements and trophies and know all the tricks, guides and secrets for your video games? SoulTricks.com is a group of video game fans who want to share the best tricks, secrets, guides and tips. We offer the best content to be a source of useful information, so here you can find guides, tricks, secrets and tips so you can enjoy your games to the fullest. Are you ready to get all the achievements of that game that you resist so much? Enter and enjoy your favorite video game to the fullest!
Outriders - Skill Guide ❯

The Evil Within, guide to trophies and achievements

Crash Bandicoot 4: It's About Time - How to get the Blue Gem

Add a comment from FIFA 21 - FUT Ultimate Team, the strongest strikers in Serie A