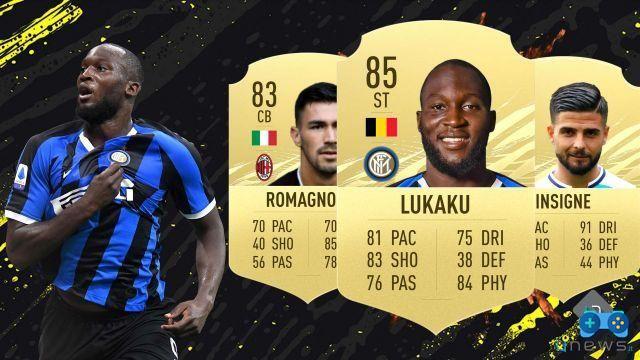 Despite being a league snubbed by many players of the FUT - FIFA Ultimate Team Serie A can reserve some pleasant surprises for those who know which players to buy. In fact, the Italian top flight is the perfect mix between promising youngsters and established professionals, so much so as to attract the interests of many gamers.

So, if you are looking to build the best Serie A line-up possible and you have a budget around 100K, you are in the right place. In fact, we have carefully chosen the best squad possible with this budget, to be precise 83.600 if you play on PS4 and 79.050 if you play from Xbox One. We remind you that the price of the players will undergo changes in the coming days, so beware of the market downturns.

Lorenzo Insigne (OVR 85) - 29250/27750: This “little” winger is the pride of Naples and the national team, it is impossible to deprive oneself of his offensive ability (dribbling, speed and passing). By choosing the good Lorenzo, you will be able to drive the most difficult defenses crazy.

Romelu Lukaku (OVR 85) - 10750/9400: The "Good Giant" Inter is a security in attack, despite the values ​​assigned by EA are lower than the player's ability, we are talking about the attacker that everyone would like in their Ultimate Team. Thanks to the values ​​related to speed, physique and shooting, this athlete will unhinge the most fierce defenses and will arrive on every ball, even those coming from corners.

Hirving Lozano (OVR 80) - 3400/3000: Here is another exponent of the team of centometrists, the Mexican from Napoli is not only an exceptional sprinter, but also a decent dribbler, thanks to the 4 * of Skill Ability. As soon as you get the chance, we advise you to invest in its version TOTW at the cost of 99000/87000 credits will guarantee you the fastest player in Serie A.

Alternative like CC: Radja Nainggolan. It costs much more than Milinkovic or Vidal (16750/12000), but we would like to recommend it because it is extremely balanced, see it as a Gullit (86) low cost carriers.

Alternative like ATT: Ciro Immobile. Also in this case we are talking about a more expensive player (26500/28000), but you will be delighted by his desire to score, so much so that it seems that the player controls himself independently.

By building such a team, you will be able to compete online at the highest levels and benefit from the rich prizes provided. Let us know in the comments if you too are already playing FIFA 21 and experiencing the joys (and sorrows) of FUT Ultimate Team.

Do you want to complete all the achievements and trophies and know all the tricks, guides and secrets for your video games? SoulTricks.com is a group of video game fans who want to share the best tricks, secrets, guides and tips. We offer the best content to be a source of useful information, so here you can find guides, tricks, secrets and tips so you can enjoy your games to the fullest. Are you ready to get all the achievements of that game that you resist so much? Enter and enjoy your favorite video game to the fullest!
Dragon Ball Z Shin Budokai 2, at the top of the PSP sales chart ❯

Cyberpunk 2077, how to set up Spanish dub on Steam

FIFA 21 - FUT Ultimate Team, the strongest outsiders in Serie A

FIFA 21 - FUT Ultimate Team, how to recognize a Walkout