If you have come this far you will surely have in your hands your beautiful copy of Far Cry 4 and you will have already launched into the hunt for Pagan Min, the "bizarre" king of Kyrat. You will have also read our review and you are wondering how to improve your situation on the icy Hymalayane peaks. So here are some tips that may be useful in your adventure, in this one of ours mini strategic guide.

Information is power: get radio stations

Kyrat is an inhospitable region not only for the despot who rules it with an iron fist, but also for the difficulty of movement and communication due to a vast mountain panorama and a thick fog that envelops the region. Essential to be able to continue and discover new portions of the map and new missions is to conquer as many radio towers possible; arm yourself with holy patience and launch yourself into this sort of platforming section of the game. The more portions of the map you discover, the more chances of finding important objects you will have. Unfortunately, it is not possible to capture all the radio towers from the beginning of the game, but immediately after the prologue start capturing as many as you can they will come in very useful later. 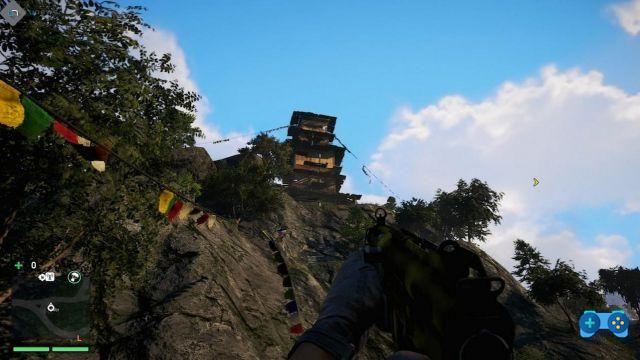 Do you like the smell of napalm in the morning? : use the small helicopters!

Despite the presence of hang gliders as in FC3, the biggest news from the point of view of air travel in FC 4 is the small single-seat helicopter that will allow us to move far and wide throughout Kyrat in a rather simple and fast way. . If you manage to get one at the beginning of the game, you can immediately head to the southern part of the map and conquer all the radio towers present, in about 15-30 minutes. The same helicopter in combination with a missile launcher will be essential to quickly conquer the enemy outposts. Also remember that in the cooperative it will be possible to have a teammate get on your vehicle, making your shovel vehicle even more lethal. 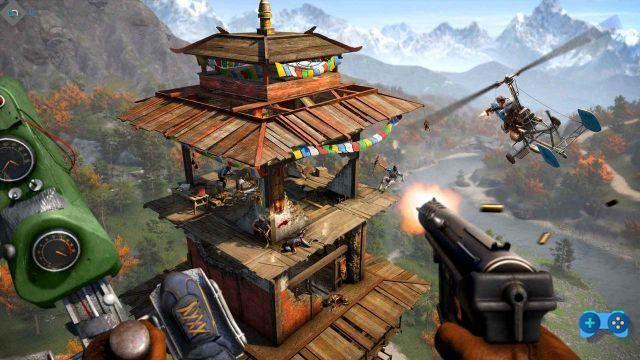 Although paradoxically you will find yourself feeling more pity for the poor animals, unrelated to your war, than for the troops of the bloodthirsty despot Pagan Min, constantly devote yourself to hunting. Thanks to hunting you can empower Ajay  obtaining the materials needed to upgrade your arsenal. This task will be easier for you if you have followed point 2 dedicated to exploring the map. 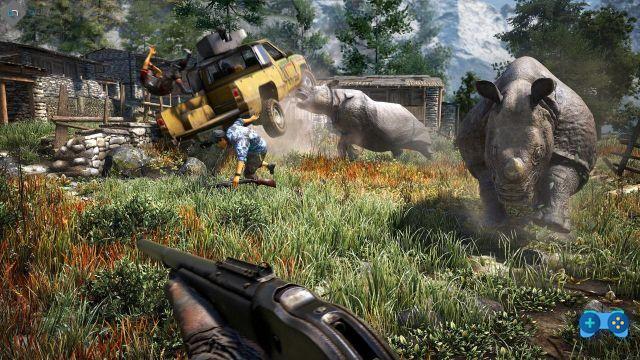 Bows and syringes are better than the shotgun.

Killing an animal with a bow will allow you to get two units of skin from the animal you just killed, so try to always use it during your hunting trips; also if you have problems identifying the animals to hunt, use the syringes so that you can temporarily see the traces of the animals and thus be able to locate them more easily. Also do you want to put the satisfaction of hunting with a bow?


If you intend to hunt for rhinos or elephants, however, it is always best to have a little more firepower; face them therefore with everything you have but also pay attention to dogs and tigers, in case you are not experts of the bow, also in these cases use firearms.

Don't blow up the animals (apart from those damned eagles) if you want to get something out of it. Yes, there is someone who goes hunting with hand grenades and explosives: MURDERERS! 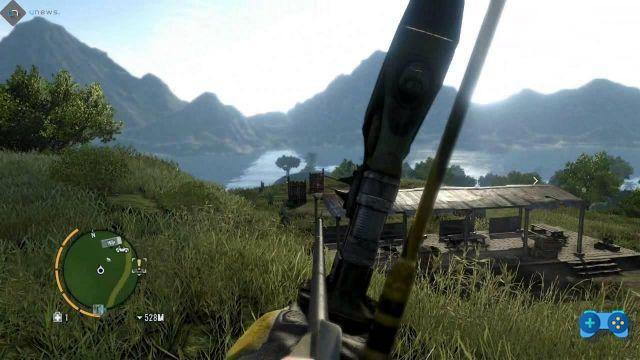 Stay away from bees

You know the killer bees that help the beautiful Katniss in The Hunger Games?, Here those of the Kyrat are worse. Avoid them !, or use them as our heroine to take out groups of enemies in one shot (remember to hit them from a distance).

Getting the maximum level of the holster will be essential and will allow us to carry up to 4 weapons with us, saving us a lot of long and tedious trips. Same goes for your health bar to increase your chances of survival in the wild Kyrat think about improving this.

In this sense, the upgrade that allows you to get 2 units from the collection of plants is fundamental. With it, the collection of medicinal plants in this way will yield double the materials and also the syringes for the treatment will be automatically created by collecting the green colored herbs.

These are the items we recommend to improve as soon as possible:

Other pieces of equipment such as bags of explosives are certainly useful, but they concern a specific use in certain situations, so they can be improved later.

Play the campaign up to "A Key to the North"

This is the mission that will unlock most of the northern map of Kyrat, which contains two of the game's four fortresses. They are also the largest and most complicated to deal with. By completing this mission, however, you will also unlock important improvements in health.

Complete all of Longinus' missions

In addition to being one of the most mission-offering characters in the game, Longinus is also a weapons dealer. Complete all his missions and you will unlock really interesting items (no spoiler, sorry)

Complete the first act to unlock the co-op

To unlock the co-op, complete the first act, which requires a maximum of one hour of play.
Remember that co-op progress doesn't work the way loot and experience progress does. This means that if you participate in a match, the progress regarding the radio towers, outposts and fortresses that you have captured in your friend's session will not be updated. Therefore, alternate each time you play cooperatively.

Races may not be the highlight of a game like Far Cry, but complete at least one to unlock two major takedowns. By winning a race, you will unlock vehicles takedown and, later, heavy vehicle takedowns, which will come in very handy during your adventure.

Capturing two outposts without alarming anyone will allow you to unlock the “Soft Landing” and “Non-stop” abilities which, respectively, will reduce your fall damage and allow you to run non-stop.

How to unlock the best skills in no time.

To get Ajay's best high-level skills as quickly as possible, complete the following missions as soon as they show up:

- At least one bomb defusing mission to take down grenades

- Two hostage rescue missions to unlock "Deep Breath", which increases the time you can hold your breath, useful for both diving and aiming with precision with your sniper rifle

- An escort mission for "Improvised Infirmary", which allows you to heal yourself without two-rod syringes instead of one

If you are going to an area of ​​Kyrat where you intend to take out some enemies, make sure you have the situation under control by observing the place with your camera, which is very useful for two reasons: the first is that it has a more powerful zoom than any other. sniper rifle; the second is that you will be able to report enemies and see them even if they are out of sight.

Unlock the wingsuit and sticky bombs

Sticky grenades, sticky C4, sticky mines and wingsuit are four important elements in Far Cry 4. Although the wingsuit will be given to you at some point in the game, you can still buy it first directly in the shop along with the other explosives.

Use the techniques of the best Jihadists

To make a vehicle a booby trap for enemies, simply place the explosive bombs on it, put the vehicle in a spot where it can slide down a hill, for example, and release the brakes when you are sure of your target. Upon reaching it, just detonate the explosives to eliminate enemies in style.

The Kyrat also hides several special objects scattered throughout the map of mainly four types: masks, propaganda posters, hand wheel and secret locations. Finding them is not essential, but if you want to quickly increase your experience to get all of Ajay's abilities they are one of the best ways.

- Prayer with the hand wheel, is good here, is good here. Karma events appear quite often during games, so don't worry if you miss one.

We hope you enjoyed this guide, if you help us improve it by commenting on your findings, sharing it or subscribing to our Facebook page.

Do you want to complete all the achievements and trophies and know all the tricks, guides and secrets for your video games? SoulTricks.com is a group of video game fans who want to share the best tricks, secrets, guides and tips. We offer the best content to be a source of useful information, so here you can find guides, tricks, secrets and tips so you can enjoy your games to the fullest. Are you ready to get all the achievements of that game that you resist so much? Enter and enjoy your favorite video game to the fullest!
Infinity remembers Kurt Cobain with the documentary Cobain: Montage of Heck ❯

Spyro Reignited Trilogy, here is the list of cheat codes

Dishonored 2, where to find all the runes in the game