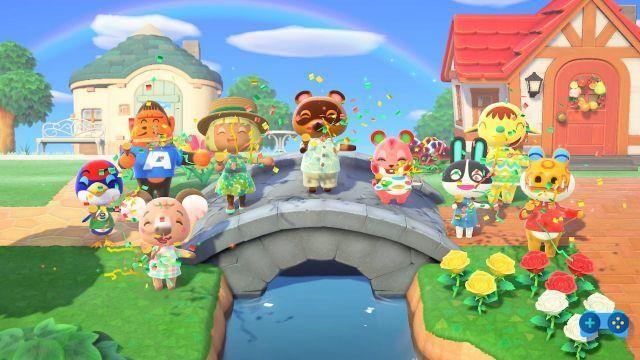 More than 7 million copies sold across Europe since its launch on March 20, 2020

One year after its launch on Nintendo Switch, Animal Crossing: New Horizons has become the fastest-selling Nintendo game in Europe.

Since its release on March 20, 2020, over 7 million copies of the game have been sold across the continent *. More than a third of the more than 20 million Nintendo Switch owners in Europe have started their vacation on a desert island in Animal Crossing: New Horizons, and the number of players continues to increase.

“We are truly grateful that Animal Crossing: New Horizons has been welcomed by so many players across Europe,” said Stephan Bole, president of Nintendo of Europe. "Animal Crossing has been a popular franchise in Europe for some time now and its continued growth is due to the love of our fans for this unique series."

In Animal Crossing: New Horizons for Nintendo Switch, players begin a new life on a desert island, living among resident animals, collecting materials to craft tools and furniture, and having a carefree life. Over time, players can transform an overgrown island into a thriving community by shaping the landscape with streams and waterfalls, placing objects and pieces of furniture outside to create idyllic places. As the seasons change, the island changes too: you can catch different species of insects and fish depending on the time of year, look for mushrooms, create snowmen, collect flowers and much more. Unique seasonal events ** will also take place, including special visitors and other activities to liven up the atmosphere. Friends near or far can visit each other's islands via online play *** and exchange gifts and messages while playing.

Since the game's launch last year, a number of free updates have added a variety of content, including timed events, visiting vendors, and the chance to dive into the ocean. The most recent updates have added themed clothing and furniture to celebrate the 35th anniversary of Super Mario Bros., as well as new characters in collaboration with Sanrio, obtainable by scanning the amiibo cards that will be launched in Europe next week. Software updates will also continue in the second year of the title.


Players who want to show off their islands will soon have a new way to do it, with the Animal Crossing: New Horizons Island Tour Creator web service ****, launching on March 24th. By uploading screenshots or video clips of their island captured through their Nintendo Switch console, players can create a poster or trailer to share scenic views of the island and top attractions with the world.

One year after its launch on Nintendo Switch, Animal Crossing: New Horizons has become the fastest-selling Nintendo game in Europe, with over 7 million copies across the continent.

Do you want to complete all the achievements and trophies and know all the tricks, guides and secrets for your video games? SoulTricks.com is a group of video game fans who want to share the best tricks, secrets, guides and tips. We offer the best content to be a source of useful information, so here you can find guides, tricks, secrets and tips so you can enjoy your games to the fullest. Are you ready to get all the achievements of that game that you resist so much? Enter and enjoy your favorite video game to the fullest!
Persona 5 Strikers - Beginner's Guide: Tips and Tricks ❯

Nintendo Direct: all the announcements and news

Add a comment from Animal Crossing: New Horizons is the fastest-selling Nintendo game in Europe