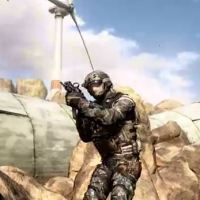 The name seems appropriate given the content it proposes. The development team has indeed introduced some interesting features that make battle theaters always unpredictable. Suffice it to see the Hydro map, in which if you are not careful, you are hit by a river of water in the middle of the battle.

Get your first look at Revolution, the first DLC Map Pack available for Call of Duty: Black Ops 2. One of the most diverse and robust DLCs offered in Call of Duty history, Revolution includes four new Multiplayer maps named Hydro, Grind, Downhill, The Mirage,, a new Zombies map called Die Rise, an exclusive Multiplayer weapon named Peacekeeper, and a new Zombies game mode where you play the undead!

The Revolution DLC Map Pack arrives exclusively on Xbox LIVE on January 29, 2013, to follow for other platforms. Season Pass owners can purchase the remaining three Map Pack DLCs at a discounted price.

Revolution is the first of four epic DLCs that will be launched for Call of Duty: Black Ops II

The innovative pack includes four new multiplayer maps, a new Zombie map in Co-operative mode and a new Zombie mode that will allow fans to truly play as a Zombie plus, for the first time, a Bonus Multiplayer Weapon. .

Fans will be able to buy Revolution as a Single Pack or as part of the Call of Duty: Black Ops II at an advantageous price

Legnano, MI - January 8, 2013 - Activision Publishing, Inc., a subsidiary owned by Activision Blizzard (Nasdaq: ATVI), and the award-winning development studio Treyarch kick off 2013 with the announcement of Revolution, the first massive Downloadable Map Pack (DLC) of the game of records, Call of Duty®: Black Ops II. Since the release of Call of Duty: Black Ops II, millions of fans have been captivated by the ambitious fiction set in the game's near future, have given their best in non-stop multiplayer action by accomplishing over 427 million hours of futuristic guerrilla warfare, and have survived hordes of Zombies. Out next January 29th in exclusive preview on Xbox LIVE® for Xbox 360® with the other versions to follow, Revolution offers an unprecedented level of content, and for the first time in Call of Duty® DLC history, a new bonus multiplayer weapon.


"With Black ops ii, the team put themselves on the line by challenging all beliefs about what fans should have expected from Call of Duty, and Revolution is no exception, ”said Mark Lamia, Treyarch's Studio Head. “Starting with the incredible amount of content that Revolution offers: four distinct multiplayer maps, a new Zombie map, a new Zombie mode, and a new bonus weapon. But quantity is just the beginning - it's the variety of gameplay options that they render Revolution different and that make this Pack the most incredible offer ever and an unmissable gaming experience for Call of Duty fans. "

Revolution takes players to new and unexpected locations around the world. "Downhill" is set in the region of the French Alps where players will be called to fight between snow-covered ski slopes and mountain huts, being careful to avoid the danger of the gondola in constant operation. Water is the natural obstacle that players will find in “Hydro”: while competing for domination of a hydroelectric dam in Pakistan, they will have to pay close attention to the facility's dangerous man-made canals. “Mirage” plunges players into a battle in the sand and sandstorm-lashed dunes of a luxury resort in the Gobi desert; a map characterized by close and long-range combat to please all styles of play. Finally, "Grind" transports players to the historic cradle of skateboarding, the famous Venice Beach in California, where they will fight between the ramps and half-pipes of this epic skate park in a multiplayer map characterized by a unique curved architecture. its kind that will force players to adapt and learn new ways to find coverage. Each map in Revolution offers a new battle scenario and tactics.


Revolution also offers a deadly bonus multiplayer weapon, the "Peacekeeper." This powerful SMG, accompanied by its set of challenges to earn XP, is available to all fans of Call of Duty: Black Ops II that they will buy Revolution.

Furthermore, Revolution takes fans to the Far East, where they will try to survive a zombie infestation within a series of collapsed skyscrapers that stand out from the ruins of a devastated Chinese metropolis. In this new and original Zombie map, “Die Rise,” players will wield powerful, customizable weapons and can combine and craft deadly tools to battle a tireless army of the undead. Treyarch has also added a new game mode, “Turned,” whereby players can finally take on the role of a zombie!

With the imminent arrival of Call of Duty: Black Ops II Revolution, fans who have not yet done so should register - for free - a  Call of Duty® Elite to be able to keep track of their multiplayer performance thanks to the rich statistics system of the service, to take part in incredible Clan Challenges and Operations and watch the new videos of the Call of Duty Elite TV that offer insights and useful tips to improve your multiplayer gaming skills. To register or for more information, visit: http://www.callofduty.com/Elite.

Do you want to complete all the achievements and trophies and know all the tricks, guides and secrets for your video games? SoulTricks.com is a group of video game fans who want to share the best tricks, secrets, guides and tips. We offer the best content to be a source of useful information, so here you can find guides, tricks, secrets and tips so you can enjoy your games to the fullest. Are you ready to get all the achievements of that game that you resist so much? Enter and enjoy your favorite video game to the fullest!
Red Dead Online, the best combinations of Skill Cards ❯

Dragon Ball FighterZ, Bardock and Broly are on the way

Kingdom Hearts 3 Re: Mind, everything you need to know

Add a comment from Call of Duty: Black Ops 2, trailer and details of the DLC Map Pack Revolution