Shadow of the Colossus collectibles and secrets guide

The branded guides continue Soultricks dedicated to the remake of Shadow of the Colossus. After showing you how to defeat the various giants (here part 1 & here part 2) in this new guide we will talk about the secrets and collectibles present in the game, that is the lizards, the fruits, the sanctuaries and the real novelty of this remake: the gold coins.

If for the lizards the fruits and the sanctuaries the speech is simple, since these are the same as the original version, finding them will not prove complicated at all. It will be anything but easy to find the gold coins.

But what exactly are these golden coins? At the moment there is not much information about it but various theories about their function have immediately sprung up on the net.

These particular objects to be collected will be scattered throughout the game map and placed in the most difficult and unthinkable places. Although the coins are well hidden it will be possible to recognize them and find them thanks to a faint sound emitted in their vicinity and the glow that surrounds them.


Currently the exact number of existing coins and their function is still unknown to us but, if you are interested in completing 100% Shadow of the Colossus we have the right solution for you here.

But let's go in order and see how to find the first collectibles.

As already mentioned, lizards are one of the collectible classics already present in the original Shadow of the Colossus released in the PlayStation 2 era. The developers who worked on this remake simply repurposed the 77 lizards in the title, leaving them in their original position.

To help you in your search we leave you a handy map below that you can use to view the areas where 77 lizards are located.

Some locations may vary slightly; it is therefore a good idea to look around for the marked areas to be sure to find them. 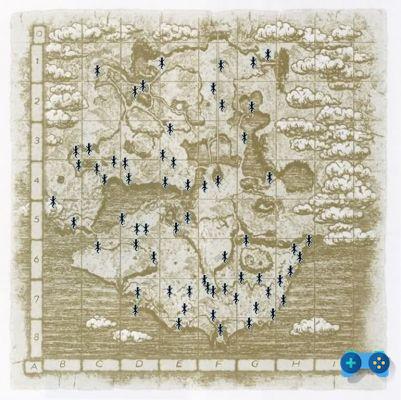 The fruits are collectibles also present in the original chapter of Shadow of the Colossus and re-proposed now in this remake in a similar way to what has already been done with the lizards. There are a total of 128 and finding them all will not be easy.

By collecting the fruits you can increase your life, thus allowing you to be able to withstand the blows of the colossi more.


The fruits will also be marked on the map, but keep in mind that each plant can also have 4/5 fruits. Even the shapes and the type of fruit can change, but the important thing is always to pay particular attention to the branches of the trees.

Keep in mind, however, that the map only indicates the position of the tree and not the number of fruits since each plant has several hidden among its branches.

Furthermore, also pay attention to the fruits present in the Secret Garden that are not marked on the map, but that, in total, there are 48.

To help you in your search, here is a handy map: 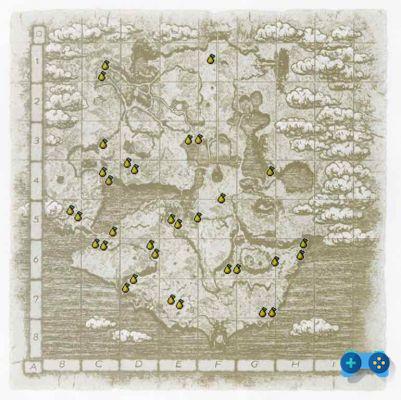 In the original title, shrines allowed you to save your progress. In this remake the function was removed and these altars ended up becoming real collectibles to be found.

In addition to their "iconic" presence, praying in these shrines will allow the player to fully restore their health.

In total there are 25 and finding them all should not prove to be an impossible task. To help you in your search, however, we leave you a handy map below that marks the location of the various sanctuaries in a general way. 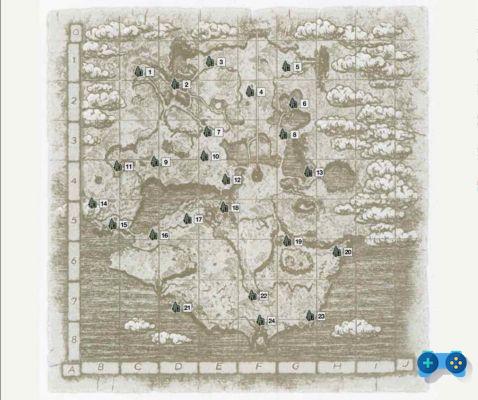 The only novelty introduced by Bluepoint Game are the coins. As already mentioned at the beginning of the guide, their exact number or usefulness is not yet officially known but if you want to start taking some we still have some advice that is right for you.


According to an enigmatic sentence that appeared once the game ended in the credits (thanks to the nomadic giant and its 79 steps towards enlightenment) it is thought that the coins present in the titles are 79 and that these, once collected all, they could even lead to a clash with a new colossus (the 17th, precisely called the nomadic colossus).

Unfortunately we do not know how much truth there is in all this, but it is this aura of mystery that lies behind these coins that pushes us to go ahead and look for them all.

The mystery behind the 79 gold coins has been revealed. By collecting them, all players will be able to unlock a new special weapon, the sword of Dormin.

But how and where can we find them exactly? Unfortunately, there are currently no precise maps but, rather, we will have to give all our energy and explore, in the old way, from top to bottom the wonderful universe of Shadow of the Colossus.

As already mentioned at the beginning of the guide, the coins will be well hidden but, fortunately, their presence will be signaled to us thanks to a faint sound and the glow that surrounds them.

To find them all you will need a lot of vigor, so our advice is to start looking once you have completed the game at least once and have sufficiently strengthened your stamina.

Thanks to the following image published on Reddit by the user Riku7kun it is possible to keep track of the position of 57 coins. 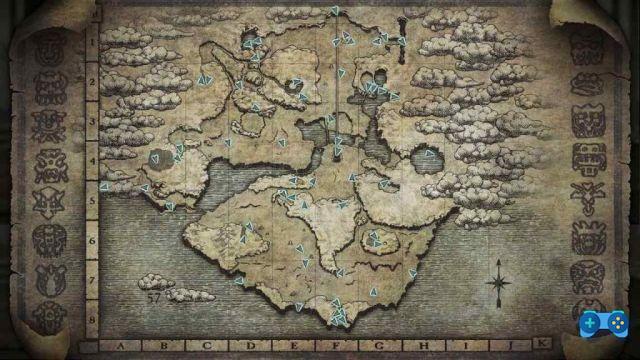 Finally we leave you some handy videos to facilitate the hunt for each collectible present in Shadow of the Colossus:

For the videos we thank PS4Trophies

In this remake of Shadow of the Colossus we find the exact same extra modes of the original title, as well as some minor but still interesting additions. Let's see them together in more detail:

The characteristics of the Time Attack mode

As already mentioned, once you have completed the main adventure you will unlock the Time Attack mode which will allow you to face the various giants in real races against time. This mode comes in two variants, one set to normal difficulty while the second to difficult.

Completing both challenges will not be easy at all but, if you succeed, you will be rewarded with very useful special items to use in the main mode of Shadow of the Colossus. To start the clashes, all you have to do is "pray" in front of the idols of the giants present in the Temple of Adoration.

Let's see below the times to beat to overcome the various timed challenges both on normal and hard difficulty:

Looking at the table you immediately realize how the developers in this remake of Shadow of the Colossus they wanted to make things even more difficult, with times that, in some cases, have been significantly lowered compared to the original version.

By overcoming the timed challenges you will be rewarded with some very useful items. In total there will be 16 and you will get one every time you overcome the challenges of two giants.

Once you have overcome the challenges and defeated the creatures, you just have to go to the pool at the back of the Temple of Worship to get the object conquered.

Below is the table with all the rewards divided by difficulty:

And now let's see what the objects you have laboriously obtained are actually used for.

Received after beating Limited Time Challenges in Normal Mode for two behemoths. You can use this special arrow to distract the behemoths by forcing them to turn their backs on you. Perfect to allow you to regain strength or to get closer to the weak points of the giants.

Received after clearing Time Trials in Normal Mode for four behemoths. The Cloak of Strength will increase the attack power of the sword in your possession, the Ancient Sword.

Received after beating Time Trials in Normal Mode for eight behemoths. The Lizard Finder Stone will make it easier for you to find the 77 Silver-Tailed Lizards.

This object will notify you of the presence or absence of lizards in the vicinity through an icon that will appear on the map.

You will receive this item after completing timed challenges in normal mode for ten giants. You will simply unlock a new color to customize your Agro trust.

Received after completing Time Trials in Normal Mode for fourteen behemoths. Wearing the Cloak of Deception will allow you to be invisible to the eyes of behemoths. This item cannot be used in conjunction with the Cloak of Strength.

The Blinding Arrow will also prove useful in other situations, for example, allowing you to reach previously unreachable areas.

Finally, once you have cleared all sixteen timed challenges on a normal level you will get a new coloration (Brown) for Agro.

Awarded after beating Time Trial Challenges on Hard Mode for two behemoths. The Thunder harpoon can be used like normal arrows, with the difference that the harpoon will do more damage and can sometimes interrupt an impending attack from the behemoths.

Sword of the Sun:

Received after beating Time Trial Challenges on Hard for four behemoths. The Sword of the Sun will show you the way forward even in the darkest areas of the game.

Awarded after beating Time Trial Challenges on Hard Mode for six behemoths. Much like the Lizard Finder Stone, the Fruit Map will show you the presence of fruit in the immediate vicinity on the map.

Cloak of the Shaman:

Awarded after beating Time Trial Challenges on Hard Mode for eight behemoths. The Shaman's Cloak will decrease the damage taken by behemoths.

Awarded after beating Time Trials on Hard Mode for ten behemoths. The Cursed Skin for Wander will allow you to change your character's look. This change will not involve any bonus / malus but will be purely aesthetic.

Mask of the Shaman:

Received after beating Time Trial Challenges on Hard Mode for twelve behemoths. The Mask of the Shaman will allow you to take less damage from the giants. Use it together with the Shaman's Cloak to withstand even more enemy hits.

Awarded after beating Time Trials on Hard Mode for fourteen behemoths. The Web of Despair will basically function like a parachute, effectively eliminating fall damage. You can use gliding to your advantage to reach areas that were previously unreachable. It is also possible to use the Web of Despair in conjunction with the Shaman's Cloak.

Sword of the Queen:

Received after beating Time Trial Challenges on Hard Mode for sixteen behemoths. The Sword of the Queen is the most powerful weapon in the game, capable of destroying any weakness of the behemoths in one fell swoop. As the name suggests, this is the same sword that Ico used in the eponymous title to defeat the Queen.

To help you, here is a handy video guide to overcome in the best way every time challenge on difficult difficulty:

Thanks to Shirrako for this great video.

You may also be interested in our other guides dedicated to Shadow of the Colossus:

F1 2018, Nico Hülkenberg takes us for a lap on the Hockenheimring circuit ❯

Parasite Eve: The 3rd Birthday, Square-Enix reveals how to get Lightning's outfit

The Last of Us Part 2 - Trophy Guide