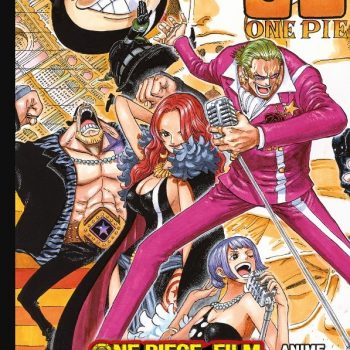 The second e last volume of the anime comics based on the blockbuster film of the same name, written and drawn by Eiichiro oda: ONE PIECE GOLD: THE FILM - ANIME COMICS! He will succeed Luffy to save Zoro, before he is executed by Gild Tesoro? Find out starting May 30 in the comic store, bookstore and Amazon.


Zoro was taken prisoner by Gild Treasure, terrifying patron of Great Treasure, and the time when he will be publicly executed is now near. Ready for anything to save him, Luffy and comrades engage in mortal combat: how will the decisive battle against the emperor of gold, who longs for total domination, end ?!

From 30 May ONE PIECE GOLD: THE FILM - ANIME COMICS n. 2 will be available in the comic store, bookstore and Amazon!

Eiichiro oda, born in the Japanese prefecture of Kumamoto in 1975, with ONE PIECE is the author of the best-selling manga in history. Passionate about comics since he was a child, he has Akira Toriyama as a model; after having won several awards at a young age (including second place at the Tezuka Prize and the Hop Step Award), in 1997 he began working on his most famous manga, hosted in the pages of the magazine "Weekly Shonen Jump", at the which still continues uninterrupted.

Do you want to complete all the achievements and trophies and know all the tricks, guides and secrets for your video games? SoulTricks.com is a group of video game fans who want to share the best tricks, secrets, guides and tips. We offer the best content to be a source of useful information, so here you can find guides, tricks, secrets and tips so you can enjoy your games to the fullest. Are you ready to get all the achievements of that game that you resist so much? Enter and enjoy your favorite video game to the fullest!
Watch Dogs, system requirements for PC ❯

My Love Story !!, the manga by Kazune Kawahara and Aruko will arrive on February 28th

Add a comment from Star Comics, the second volume of ONE PIECE GOLD: THE FILM - ANIME COMICS is coming!