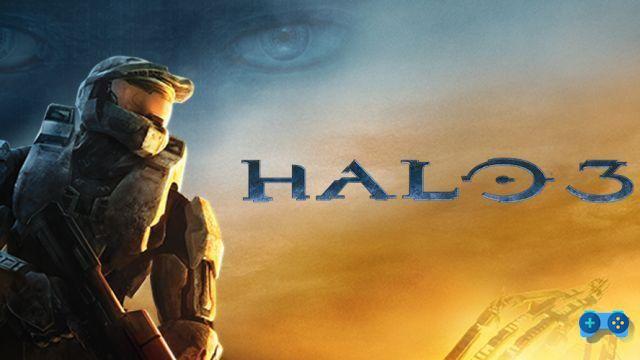 A few weeks after the release of the last chapter of the Halo franchise: Halo wars and on the occasion of the entry of the title in the "Classics" series, we present the review of the third chapter of the best-selling and loved FPS in history: HALO 3

The time has come to end the battle

"Master Chief, may I ask you what are you doing on that ship?", "Sir, I'm putting an end to this battle." Thus ends, with a majestic final movie that leaves fans of the title with more than one question, Halo 2, a title that made the fortune of Microsoft's first home console and decreed the definitive success of the franchise that already from the first chapter he had been able to astonish for his ability to involve and the ability to transport a genre, hitherto almost exclusively the prerogative of desktop computers, even on consoles. Almost three years later, the time has come to put an end to the coveted conflict between Humans and Covenant, with the third wheel represented by floods.

The plot therefore resumes shortly after the final events of the prequel, with Master Chief, the undisputed protagonist of the saga, who "lands" on earth in his own way, as if it were a normal asteroid. Recovered by the army commanded by the stainless Johnson, and accompanied by the Elite race of the Covenants who have rebelled against the betrayal of Brutes and Prophets, it is time to prepare the offensive that will have to end hostilities once and for all. Betrayals, deceptions, twists and turns, heroic acts are not lacking in the script of Halo 3 which reveals itself, in fact, as the worthy conclusion of one of the best shooters ever.

The solidity of the gameplay demonstrated in the first two episodes is revived in a high key potentially also in Halo 3. The skilful mix of Halo and Halo 2 in which sessions on vehicles, on foot or aircraft were protagonists come to life in an intelligent structure that rewards tactics , the originality and above all the freedom of the gamer.

The technical sector, with its vast and practically infinite environments definitely helps in this. The enemies, in fact, are not shown on the screen through a sequence that makes them enter practically in "turn", as happens in 95% of products of this genre and also in the two prequels. Halo 3 goes further, gives the real and clear feeling of being in a suffered conflict and the covenants always appear massively and, above all, all together.

What happens in titles such as Call of Duty, Killzone, Medal of Honor or in any case all those shooters that push a lot on the spectacular but leaving space for particularly scripted events, Halo 3 is not present. The new Bungie masterpiece is rather a huge "sand-box" where no action is foreseen by a code, but it is simply the gamer's job.

Any enemy, from the most enormous to the smallest one, can be eliminated with any weapon, obviously with the due limits (destroying a scarab with a gun is not impossible but simply very, very difficult. And it all also depends on the way in which you will approach the battle. Decide how to use what the scenario provides you to complete the levels. Situations that are always varied, engaging and full of cinematic pathos are the staple of the saga and of Halo 3, commendable in its intent to make the player practically the protagonist of a huge Hollywood blockbuster.

Solemnly hot and never boring sequences, interspersed with splendid videos made using the powerful game engine, make the new Bungie product a driver towards whirlwinds of emotions that few titles of the genre are able to give: thanks also to a practically perfect level design the which manages to give settings that are always different from each other and never the same or repetitive (except in rare cases) where in them you will give an end to this painful battle.

Halo 3 follows a fairly enviable line of logic that simply states: “I give you weapons, settings, enemies and scenery. How to eliminate them is up to you to decide. ". Turning the sentence into a practical example, if in Call of Duty the destruction of a tank or a station is still decided by the plot, by a script or by the decision of the game, in Halo 3 it is instead a simple matter entrusted to the player. You don't have to destroy that tank with a time bomb. No, you can steal a tank nearby, use normal or fairly powerful weapons, destroy it piece by piece, throw the driver out and then decide to leave the vehicle intact anyway and use it yourself. In short, every battle or situation is always different. Nothing is left to chance, also thanks to a splendid artificial intelligence of the enemies who will not act as real "idiots" clearly guided by pre-written codes. No, they also adapt to the situation.

To the scenery and what happens around them. If surrounded, they flee from fear or experience one last kamikaze attack. If in mass they divide in an intelligent and above all always different way. In any case, the allies warn, however, of the series "the more we are, the better".

Halo 3 is not limited to single player. Especially in mind of the enormous success of Halo 2's online multiplayer, capable of disintegrating authentic records on Xbox Live. And, the sequel, it does even better. It also transforms the player into an engineer or simply a director. How? Thanks to the two impressive innovations created by the development team, represented by the “cinema” and “forge” modes. As the name suggests, the first allows you to completely record your games (both offline and online), thus giving the possibility to relive the most exciting moments of the campaign through a completely free camera that will make you really wander throughout the level, thus denoting also the immense technical complexity of the technical engine capable of giving truly large settings.

Or to review the games with your friends, in order to "bully you" for some notable kill or victory of bullying. If, on the other hand, you want to squeeze your brains out to make the most of all the technical potential of Halo 3, the Forge mode comes to your rescue. Here you will have the opportunity to create completely customized maps, in every sense. Practically a game within the game, since the best have already shown that they can even carry out American Football matches with historical characters from the Halo saga. Of course, you can decide on any rules, both physical and playful, and then share your creations with friends.

For the rest, the online service of Halo 3 is simply potentially high compared to what was seen in Halo 2. A good number of maps, excellent matchmaking and many modes make it practically an infinite title on Xbox Live.

The technical sector of Halo 3 is perhaps that aspect of the title that will leave fans discussing for weeks, months and probably even years. Visually it does not impress too much but plays its card more on solidity, on substance than on smoke. It is an excellent roast seasoned with a fair amount of smoke, we would dare to say. The amount of objects and enemies on the screen that it manages to give is incredible, accompanied by a vastness of the practically devastating environments that literally leaves you stunned. Everything holds up to a fixed 30 FPS without ever particular smudges, thanks also to a skilful mix of particle effects, high definition textures and lighting system that has no equal in this generation. The only flaws that we would like to point out concern a visual aspect that is sometimes disappointing, perhaps the fault of the polygonal scarcity of the other characters, rather poor and not very far from what we saw in Halo 2.

Applause, only applause for the sound aspect. Martin O'Donnel's stunning soundtrack is accompanied by screaming sound effects and a focused and engaging Spanish dubbing. And the musical support in every playful situation is simply spot on and perfect, to make the player feel the real protagonist of the events.

Halo 3 is presented as one of the best games of this generation and a great tribute to the entire trilogy, which has now come to an end. Perhaps the best artificial intelligence seen on Xbox 360, as well as gameplay that in the genre has no equal, supported by a majestic and engaging sound aspect, go to a solid and convincing technical sector. On top of that, online makes Halo 3 practically an infinite title, thanks to the splendid Forge and Cinema modes and the numerous types of games to face fans from all over the world. The last call to save the earth has arrived, you just have to grab it. 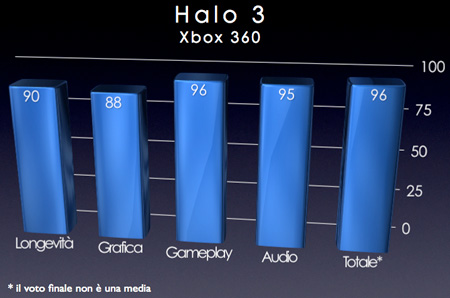 BloodStained: Ritual of The Night: Classic and crossover modes ❯

Xbox 360 Review, A Thousand Years of Dreams in Lost Odyssey