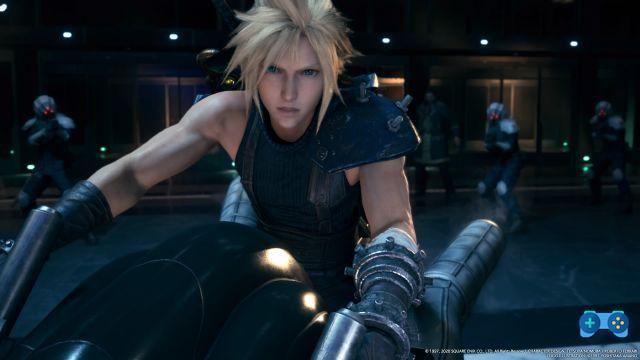 Even before the game was officially released, its ending was already being discussed. But what does it really mean?

Final Fantasy VII Remake has been one of the most anticipated projects in recent years and which has been most talked about in recent weeks. Due to the quarantine in which we all find ourselves, for problems related to shipments the game is arrived to many well in advance. For this reason, many discussions have opened up on the net about the last chapter of this Remake even before all the players could have it in their hands. But what happens in this much-discussed ending?

Obviously there will be to follow HUGE SPOILERS, both on the Remake and on the original game and its PSP spin off, Crisis Core: be warned.

If you are interested in other themed content Final Fantasy VII Remake, we recommend that you take a look at our coverage of the game. You will surely find what you are looking for.

For all the approximately 35 hours of gameplay that precede chapter 18, the plot of Final Fantasy VII Remake it follows quite faithfully that of the original, expanding and deepening, but detaching very little. Which we are all more or less very happy about. The unexpected - and shocking - comes at the very end. At the end of the highway through which we escape from Midgar, after the boss fight on the bike, he is waiting for us a new, unprecedented clash than the original.

The Numen and destiny

The Numen - in English Whisper - are one of the main novelties of the remake compared to the original game, and the closer you get to the end, the more their presence becomes constant. It will be explained to us by Red XIII that these beings are i guardians of fate, whose task is to enforce the pre-established course of events. Practically, these Numen are us. We gamers who are passionate about the original Final Fantasy VII, we want the remake at all costs follow the plot faithfully. 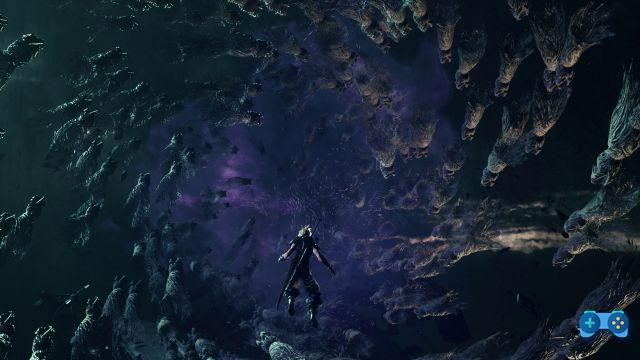 For this reason Barret is brought back to life - in a rather trivial way - while Wedge is apparently dragged to his death. A destiny, the one already written and protected by these entities, that will eventually see Sephiroth defeated. Precisely for this reason, once our daring escape from Midgar is over, this war hero now in the throes of omnipotence will ask us to challenge fate.

Sephiroth was one of the bravest SOLDIERS during the war against Wutai, antecedent event 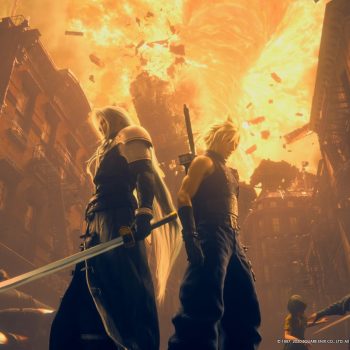 about 10 years of the history of the game. Later he discovered that he was the result of genetic experiments carried out through the study of Jenova, an alien entity that crashed on Gaia long ago, causing the extermination of the people of the ancients.

In an event dating back 4 years before the events of Midgar, for a strange circumstance of its own Cloud will inflict a mortal wound to the legendary soldier, after Sephiroth in the grip of madness had burned the native village of the protagonist and was intent on escaping with the body of Jenova. But he somehow survives, by his nature as an experiment, keeping his consciousness in lifestream of the planet, later succeeding in regaining body shape. For this reason it is therefore inextricably linked to Cloud.

Sephiroth, returned to retake Jenova, now transcends the limits of an ordinary man, and is therefore the only one aware of the course of events predicted by fate. The others only have flash forwards when they come into contact with the Numen. Precisely for this reason at the end of the highway we will have to to challenge fate. We will be catapulted into a sort of astral plane, an extradimensional reality, where we will face a gigantic titan, guardian of the future.

Fighting the future for free will

Our group is then placed in front of three giant guardian minions, probably symbolizing Cloud, Tifa and Barret. By analyzing these three enemies we can in fact discover that these are entities of a future timeline, manifested in the present to defend the reality that generated them. A representation of the protagonists of the future, who fight for destiny to be fulfilled. On the other hand, the protagonists of the present fight for the freedom to alter the course of events. On the one hand the historical fans of Final Fantasy VII, for whom the original material is untouchable, on the other Nomura and the desire to reinterpret it.

By defeating the guardians of destiny in this Singularity, we are effectively defeating destiny itself. In this way we question what are the events traced. Basically Square Enix - which translates in this case to Tetsuya Nomura - used this expedient of meta-fiction to explain that in the future Final Fantasy VII Remake could take roads different from the one that fans remember, told in '97.


After this fight, we will have to face one last one, right against the fearsome One Winged Angel: Sephiroth. The fight it traces in a rather evocative way some moments of the final boss fight of the original game, which obviously happens much later in history. In short, pure fan service, however appreciable it is. At the end of the fight, the characters actually drift away from Midgar, but now they go on a new and unknown journey, as is repeatedly emphasized.

Who is Zack Fair?

During the last chapter of Final Fantasy VII Remake we can also admire in some scenes a black-haired SOLDIER holding the Buster Sword. This man, who will be unknown to the novices of the series, is one of the pillars of the story of the original game. He just didn't have it a love story with Aerith, but is also with Cloud when he mortally wounds Sephiroth, and together with him will later be used by Shinra for experiments.

After four years Zack will be able to free himself and again together with Cloud, now heavily intoxicated by the Mako, will try to flee to Midgar. The scenes that we can see in the finale of this remake match almost perfectly with the ending of Crisis Core, the prequel that puts us in the shoes of this first-class SOLDIER. 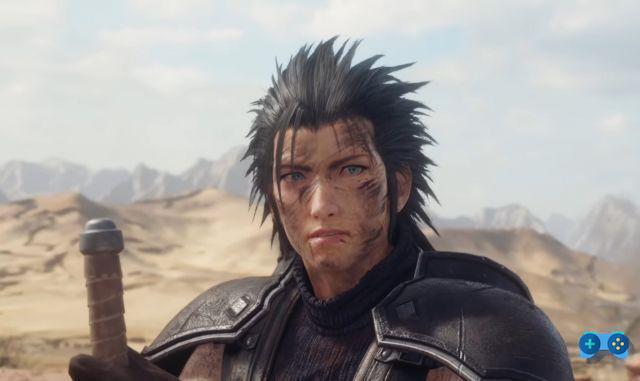 The key difference is that in the PSP prequel, as well as in the original game, Zack Fair died in the clash with the forces of Shinra. With his last strength he entrusted his sword and his inheritance to Cloud, who then headed confused towards Midgar: in his head that was already created. personality overlap which will cause him those constant visions.

In the finale of this remake instead Zack appears to survive. Furthermore, as he fights, the city enveloped by the Numen can be seen in the background, as if to indicate that the event we are experiencing is somehow going beyond dimensional limits.

A widespread theory is that therefore the reality in which Zack survives is a parallel. Also for this reason, during the last frames we see the protagonists and the two at the same time 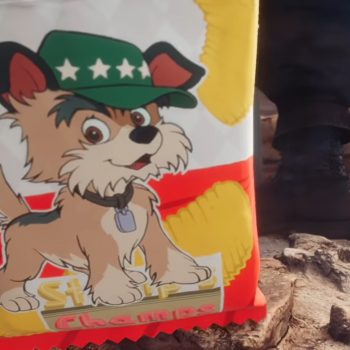 soldiers cross each other and somehow sense each other's presence. This theory is also supported by a fluttering object, framed slowly and in the foreground during the scene with Zack. What it looks like a packet of chips in fact, it has a printed dog in military dress, the symbol of Avalanche. However this is it of a different breed than the one in the graffiti that we saw during the game. According to many fans, it would symbolize the existence of two distinct realities, one where Zack is dead, where the events of the game take place, and another where he is alive and we don't know what happens.

As bizarre as this theory may seem, it may not be far from reality. It would at least explain the senselessness of the appropriate rewrite of the ending of Crisis Core, a memorable scene, printed on fire in the minds of the players.

Towards a new destiny

In conclusion this Final Fantasy VII Remake ending seems more a declaration of intent on the road that the series will take.

In fact, it seems to want to question future events, making them unprecedented even for historical enthusiasts. In truth everything seems to point in the direction of a complete overhaul, which would involve unhinging the key points that made the seventh chapter so important for an entire generation.

Obviously for now they are only deductions and speculations, even if Nomura is not new to the overcrowding of the narrative planes and a very relative concept of death ... We must also see if Square Enix will take into account the chorus of dissenting voices that rose against this ending. Which must be said, it is actually alienating. Mainly because it appears totally disconnected from the rest of the remake.

The final boss fight already stands out aesthetically in the singularity, with a design that looks recycled from that of the Kingdom Hearts, alien to the combination of the world of Final Fantasy VII. Not only the design of the enemy, but all the combat is much less realistic than in previous chapters. A fight much closer to what we saw in Advent Childern, the sequel to the seventh chapter. A much more Japanese choreography and style, much exaggerated, than somehow they break the suspension of disbelief of the player.

But it is obviously not just an aesthetic problem. All the emphasis on destiny and free will, coupled with parallel realities, is completely foreign to the narrative of the seventh chapter. A series of classic narrative topoi of Japanese stories, very distant from what the plot of Final Fantasy VII represents. 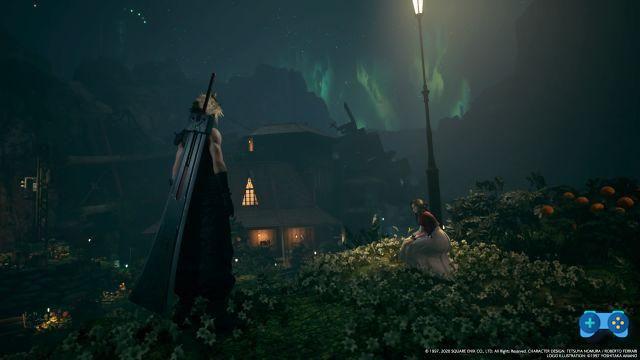 It therefore remains an ending somewhat different from what precedes it, vaguely dissonant with a game that is otherwise almost the perfect remake. A chapter 18 that will certainly continue to do a lot of discussion about itself. But above all an ending that leaves us with curiosity and fear how events will evolve in the future.

6 best programs to speed up your PC for free ❯