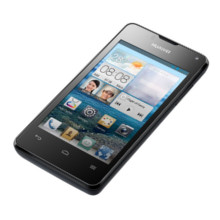 Top of the range among the entry-level Android.

Huawei, a Chinese company that is gaining more and more prominence in the field of communications, overtook Nokia in 2013 in terms of the number of terminals sold, placing itself third in the market, increasingly saturated with brands and models, of mobile phones and smartphones.

The great success of this brand is undoubtedly due to good quality low and mid-range products, sold at very competitive prices. Although it has not yet managed to establish itself in the top of the range, Huawei is in fact a very valid alternative for those looking for a smartphone at affordable prices but which also has features that do not require too many compromises.

Having therefore made this necessary premise, let's move on to the actual review of ours Huawei Ascend Y300, the entry level smartphone of the Chinese house.


The operating system pre-installed is Android 4.1. It has dual cameras, 0.3MP front and rear 5MP with flash LED.

The packaging of the Ascend Y300 externally is white and spartan: upon opening the box we find the phone, the lithium battery, the well-made earphones, the USB-micro USB cable, the socket with USB input to charge the battery and a small user manual. 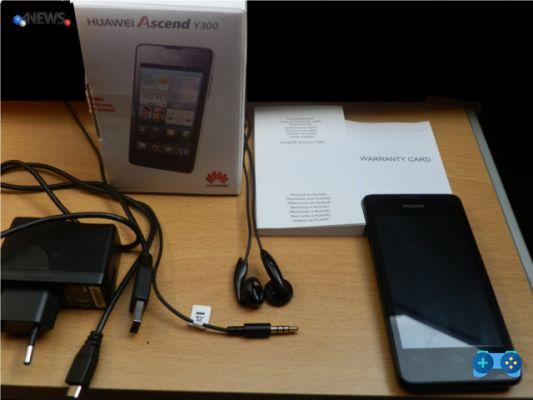 The smartphone shows immediately really good build quality and ergonomics, thanks also to the non-slip back cover that is very pleasant to the touch. Removing the back cover, we find the housing for the micro SD card and the classic SIM card (but we were also able to use a microSIM without the need for an adapter); the latter can only be inserted when the battery is not installed. In the rear area we also have the 5 megapixel camera, the LED flash and the system speaker.

On the front we find the VGA camera and the three capacitive function keys, while on the sides (respectively on the right and left) we have the micro USB port and the volume control keys. Above we have the 3,5mm jack for headphones and the power button, below we find the microphone.

Our model is Wind brand then when it is switched on it presents the logo of the telephone operator (together with the “My Wind” application, it is the only sign that manifests the branding) and the optimization of the applications begins. After configuring the various accounts, we finally access the Huawei launcher.


The 4 ″ screen is well defined in its 800 × 480 pixels and with a good brightness indoors; viewing becomes more difficult in direct sunlight due to a not high enough maximum brightness, but we were still able to use it even on the beach.

Il Huawei launcher has the peculiarity of not having the application drawer: we did not miss it, but if you really can't do without it, just download one of the free launchers from the Play Store to solve the problem (you don't need to root the device).

Scrolling through the various pages we notice a really good general fluidity and the touch responds very well to our commands. The wi-fi signal takes very well and also receives the 3G / HSPA signal very well.

The phone uses the operating system 4.1 Android Jelly Bean and a usable internal memory of 2.16GB (on the total 4GB), but it is expandable up to 32GB via a microSD card.

Huawei confirms that it is careful to create products that perform their primary function well: since we are dealing with a mobile phone, we are obviously talking about calls and text messages.

Phone with Ascend Y300 it is really a pleasure, the audio is clear and clean and even our interlocutors have heard us well. Some network users complain of frequent line drops that make it impossible to make and receive calls; during the two weeks of testing, however, we never encountered this problem which we report anyway for completeness.

Too bad the audio of the speakerphone (and consequently of the ringtone) is a bit low, while with the headset we confirm the good quality of the incoming and outgoing audio.

Also the messaging it is good with the default possibility to choose between Huawei keyboard and Android keyboard: in both cases the text entry is precise and we ran into very few errors even writing quick messages.

The Y300 is a smartphone and as such internet browsing, like phone calls, must be and is a priority: already with the stock browser we notice a good navigation fluidity, with a good loading speed even for the heaviest pages. (and of the sites in the "Desktop" version); the low resolution does not make it easy to see more complex pages, but a good zoom function through "pinch to zoom", "pan" and double tap allows you to resize the page in the most readable way in a short time.

The compartment e-mail offers us the classic Android client, which also allows reading and viewing of emails in HTML, without however allowing a complete zoom out, forcing us to scroll the page even sideways to view the whole message. The synchronization with the server is excellent and it is easy to configure the various e-mail accounts in our possession.

It is the department that has the greatest gaps in a terminal that is otherwise really good, but even in this part we reach a full sufficiency.

La camera 5MP rear does not have great customizations, but allows you to take discrete photos with a good shutter speed.

I video they can be shot at a maximum VGA resolution of 640x480p with focus and the recording is discreet, but nothing more.

The video player can play video up to 480p (the resolution of the display) permittingly; with higher resolution we have often encountered display problems, with jerks and freezes in playback.

The audio quality in mp3 playback with loudspeaker is quite good, even if the volume is a bit low when using the rear loudspeaker; with headset it becomes decidedly good.

The battery is one of the strengths of this product: with a fairly intense use we arrive safely at the end of the day without activating the energy saving options.

With a more prudent use, you may also be able to end a second day before having to recharge our phone. 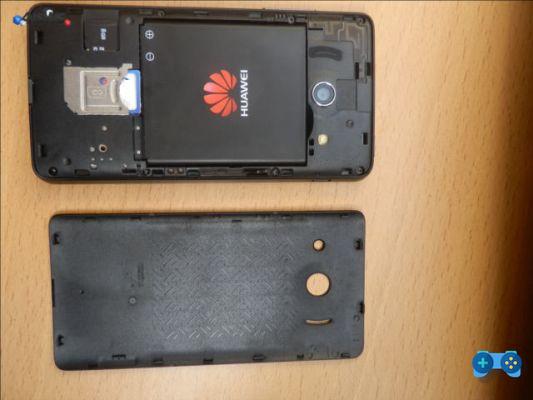 Huawei Ascend Y300 is undoubtedly a smartphone with an excellent value for money. Sold at a list price of 129€ (although it is difficult to find in physical stores: we found it after several attempts only in the Wind store within an Expert center), it is a very performing entry level terminal, unbeatable as a forklift but also usable as a main telephone by those who do not wants or cannot spend a fortune to have the latest top of the range on the market. It provides good performance in all departments, only partially stained by a not very high brightness and by a multimedia compartment that is just discreet and with some shortcomings. Hard to find better at this price!

- Audio with a little low speaker

The product has been available since April 2013.