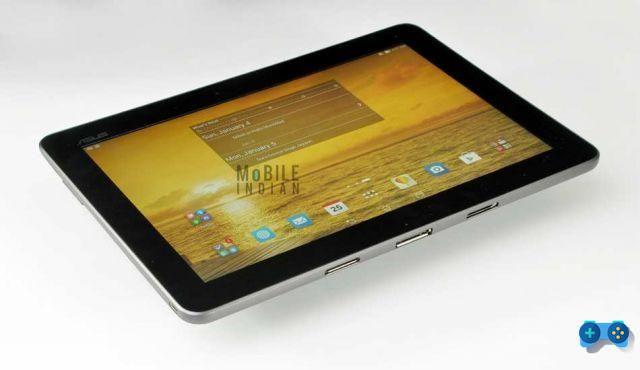 Marketed since last summer, the Transformer Pad Asus is a mid-range tablet with an Android operating system (in appearance very similar to the T100, which however comes with Windows), which can be used as a laptop if necessary thanks to the optional keyboard. The tested version, with 16GB of internal memory and 3G connectivity, is sold at a list price of € 299, without keyboard.

The packaging of the Transformer Pad TF103CG is minimal and contains, in addition to the tablet, a USB-micro USB cable, a power adapter, a paperclip for ejecting the Micro-SIM tray, the first use manual and the warranty certificate. .

Rear view: the body, designed for a horizontal orientation, is in white polycarbonate (also available in the black version) with a non-symmetrical gray frame. The Asus logo, silver and in relief, is placed in the center. At the top we find 2 MP rear camera, microphone and on / off button. On the left side there is the slot for the Micro-Sim card and the 3,5mm jack port. On the left side there is a microSD reader, the volume buttons and, at the bottom of the frame, the micro USB 2.0 port. On the sides we also have the two audio speakers. In the lower part, placed directly on the frame, we find the two hinged holes for the keyboard and the dock door.

Asus Transformer Pad TF103CG mounts an Intel Atom Z2560 Dual Core 1,6GHz processor with Intel Hyper-Threading technology, capable of ensuring good performance despite the only GB of RAM available. The device proved to be fluid even in stressful situations, returning acceptable feedback even in the use of games.

The 16 GB internal memory, of which about 4 are dedicated to the system, offers sufficient storage space, which can be easily increased thanks to the micro-SD slot (up to 64GB).

The non-removable 5070MAh battery guarantees approximately 8 hours of use. Good Wi-Fi reception, as well as that in 3G.

The viewing angle of the 1280 × 800 resolution IPS screen is very good. The pixel grid is not perfect, as is the color reproduction, but we are still on more than discrete levels. Adequate maximum brightness, which can only be adjusted manually (no brightness sensor). Good sensitivity of the touch-screen panel.

Two o'clock are insufficient cameras. If the front camera plays the role of webcam very well (in 4: 3), the rear one from 2MP (which drop to 1MP if you want to shoot in 16: 9 format) does not guarantee acceptable images even in optimal light conditions. Not much sensitivity either (maximum ISO 800; 200 for the front camera). The stabilizer does its duty, but the autofocus is missing. Also absent the LED flash. The rear camera is able to shoot videos, even in HD, but, although the possibility of zooming during recording is appreciable, the final quality is rather poor.


On the other hand, the audio and video reproduction is good, with the speakers placed in an ideal position for viewing while using a support base. Unfortunately, the absorbent surfaces make listening less enjoyable. You should also be careful when playing if you are holding the tablet in your hand, since it is easy to unintentionally go and cover the speakers with your fingers.

Despite initial doubts, the Zen UI Asus it turned out to be pleasant and intuitive even on the Android operating system. Navigation is fluid, although zooming and quick scrolling within pages isn't always flawless. Good compatibility of the device with the most important software on the google store, even if a couple of clarifications are necessary.

Showcase Asus Plus, first of all, it makes the use of applications such as WebStorage cumbersome, requiring registration only for two reasons: access the additional GBs on the cloud and install SkyGo. In fact, the app cannot be installed from the Play Store. Those wishing to use the competing service (Premium Play), on the other hand, will be disappointed by its total absence.

Also disappointing is the Dual App mode, which barely supports a handful of applications and does not allow the simultaneous display of two web pages.

Asus Transformer Pad TF103CG is a tablet devoted mainly to the use of web content and productivity, aimed at that segment of users who prefer the range of Android applications to what is offered by Windows (there are few, on the hardware side, the differences with the T100 series). Reactive and versatile, thanks to the possibility of connecting it to the keyboard (sold separately), this 10-inch has its Achilles heel in a bad dual screen management of applications and in an insufficient photographic sector.


Given the price and general performance, however, it is still a valid alternative, to be kept in mind if you are looking for a mid-range Android device.